The Irishman who 'invented' milk chocolate, and served the royal family 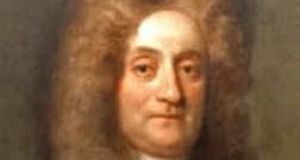 With the Duke and Duchess of Sussex visiting Dublin this week, it’s worth recalling the remarkable life of an Irishman who enjoyed unparalleled access to the British royals. Sir Hans Sloane, personal physician to three British monarchs.

Sloane was a exceptional individual. Not only was he among the most prominent doctors of his generation, but on his death he bequeathed his personal collection of 71,000 curios to the British nation which, along with two other notable acquisitions, constituted the founding collections of the British Museum, the British Library and the Natural History Museum.

He is also best remembered, somewhat erroneously, as the man who invented milk chocolate, though it was actually first introduced to Britain in the early 1660s.

Yet he was an unlikely candidate for royal physician. The seventh son of Alexander Sloane, an estate manager for the Hamilton family, he was born in the small town of Killyleagh, Co Down in 1660. An inquisitive child, he was particularly interested in natural history and often wandered the countryside gathering plant specimens across the county. When he wasn’t adding to his burgeoning botanic collection he spent much of his free time in Killyleagh Castle’s extensive library, reading voraciously.

After the death of his father, Hans’s upbringing was entrusted to the Hamiltons, who recognised his natural aptitude for learning and ensured he received a fine education.

His relationship with the Hamilton family proved fortuitous when he moved to London at the age of 19 to study medicine. It meant he was permitted to move in the same circles as another eminent Irish aristocrat, Robert Boyle, the son of the Earl of Cork and a man frequently celebrated as the father of modern chemistry. Boyle grew fond of Sloane and often assisted him with his studies. In 1684 he graduated from the University of Orange with a Doctorate of Physics, before returning to London where he was made a Friend of the Royal Society and became the assistant to England’s most prestigious physician, Thomas Sydenham.

He developed a bond with the new Princess of Wales, and ensured her daughters were inoculated against smallpox, a revolutionary new procedure at the time

His reputation grew throughout the year, so much so that he was appointed surgeon to the West Indies fleet and personal physician to the incoming Governor of Jamaica. Sloane would spend four years in the Caribbean before returning with a large collection of plant specimens and a sizeable consignment of cacao and Peruvian bark, both highly sought after medicinal remedies among the upper classes.

He made a sizeable profit selling his new products, which enabled him to establish a fashionable medical practice. This, along with his network of wealthy patrons centred on the Duchess of Albemarle, ensured he came to the attention of the royal family.

In 1712 Sloane was appointed physician-extraordinary to the invalided Queen Anne, and is said to have been responsible for prolonging her life long enough to ensure the succession of her cousin, George I. His efforts did not go unrewarded, as he continued as royal physician under the new king, and in 1716 became one of the first physicians to be made a Baronet.

He developed a bond with the new Princess of Wales and ensured her daughters were inoculated against smallpox, a revolutionary new procedure at the time. Before it could be carried out on the royal family, the treatment was trialled on six condemned criminals who were promised a pardon by the king should they survive.

In order to ensure the results were genuine, one of the prisoners was also made to lie in bed with a person suffering from severe smallpox in Hertford, then a breeding ground for the disease. Luckily they survived. Further inoculations were then carried out on orphans and even on Sloane’s own grandchildren, before the princesses were finally vaccinated in 1722.

When their grateful father George II took the throne in 1727, he promoted Sloane to physician-in-ordinary, “having been before constantly employ’d about the whole Royal Family, and always honour’d with the Esteem and favour of the Queen Consort”.

Sloane helps to illustrate the crucial role medical practitioners played in early 18th century society. In the wake of James II’s overthrow, they were among the privileged few with intimate knowledge regarding the health of the reigning monarch - information that could stir rebellion or even signal an invasion. Their discretion, or lack of, could change the course of history. That the 18th century was one of Britain’s most peaceful is in many ways thanks to their unseen efforts.

Lockdown Halloween: the safe way to have grisly fun
5