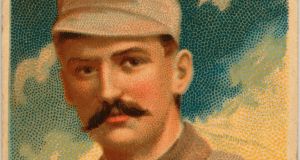 In 1888 Mike 'King' Kelly published the first autobiography ever written by a baseball player, and his fame reached new heights.

While Conlon may be considered an anomaly in the sport today, there was once a time when being an Irish player was much less noteworthy; in fact, it was almost the norm.

In the last 20 years of the 19th century, the Irish dominated the game, with more than 40 per cent of NBL players boasting Irish heritage; baseball’s so called “Emerald Era”.

The children of famine-era emigrants, they saw sports as a means to gain acceptance and assimilate into US society

Typically the children of famine-era emigrants, they viewed sports as a means to gain acceptance and assimilate into US society while earning enough money to provide for themselves and their families. Yet they also enjoyed the excitement of the game, and some relished in their new-found celebrity status.

One player in particular stood taller than most, the legendary Mike ‘King’ Kelly.

The son of Irish immigrants, Kelly was born in 1857 in Troy, New York and grew up during the American Civil War, in which his father served with the Union Army. After the war he was stationed in Washington DC before being forced to retire due to ill health. The family then settled in Patterson, New Jersey where tragically Mike was to lose both his parents before the age of 18, which had a profound effect on him.

While his mother had attached great value to her child’s education, Kelly showed much more promise on the ball field than he did in the classroom, and threw himself into the sport wholeheartedly. He also had a passion for amateur dramatics and knew how to entertain a crowd, a skill that would prove useful throughout his career.

By 1875 Kelly was playing semi-professionally for the local Paterson team before eventually breaking through to the big leagues when he signed for the Cincinnati Reds in 1878. The club quickly ran into financial difficulties, however, so Kelly signed for the Chicago White Stockings after two seasons.

It was here he really came into his own. He would stay in the Windy City for seven years and guided the team to five pennants, becoming the best catcher in the league and a firm fan favourite.

Baseball itself was then undergoing a transition, with clubs constantly demanding greater levels of fitness and dedication from their players, something Kelly had not experienced until his arrival in Chicago, but a challenge he soon embraced.

Off the field, Kelly liked to live the high life, lodging himself in the decadent Palmer Hotel, then the epicentre of the city’s thriving social scene and frequent haunt of Mark Twain, Oscar Wilde, Ulysses S. Grant, Eleanora Duse and many more. Maintaining such a demanding lifestyle left Kelly constantly out of pocket and his frequent demands for a pay rise soured his relationship with the club’s manager, Albert Spalding, who decided to sell him to the Boston Beaneaters in 1886.

A shrewd negotiator, he sold his star catcher for a record $10,000 transfer fee plus a $5,000 salary for Kelly, an annual income equal to that of a US senator. The transfer fee was so outrageous that the cheque was displayed in a storefront window to silence the sceptics and build-up Kelly’s profile before his arrival.

Once in Boston, Kelly’s fame only increased. The local fans quickly embraced him and his somewhat unorthodox style of play. Instead of running all four bases, Kelly would often skip the third base while the umpire’s attention was diverted and slide to the home plate - much to the chagrin of the opposing team. This delighted the fans who would chant “Slide, Kelly, Slide!’” from the sidelines. The chant would become the title of America’s first pop song and was soon sung all over America.

In 1888 he went on to release the first autobiography ever written by a baseball player, and his fame reached new heights. In 1890, his friends and supporters even raised a popular subscription to enable Kelly to purchase a $10,000 house and a new horse and carriage, though due to Kelly’s dismal management of his personal finances, it would be seized and sold in 1893 for unpaid taxes.

During the off season, Kelly rekindled his love of theatre and would often perform on the Vaudeville stage

During the off season, Kelly rekindled his love of theatre and would often perform on the Vaudeville stage, appearing more often as his playing career came to an end.

He died of pneumonia in November 1894 while on his way back from New York to perform with the London Gaiety Girls. Some 7,000 people came to pay their final respects to him, and in 1945, he was inducted into the National Baseball Hall of Fame - fitting recognition for the "King of the Diamond field".