'The Irish are lauded in Pittsburgh, to an almost embarrassing extent'

Working Abroad Q&A: Maeve Rafferty works as an environmental educator in the US 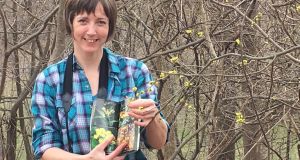 ‘I miss the sight of a bluebell wood in May, but now I love the trout lilies, trilliums and bloodroots that come with the Appalachian territory’ - Maeve Rafferty is learning to appreciate Appalachia by getting down and dirty

Working Abroad Q&A: Maeve Rafferty, originally from Co Tyrone, works as an environmental educator in Pittsburgh in the US.

I left in 2010 to take a career break and to accompany my ex-partner who had been offered a job in Pittsburgh. I travelled on a tourist visa, expecting to stay for a maximum of one year, and my ex availed of a J1 visa opportunity that allowed residents of Northern Ireland to work in Pittsburgh in Pennsylvania in the green technology/sustainability sector. (The programme is no longer available, unfortunately). Our relationship didn’t survive the US experience, but both our lives took some unexpected, and ultimately happy turns. I’m now married to an American and my ex is engaged to a lovely lady he met on Saint Helena island, a UK Overseas Territory in the Atlantic, and they’re both currently working in New Delhi.

Yes, I studied at UCD and graduated with a BSc in Environmental Biology in 1999.

What are you doing now?

I currently have two part-time jobs in the environmental non-profit sector in Pittsburgh, both of which are education focused. My time is split between delivering nature-themed lessons for a land conservation organisation and co-ordinating a volunteer development programme for adults seeking to actively improve their local environment.

Kids are more clued in than their parents to environmental issues

I’ve been back in the classroom since March, after a winter hiatus - the teaching work slows during January and February - introducing Kindergarten through to second-graders to life cycles and metamorphosis, the world of creepy crawlers and the intricate business of nest building. I do this work for Allegheny Land Trust, a non-profit that preserves green space and wildlife habitat and helps to reconnect people to nature through its excellent education department.

My other main employer is Pennsylvania Master Naturalist. This organisation, also a non-profit, works with partners at various training sites across Pennsylvania to build a corps of knowledgeable, motivated volunteers ready to tackle local environmental issues. My role as programme coordinator for the region is better described as volunteer management than teaching, although I do help to ensure the initial 50-hour training runs smoothly and teach a small part of the course.

Tell us about the environmental education programmes you now deliver to children and adults. What does that involve?

Allegheny Land Trust has a wonderful collection of natural artifacts or “biofacts” available for the classroom lessons, so I’ll have access to things such as a praying mantis egg case, part of a paper-wasp’s nest (empty, of course), or a selection of abandoned bird’s nests. Most of the children love to touch this stuff, and even the squeamish ones usually come around when they see their peers handling shed snake skin without ill effect.

I lead guided walks on Land Trust properties for adult and family groups: a spring wildflower walk in a wooded valley along one of Pittsburgh’s three rivers and a fungal foray on a small island in another river, the Allegheny.

During Master Naturalist training, I introduce the adult trainees to the concept of ecoregions, a way of classifying the landscape and its patterns of soil, rock type, plant communities etc. The Pittsburgh area falls within the Appalachian Forest ecoregion, although you wouldn’t necessarily think that driving by all the malls and industrial complexes on the outskirts of the city - you have to get off the main roads to see the fragments of intact habitat that remain.

Is it different working with children than adults? Are children more switched on to environmental issues?

The adults I teach come because they’re interested in the natural world around them, so there’s a bit of self-selection going on there in terms of the audience. I’ll often learn a thing or two from adult participants as well as being able to teach them. The children in rural areas, just like in Ireland, know a lot more about nature than their urban or suburban equivalents, but I work mostly with younger primary school children. I’ve heard other educators say that the kids are more clued in than their parents to environmental issues and this is probably the case for the pre-teens and upwards children.

You worked in a “Tree Nursery” growing native trees and shrubs for city reforestation projects. What did you do?

I wanted to know what trees I was looking at when I first came to Pittsburgh. I’d come from a place where I had a good handle on the native flora to a place where I knew nothing. That was really the catalyst for me finding Tree Pittsburgh and my first paid job in Pittsburgh. I worked for five seasons as a nursery technician, learning mostly on the job - the art of seed collection, treatment and storage, pruning for healthy root systems, the delicious smells of the roots of magnolia, pawpaw and some of the other species we grew, how to dress for the crazy fluctuations of Pittsburgh weather, techniques for outwitting deer, groundhogs and mice, the dos and don’ts of watering, how to put plastic on a polytunnel, which tree would be the best choice for a customer’s garden, and, yes, I learned to identify many of the trees I’d first seen in Pittsburgh in their adulthood as well as their infancy.

There are supposed to be less than 100 Irish-born people living in Pittsburgh and I know at least five of them. The Irish are lauded here, to an almost embarrassing extent. The St Patrick’s Day parade is one of the biggest in the country and I took part this year with the samba band I drum with. I don’t actively seek out other Irish people, but usually will stop someone if I hear an Irish accent to say hi. Once or twice a year I’ll go to the Claddagh bar with my husband, a former high school hockey player, to watch the hurling finals or to see Dublin crush Tyrone in football one more time.

The jobs I’m doing now I’m doing because there is learning opportunity for me and in a sense I feel like I’m still serving an apprenticeship, even after living in Pittsburgh for close to seven years. The horror stories of student debt in the US put me off going back to college to study ecology here, and that is why I’ve chosen the slower route of figuring out the nuts and bolts of the environmental sector and familiarising myself with the totally different cast of animal and plant life in Pennsylvania by learning whilst working. I think it’s a tactic that’s paid off, although my husband may disagree! He’s an arborist-turned-baker and our combined salary is modest, to say the least.

My family and friends. I try to get home once a year, but it’s not the same, especially when your family members are experiencing health issues as was the case this year. I miss the sight of a bluebell wood in May, but now I love the trout lilies, trilliums and bloodroots that come with the Appalachian territory.