‘The emotion is incredible’: being in a St Patrick’s parade marching band 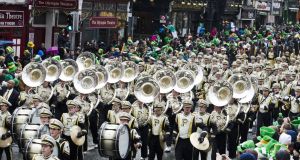 The Purdue “All American” Marching Band from Indiana during their first visit to Ireland. The band, featuring 346 performers and world’s biggest drum, returns this year to march in the St Patrick’s Day parade for the second time. Photograph: Adrian Sadlier

In 1992, the Marching Illini band from the University of Illinois became the very first American college band to cross the Atlantic to participate in the Dublin St Patrick’s Day parade. Since then, hundreds of others from all across the United States have made the same journey to march down O’Connell Street on March 17th, in one of the most famous parades in the world.

The Marching Illini are back in Dublin for the eighth time this year. Measuring 106 metres in length, their group of 310 performers – including five drum majors, twirlers, guards and “Illnettes” – will lead the parade behind the grand marshal, Game of Thrones star Liam Cunningham, and the Lord Mayor of Dublin Mícheál MacDonncha.

They are one of just 13 marching bands performing in the parade this year, nine of which have travelled from America, and one from Australia. More than 2,000 band members in total will march along the 3km route, sending their music reverberating through the city streets.

Even bigger this year is the Purdue “All American” Marching Band from Indiana, with 346 performers – and the biggest drum in the world – coming to Dublin for the second time. Along with their parents, alumni and friends, the Purdue group numbers more than 700.

Bringing such huge groups to Dublin at one of the busiest weekends of the year for tourism is a huge logistical challenge, requiring the help of tour operators in the US and in Ireland. Big bands often have to charter their own flights, and hire a fleet of coaches to bring them around. Most stay for at least five days, to sightsee and perform elsewhere around the country.

Despite the expense, the St Patrick’s Day parade in Dublin is one of the hottest international gigs for American college bands, and competition for a place is fierce. The application process takes up to two years, with a team of musical judges assessing applications from dozens of bands each year.

“Any of the bands who have been here will tell you about the atmosphere on the streets and the privilege of playing in the home of such a big festival which has taken over the world,” says Edelle Moss, marketing and development director of the St Patrick’s Festival.

“It is a unique mix from a parade point of view; they get to be amongst really strong creative pieces, which they wouldn’t get to do in other band parades. The atmosphere on the streets, and the warm welcome that they get in the city, isn’t replicated anywhere else.”

On the eve of the parade, the Lord Mayor of Dublin welcomes all the band directors at a reception at the Mansion House, where they are formally welcomed to the city, and brought through the logistical arrangements for the following day. After the parade finishes, another ceremony is held to award prizes for the best bands, and present participation certificates to all performers.

“For the musicians who have Irish ancestry, they walk down O’Connell Street with tears in their eyes. They might have only set foot on Irish soil a few times in their lives, if at all, so the emotion for them is incredible.”

Retired police officer Thomas Cody, who manages the Bagpipes and Drums of the Emerald Society of the Chicago Police Department, says leading his band down O’Connell Street in 2015 was one of the greatest honours of his life.

“I don’t remember walking down O’Connell Street because I don’t think I was on the ground at all, I was about four feet above I was so proud,” he says.

For those with Irish family connections like Cody, the experience has a particular emotional resonance. His father was from Tipperary, and mother from Mayo. They met at a dancehall in Chicago in the 1920s.

“My parents would have been about two feet higher than I was. I wish they could have been there to see it, they would have been very proud because they were the ones who passed on their Irish heritage to me. I won’t ever forget where I came from.”

The 47 band members were joined by wives, girlfriends and friends to number 123 altogether. They took a 12-day tour around Ireland after St Patrick’s Day, performing in three parades and other concerts, and visiting the Cliffs of Moher, Bunratty Castle, and Cork and Limerick cities. One couple got married on the trip, and another engaged.

It was an expensive trip – shipping alone of the band’s uniforms, flags, drums and other equipment cost $15,000 (€12,000), but Cody says they “will do it all over again for 2020” when they have secured another place in the Dublin parade.

“Three years later, the band members still talk about the great time they had in Ireland.”

2,000: Number of band members from Ireland, US and Australia.

155 metres: Length of the longest pageant, by Buí Bolg featuring 140 performers ranging in age from 16 to 60.