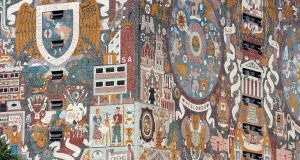 Juan O’Gorman is a name that sounds immediately intriguing to the Irish ear, even if the listener has never heard of the modernist architect and muralist who gave Mexico City some of its most intriguing buildings. It’s a somewhat incongruous combination of Spanish and Irish sounds, but it creates a sense of romance and drama. Juan O’Gorman’s life doesn’t disappoint.

Juan O’Gorman was born in 1905 in Mexico City to an Irish father Cecil Crawford O’Gorman, and Cecil’s partner (and distant cousin) Encarnación O’Gorman. Juan O’Gorman’s family had long divided their time between Mexico, Ireland, and England, and his father Cecil was a noted painter. His great grandfather had been the first British Consul to Mexico City in 1820.

Despite a cultured and privileged background, Juan O’Gorman’s path was to be a relatively unsteady one, full of reversals of fortune and surprising changes of direction.

Taking the artistic lead from his father, he decided to study architecture at the Academy of San Carlos in the National Autonomous University, where he discovered the work of Corbusier. By 1929 at the age of 24, he had built his first house in the well-heeled and staunchly traditional neighbourhood of San Ángel, for his father. The house was brutally minimalist, in a style that he would champion for many years - using slab concrete, exposed wiring, and large window apertures divided by smaller panes. Popular myth says the local response was that O’Gorman’s architecture degree should be revoked. The house is still standing and now available as an Airbnb rental.

Despite local comment, O’Gorman’s work was popular with his circle of influential friends, including Diego Rivera and Frida Kahlo, for whom he built two individual functionalist houses linked by a bridge. These houses are now open to the public and have been preserved as they would have been when the couple lived there in the 1930s.

It was during this decade that a wider interest in O’Gorman’s architectural style was piqued and between 1932 and 1934, he worked for the Department of Education in Mexico, building 26 elementary schools under the principles the “engineer-architect” school of thought - maximising functionality and minimising cost.

However, despite the success of these schools, O’Gorman became dissatisfied with functionalism and began to move away from it towards organic architecture. He even denounced his previous association with the style, saying it had simply allowed the wealthy to create further profits by cutting building costs.

He began to paint murals influenced by the surrealist-modernist style of Diego Rivera. The most famous of these, Historia de Michoacán (1941-42), deals with both pre-Columbian history and the colonisation of Mexico. Many of his murals were overtly socialist and anti-fascist, which led to his murals in Mexico City’s first airport being removed in 1939 just two years after they had been completed.

At the end of the 1940s, Juan returned to architecture, building a house around a natural cave formation in Pedregal, covering it in mosaics which mixed Christian and Aztec symbolism - this was part of his and Diego Rivera’s project to create a vernacular Mexican architecture. Juan’s reputation as an eccentric character, paired with the fantastical nature of the house, brought busloads of tourists to his door.

His most lasting creation, however, was the Library of the National Autonomous University of Mexico, which he designed and built in the early 1950s and which has been given UNESCO World Heritage status. The surface is mosaicked with millions of stones chosen by O’Gorman for their individual colours, and sourced from various regions of Mexico.

Despite his success, the Library soon began to look like the swansong of a man whose contrary nature made him prone to more regular outbursts. In 1969, he sold his house to an architect who destroyed the mosaics and then demolished the house. Distancing himself from friends and family, his relationship with his second wife Helen broke down.

In 1982, after being diagnosed with a fatal heart condition, he took his own life. But his imposing, politically challenging and exuberant work constitutes an important step in the establishment of a vernacular Mexican style of art and architecture, one that synthesises the uncomfortable truths of its history with its vibrant contemporary culture.

This Extraordinary Emigrants article was written by Jessica Traynor, deputy museum director of EPIC The Irish Emigration Museum (epicchq.com) in Dublin’s Docklands, an interactive museum that tells the story of how the Irish shaped and influenced the world.