Christmas dinner in Ireland: ‘The first time at my mother-in-law’s, I gagged’ 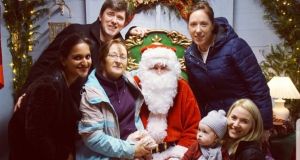 Khushbu Shah (front left) with her husband and his family visiting Santa in Cork.

The first time I sat down for Christmas dinner at my Irish mother-in-law’s home in Cork, I gagged. After a week of boiled meat, mushy cauliflower, and even mushier peas, my Indian-American spice-loving body had an unintentional reaction to the salt-only spiced food in front of me. I was desperate for a jalapeno-laden pepperoni pizza.

My husband swears no one saw me except him because he was seated across from me, but I know better because my mother-in-law, Lucy, sent me to the English Market the next day and let me run wild among the garlic and lentils to bring home for dinner that night.

Over the years I’ve snuck Butter Chicken and guacamole to the Corkonian dining table, trying to get the family to branch out from a plate of “meat and two veg” during our annual visits. Somehow, though, in between these vacations, the marrowfat peas I nearly threw up have become a staple at my own Christmas dinner for the Christmases we can’t make it to Ireland.

Batchelors - that is the only brand worth buying, by the way - marrowfat peas are dry and a strangely expensive $3 (€2.65) bag for what will end up on your best plates as a pile of mush. Following the regular toils of Irish cooking, the instructions are relatively simple: empty the bag of dried peas into a large bowl, pour boiling water over the lot, and dissolve the soaking tablets into the steaming water overnight. The next day, rinse, softly boil, and in 20 minutes, with a little bit of salt, the mushy green peas are ready. It’s not a gourmet dish I’ve slaved over for hours, but it’s comfort food now.

The addition of Irish food to my own cooking has been a gradual one, nearly a decade long journey acceptance over the countless trips made to the overcast isle for christenings, holidays, and milestone birthdays. Fries with lo mein? You must be joking, I said when the Chinese takeout was brought home after a particularly wild night out with my sisters-in-law. Now, I always ask for a side of “chips” with my Chinese food.

When black pudding, a blood sausage, was brought over as part of a hangover stopping breakfast, I stuck to the bacon, but I recently had Irish sausages during a layover in Amsterdam on our way to Cork because I was so excited to see them on a menu. I used to think peas were a waste of a perfectly good spot for vegetables on a plate. Now, they’re a staple in my cupboard. Kerrygold butter, though, has been in my fridge since 2011. Good butter is good butter.

I couldn’t figure out why I began craving the food my body had rejected so quickly that first Christmas, until I read a 2015 Virginia Commonwealth University study called “Scent-evoked nostalgia”, which came to the conclusion that “scents can contribute to a powerful evocation of nostalgia”. Another study published in Appetite theorised that comfort foods - not necessarily only ice cream and potato chips - “serve as a reminder of social relationships”, hypothesising that we humans eat foods that make us feel less alone, and remind us of our friends and family.

The longer we went without a visit to Cork, the more I wanted mushy peas with my steak. The days I couldn’t get in a conversation with a toothy blonde toddler quoting Peppa Pig to me, I would saute ground beef for a a shepherd’s pie.

We make it to Ireland about once a year. In between, there are weekly video calls on Viber and FaceTime, especially with the niece and nephew who want to show us their dinosaurs and talk about Paw Patrol. At first I had to ask for Irish slang translations, but I can hang and have good craic like the rest of them now. I crave windy, hilly walks down to town before making it back for a hot cup of tea and cake. Regularly, we get shipments of Barry’s tea and Cadbury chocolates with the birthday and Christmas presents, but it’s not the same as landing in Cork after that seven-hour plane ride across the Atlantic.

Ireland has become another home, a place where my family lives. Last Christmas Eve, when we couldn’t make it back because of work, I pulled up a video call with Lucy to have her walk me through the exact level of mushiness my peas needed to be to make my husband feel less homesick. After I victoriously scrubbed and roasted my potatoes and put the turkey in the oven, I called her back to show her the lump of green sitting on my stove.

“A little too mushy,” she said leaning into her phone. “You overcooked them, but don’t worry. I’ll show you when you come home next time.”

Khushbu Shah is a freelance journalist based in Atlanta. Her work has appeared in The Guardian, CNN, Teen Vogue and the Washington Post. She tweets @KhushbuOShea