What Dublin can learn from San Francisco’s mistakes

Both have economies fuelled by tax-incentivised tech-sectors, and severe housing crises 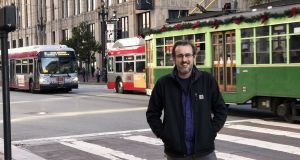 Neil Ginty is an architect from Dublin living in San Francisco.

The 49 square-miles (127 sq km) of San Francisco would fit rather snuggly inside the M50 in Dublin, but this is not the least of the two cities’ many commonalities (the weather obviously not being one). Both are surrounded by stunning natural beauty, both have economies fuelled by tax-incentivised tech-sectors, and both are suffering severe housing crises.

San Francisco is well known for its high cost of living, driven by the vast wealth that came with successive tech-sector booms. It is less well known, outside of America at least, for its large homeless population. I’ve lived here more than a year and I’m still struck daily by the stark inequality; from the recently completed Salesforce tower now dominating the skyline, to the sorry sight of tent villages under the freeways evocative of refugee camps in far less wealthy nations.

I see that contrast and hear long-time locals, while acknowledging some changes have been good, clearly lamenting a place that has been lost to them. The fondness with which they speak rings familiar to how I remember my college and early professional years spent in Dublin up to 2015.

I hear continuing reports from home of the housing issues, the steady creep of gentrification, and David Kitt’s recent bemoaning of “Dublin’s heart and soul being ripped out and sold to the highest bidder” as he left town. I find myself wary of the influence of a tech-sector that has fuelled California’s most recent gold rush, and wonder what those same companies’ impact might be an evolving Dublin.

I work in an architects’ office in the so-called South-of-Market district, very close to Mid-Market to which Twitter, Uber, Dolby and others were cajoled with tax incentives. South-of-Market has long been a light-industrial area but has also been a refuge for the city’s homeless population.

I spoke with my work friend, Karen Kwong, recently about what the city used to be and how it became the place it is now. She has lived in San Francisco for more than 40 years, and has witnessed the changes firsthand.

She says there was once a few very nice areas and some areas people just didn’t go to, but for the most part, it felt like everyone was at roughly the same level financially, and could realistically expect to afford a home.

She recalls a series of migrations to San Francisco. The Dot-Com Boom of 1999-2000 was followed by a brief lull, but then came the tax incentives that retained Twitter in the city, and lured other tech companies back from Silicon Valley.

With the new tech money came competition for space. “As the older people began to sell up, younger locals were not able to compete with the new money and had to either rent, move to the East Bay or just leave altogether,” she says.

Places which once seemed far off like Redwood City or Walnut Creek, equivalent to where Navan or Drogheda are to Dublin, are now very much part of the daily commute for thousands of people.

Grinding traffic is a familiar complaint, but there are worse problems. Homelessness has long been an issue in San Francisco and can be quite shocking for first-time visitors. The demand for land, however, has pushed them from the once unseen fringes to almost every part of the city. From about 2005 onward, tent villages started to become fixtures on the streets and under the freeway interchanges.

“You never used to see homeless people in the Sunset district,” Karen tells me. “They were always in the Tenderloin and South-of-Market, but as those areas gentrified, they expanded to other places.”

Cultural diversity is one of the real joys of San Francisco, but Karen explains to me how generational diversity has declined over time. Many families have left as the city largely became a place for wealthier young tech professionals.

“Working and walking around different neighbourhoods these past 20-plus years, I see fewer and fewer children than I used to. Some of my friends are teachers and said they notice the average classroom size has shrunk from 30-35 during our time, to around 20-25 now.”

Gentrification is a fact of life for most big cities, and is not necessarily a bad thing. Mid-Market here, much like the Dublin Docklands, was a run-down area much in need of rejuvenation. As the tech-giants continue to grow in Dublin and with the potential influx of some high-paying Brexit jobs, I wonder if the trappings of wealth that so ill-affected San Francisco might do something similar there.

Obviously, other variables are at play in San Francisco. It established itself amongst the greed of the Gold Rush and that history defines it today as much as it did in 1849. It can nonetheless serve to forewarn what comes with rapid growth, and is a place whose mistakes Dublin might do well to learn from.

Neil Ginty is an architect.