How treasured objects help us create a home away from home 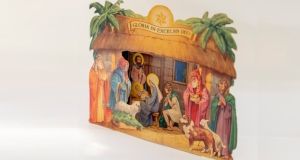 “In 1941, I got a cardboard crib for not missing a day of school for a year. I brought it with me when I emigrated, and I still have it now.”

As Christmas approaches our thoughts usually turn toward home. Some of us are planning that journey back to Ireland to reunite with family, others romantic escapes with a loved one, while more still are hoping to settle into a new home ahead of the holiday season.

Yet, moving can be a turbulent time. It compels us to bundle our lives into boxes, bags and cases. We discard the things we no longer need or cherish, and hold onto what we deem essential; the functional and the sentimental. We also endeavour to retain and preserve links to our past selves and our past experiences; those aspects of our identity that make us who we are, or who we want to be.

For some of us, moving to a new home can mean moving to a new country or even a new continent. It can mean engaging with a new culture, a new language, a new community, a new currency or a new history.

Throughout 2018 I’ve had the pleasure, in collaboration with the Europeana network, of recording the stories of Ireland’s migrants and the objects they feel best represent their own experiences of migration. Return emigrants, the Irish diaspora and members of several new Irish communities have all participated in our series of Story Collecting weekends.

Many of these treasured objects have become symbols of home.

Food and the material culture around it plays a role. Enrico and Francesco moved to Ireland in 2015 from Sardinia, via Canada. For them a simple potato masher encapsulates their Italian heritage, their emigration journey and their multicultural lifestyle:

“We both love cooking. When we discovered we could both be in the kitchen at the same time, we realised we could live together. We have brought Francesca’s grandmother’s potato masher, which we use to make gnocchi. We used it to make mashed potatoes first in Canada hosting Thanksgiving for all our immigrant friends, and then in Ireland hosting Thanksgiving for our American friends.”

Sometimes even unwanted goods become dear to us. Orla left Ireland to work in England in the mid 1970s, and her casserole dishes ended up becoming an intrinsic part of her family’s daily life:

“My objects are two Pyrex dishes. We had our wedding in Ireland and I asked everyone to buy us sheets and blankets or give us cash as we were returning to London soon after. We only wanted to get things that we absolutely needed, and nothing heavy because we had to travel back to England. Instead I got far too many Pyrex dishes and I had to carry these heavy things back home with me…These two are the only surviving ones, my family still use them every day when we have dinner. They may not have been what I wanted at the time, but I hung on to them for all these years, so I suppose they have some sentimental value now.”

Festive decorations can also foster a sense of home. One Irish woman who moved to England in 1954 to work as a nurse in the NHS has had the same Christmas crib for the last 77 years:

“In 1941, I got a cardboard crib for not missing a day of school for a year. I brought it with me when I emigrated, and I still have it now.”

For one Brazilian woman, home isn’t home without her beloved dog Oliver. He’s travelled with her to Ireland via Portugal, and made it to Ireland despite some challenges:

“When I moved to Portugal, I brought him with me - he was my whole world. Ireland is one of the three islands that never had rabies, it was difficult to bring Oliver [HERE]. I had to get him a Portuguese pet passport in order to bring him to Ireland. We’ve been here for six years now, and Oliver has adjusted very well to the Irish climate.”

Perhaps the most fitting object of all was a set of defunct house keys brought in by an American student living in Ireland. For her, they’re a reminder of home yet simultaneously a symbol of the distance between her current and former lives, and the distinctive appeal both still hold:

“I brought in my house keys from back home. The key-chain was a gift from my neighbour. I keep them just to look at as my family changed the locks after I left. Home will always be there, and you’ll always see things that will remind you of it. The feeling you get when you go home (I only go once a year) when I look at these objects I think of the excitement of coming home. It was the monotony that got me to leave, but it’s also still the thing that I miss the most.”

This article was written by Nathan Mannion, senior curator of EPIC The Irish Emigration Museum (epicchq.com) in Dublin’s Docklands, an interactive museum that tells the story of how the Irish shaped and influenced the world.