‘Come From Away’ reminds us that as humans, we are all connected 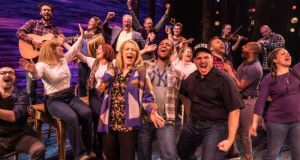 Come from Away: The Broadway musical makes its European debut at the Abbey Theatre.

On September 11th, 2001, I was driving through Dublin with my mother when I got a phone call from my father telling me to turn on the radio. By the time we reached a television 20 minutes later, the first tower of the World Trade Center was collapsing. There wasn’t a person near me who wasn’t glued to the TV, horrified, in abject shock, at what was unfolding before our eyes.

A national day of mourning was held in Ireland. I walked through the city with friends to lay flowers at the American Embassy in Ballsbridge. I still hadn’t made contact with certain friends in New York or knew of their whereabouts. Stories were emerging, by the hour it felt, of someone who knew someone who was in the towers, by then in piles of smoldering molten steel and death in a space now known as Ground Zero.

To say that Ireland was deeply connected to New York, to the US, that day is an understatement. It went beyond the “special friendship” touted by politicians. There was a genuine heartache, a felt heartbreak, for the pain and suffering evolving across the Atlantic.

At the time, I was living in Ireland. I had no idea that New York was would become my home for 10 years, that my future husband evacuated blocks from the World Trade Center and felt the plumes of smoke bellowing from the ruins fill up his lungs.

A new kind of bond was cemented in those days following September 11th between Ireland and the US, one that lingers to this day when Irish tourists visit the 9/11 Memorial built in the holes where two giant skyscrapers once soared.

In the chaos that ensued after the attacks, flights were grounded across US airspace. And in one particularly strange set of circumstances, many flights found themselves on the ground in a tiny town called Gander on the island of Newfoundland. Thousands of passengers, from all over the world, were welcomed into a tiny community ill-equipped to take care of so many in such a crisis. But they did. And a beautiful story of the triumph of the human spirit emerged.

This story was turned into a musical called Come From Away which has just opened at the Abbey Theatre in Dublin. Having very recently repatriated myself home to Ireland from New York, I was curious and keen to see this unique story. It’s not often you get a glimpse of a strange place like Newfoundland on an Irish stage, let alone our National Theatre. And it’s not often that theatre makers get something so right it leaves you gasping for more.

The production is magnificent, the music is stunning, the performances are stellar. But what got me in the solar plexus was the feeling, the warmth of the show. It took one of the most painful, horrific events in modern memory and found beauty and humanity within. The arrival of thousands of people of many nationalities and religions stranded in a homogenous place, heavy with Irish roots, has given rise to one of the most joyful and uplifting pieces of art I’ve ever seen.

On a stage too often in the past weighted down with melancholy and the darkness of this country’s collective trauma, Come From Away is a breath of fresh air that reminds us that as humans, we are all connected. I returned from the US more than four months ago to a new Ireland. I see faces and nationalities everywhere I wouldn’t have seen many of before I left. It brings me great joy to see Ireland evolving into a country that’s weaving diversity into the fabric of our society.

When you put art that represents all of humanity at the centre of society, you change the culture. When you represent experiences other than what has always been known, you shift perspectives and expectations. In effect, you change your corner of the world.

Sitting in my national theatre this past week, I got a sense that a crack had opened up. For too long, I felt stifled by the homogeny of programmed art in Irish theatre. It’s not good for us. It’s not good for a place. Society is changing at break-neck speed and the art that reflects that life needs to keep up.

In 2015, we voted for marriage equality. In 2018, we voted to repeal the Eighth Amendment. These are, without doubt, massive steps. The work ahead of us is big. We have demonstrated that a small country on the fringe of Europe can make seismic changes. Imagine what could happen if we did the same with the art we present? Imagine if the creators and the imaginators of this country took that same kind of bold step that centres great art that represents all of us.

Connection creates compassion creates change. Out of great horror, something beautiful can be born that connects us to the pain and evokes compassion so that we may change the world we live in. A musical about people stranded on an island after 9/11 is a direct line into Irish hearts. We are connected to that moment. We have compassion for it. And then, when we see how art can turn that into something meaningful, we know that change is the greatest gift of all.

Lisa Tierney-Keogh is Associate Playwright at the Abbey Theatre and co-host of the Irish Stand podcast. She tweets @lisatk. Come From Away runs at the Abbey  until January 19th.