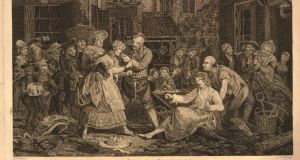 The Female Bruisers by John Collet in 1770. Photograph: British Museum

London of the 18th century was an increasingly cosmopolitan city. Despite the rumblings of the wars of Spanish and Austrian succession in the first half of the century, the Puritan era had ended and the entertainments of previous generations were returning to the city in the form of theatre, opera, and the more violent pastimes such as bear-baiting and prizefighting.

Irishmen and women were more visible in the city, coming as migrant workers to bring in the harvests or escaping intermittent famines such as the devastating famine of 1740-41, during which an estimated 13-20 per cent of Ireland’s population starved. The Penal Laws had devastated the Catholic middle classes contributing to social conditions, which would inspire despairing works of satire such as Jonathan Swift’s A Modest Proposal, opening with the memorable lines: “It is a melancholy object to those, who walk through this great town, or travel in the country, when they see the streets, the roads and cabin doors crowded with beggars of the female sex, followed by three, four, or six children, all in rags, and importuning every passenger for an alms”.

These circumstances contributed to an influx of Irish people to cities like London. Anti-Catholic sentiment and suspicion became inflamed in the 1730s by rumours that English builders were being undercut by Irish workers. Tensions came to a head in 1736 in the Spitalfields riots, a series of pogrom-like attacks on Irish people and establishments in the most impoverished parts of the city. Crowds of more than 2,000 attacked Irish pubs, and a young man was shot dead in Brick Lane. A pamphlet of the time captures the anti-Irish sentiment: “It is shocking to behold the Cruelty or Impudence of some People, who, even in a strange Country, by the Natives thereof they get their Living; yet these ungrateful wretches are ever belching out their most dreadful oaths, Curses and Imprecations against those very People by whom they have Subsistence”.

However, these tensions were not only playing out on the streets of London, they were being dramatised on the stage in the trope of the stage Irishman, and also fought over in boxing booths for paying customers. English manliness was being defined in opposition to Irish braggadocio in venues such as James Figg’s Amphitheatre, opened in 1719. In the febrile atmosphere of the day, Figg recognised the appeal of Englishmen pitted against Irishmen, and a number of matches were fought. In 1730, Figg paired up with one-time opponent Edward Sutton to see off two Irishmen, William Holmes and Felix MacGuire, who styled themselves “the first two and most profound Swordsmen in the Kingdom of Ireland”. A report in the Ipswich Journal said that “Yesterday the invincible Mr James Figg fought at his Amphitheatre Mr Holmes, an Irishman, who keeps an Inn at Yaul near Waterford in Ireland, and came into England on purpose to fight this English Champion.’ Holmes suffered a serious wound to wrist, forcing him to concede victory to Figg.

Fighting bouts of the day were extremely different to contemporary boxing matches. They often including rounds of sword fighting and wrestling, and with methods such as kicking and eye-gouging allowed. Another surprising factor is the involvement of women in the sport, with matches between women carried out on largely the same terms as those between men, and with similar dramatic “call outs” printed in the papers of the day. Irishwomen were another regular fixture at Figg’s amphitheatre in the 1720s and 1730s, with the competition for national mastery playing out on this field too. In 1726, Irish combatants Robert Baker and Mary Welch issued a challenge to James and Elizabeth Stokes, a couple who were a regular fixture at Figg’s amphitheatre, inviting “Stokes and his bold Amazonian virago to meet us on the stage”. Welch added: “Whereas I, Mary Welch, from the Kingdom of Ireland, being taught, and knowing the noble science of defense, and thought to be the only female of this kind in Europe, understanding there is one in this Kingdom, who has exercised on the public stage several times, which is Missus Stokes, who is stilled the famous Championess of England; I do hereby invite her to meet me, and exercise the usual weapons practiced on the stage, at her own amphitheatre, doubting not, but to let her and the worthy spectators see, that my judgment and courage is beyond hers”.

Guest’s Journal fanned the flames of excitement: “We hear that the gentlemen of Ireland have been long picking out an Hibernian heroine to match Mrs Stokes, the bold and famous city championess. There is now one arrived in London, who by her make and stature seems likely enough to eat her up. However, Mrs Stokes being true English blood (and remembering some of the late reflections that were cast upon her husband by some of the country folk) is resolved to see out “vi et armis” or “with force and arms”. This being likely to prove a notable and diverting entertainment, it is not at all doubted but that there will be abundance of gentlemen crowding to Mr Figg’s ampitheatre to see this uncommon performance”. There is no account of who won.

In 1733, Felix MacGuire made a return to the amphitheatre with his wife Letitia in tow, and again the question of Irish or English dominance was settled in the ring. However, the heyday of Stokes’s career in the 1720s and 1730s coincided with the heyday of women’s involvement in the sport, and although women continued to take part in boxing matches as the sport became formalised, it was never with the frequency or visibility of these fights.

These performative brawls between Irish and English fighters contributed, in their own strange way, to the formation of English and Irish identity as distinct, and often, opposing.

This Extraordinary Emigrants article was written by Jessica Traynor, deputy museum director of EPIC The Irish Emigration Museum in Dublin’s Docklands, an interactive museum that tells the story of how the Irish shaped and influenced the world.