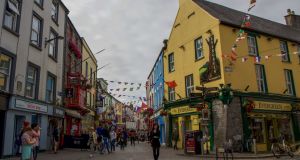 ‘The idea of returning to Galway and Ireland that had a value on their local butcher and retailer drove me to move home.’Photograph: iStock

This time two years ago, all I wanted was that it would be my last Christmas away from Galway. I dreamed of the smell of mulled wine from Neachtains’ pub, the mince pies in Griffin’s Bakery, and the buzz and chats in the market at St Nicholas’ Church.

Every Christmas since I moved away in 2013 I had a crippling fear from November, which struck me every so often, that I could be stuck in England for Christmas and my family would have to do Christmas without me but mostly that I wouldn’t get to be at home and an overwhelming feeling of what that might be like. The last time I travelled home for Christmas, I made a decision that would be the final time as the fear seemed to get worse every year as if I were becoming more and more distant from home the longer I was away and surprisingly enough, it was.

I was walking over London Bridge in October 2017 on the way to meet my friends for brunch and I had planned my time to perfection in that I would arrive there at exactly 12pm. But once I got out of the station I was met by hoards our tourists milling around, dwelling on where they were going. In trying to get past these families I had this impulse to shout at them: “Move! I have somewhere to get to”. In that split second when that impulse came into my mind I caught myself and thought “what the hell are you doing, it’s a Saturday and these people are on holidays”- it was then I knew I had to get out, the rat race attitude was starting to engulf me and I needed to escape.

From that point I really began to think about why I was in London and why I wanted to move back to Galway. This insatiable urge to return was in me from when I left and I needed to listen to it. I started to realise how much effort I had to put into buying meat, coffee, vegetables, bread and general day to day purchases from independent businesses, which was something I’ve always be passionate about. Doing this in Galway always seemed so much easier, when it was always on your doorstep and there were so many independent butchers or retailers in the city and county. The frightening thing I found about England was that it wasn’t only the city and suburbs that had pizza and coffee chain stores on every corner, it was the same in towns and independent businesses had been wiped out. The idea of returning to Galway and Ireland that had a value on their local butcher and retailer drove me to move home, because capitalism in the UK was smothering me. Adding to this were the results of the Brexit vote, which only seemed to make it worse, ironically.

The day I arrived into Galway train station I was met by a Starbucks. I walked onto Eyre Square to go to a meeting and was met by another. I walked down Shop Street only to realise that so many of our beautiful historic buildings in the city had been taken over by chain stores and I felt deflated by the time I’d gotten to the bottom of the road.

Griffins bakery, which I had worked in during university had been open for more than 150 years in Galway city centre, closed this year as did the local fish shop Deacy’s across the road - both of which I thought would be there forever. But without the support of the community, what did we think would happen. It really came as a shock and a blow, but also met with so many “I kept meaning to buy my bread there, haven’t been there in years”.

The closures of these local longstanding Galway businesses made me re-evaluate my attitude to Christmas this year and why I came back to Ireland in the first place. It was for the culture, the people and the businesses that make this island so special and why people flock from around the world to be here. Whether this is your local pub, your fishmonger or a jeweller, supporting local is what makes this country and our culture so strong and unique. It’s what made me dream and dwell of returning to Ireland for four years.