My London history students’ knowledge of Ireland is, at times, shocking 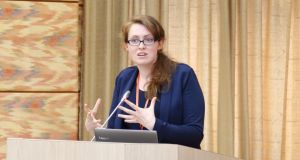 Joan Redmond: ‘I fear for British academia and its further provincialisation with Brexit’

I am an Irish academic working in the UK, in the fields of Irish and British history. My perspectives on Brexit, Britain and Ireland are centred around universities and education, but I think many of my experiences would be similar to other Irish people in the UK.

I moved to the UK in 2011 to pursue a Master’s degree in history at the University of Cambridge. After completing it, I stayed on there to do a PhD in history. I had the option of returning to Ireland to study for the PhD, which was tempting.

For several reasons, I chose Cambridge. One was my supervisor, who was an expert in the field and someone I really got along with. I wanted to stay and work with him, as he was retiring soon after that and there wouldn’t have been another opportunity.

The third reason was more intellectual: the challenge of studying Irish history in Britain. While Irish history has always had a presence in Cambridge, it is something of a declining force – for the worse, as we have seen with the current standard of debate and knowledge around Irish and British history in Brexit discussion.

But studying 17th-century Ireland at a UK university challenges you to view the topic from different angles than if I had pursued the topic at an Irish university: different questions emerge, and the questions of peers and other scholars also cause you to think differently.

One of the outcomes, ironically, was that it pushed me to think about Ireland’s role in Europe, and how Ireland viewed itself relative to England and other European countries, such as Spain and France.

I am now a lecturer at King’s College London, teaching early modern British and Irish history. I try to impress on my students how important Ireland is in the wider “British” story, and not just as an occasional or bit-part player: entire systems of English and “British” identity – empire and its associated issues, nationalism, religion – have a distinct green tinge.

Their level of knowledge is, at times, shocking: they learn little to nothing of a close neighbour’s history at school, and not much more of “their” history.

It can be a struggle: students can sometimes be dismissive of why they “have” to learn “this Irish stuff”, and British and European history as a whole is sometimes seen as provincial and old-fashioned – with the current emphasis on both global history, and decolonising the curriculum.

I still think these questions and debates are relevant to who we are now, and it will be an important element in thinking about both education and history in the future.

I love my job, and my colleagues: they are what keeps me going amid the Brexit insanity. It is I think an example of a British success story: an academic department with many nationalities and perspectives, and the same among our students.

It is a lively and stimulating place to work, but I sometimes wonder what my experience would be if I worked in a heavily British office or industry, instead of one characterised by diversity.

I do not think the majority of British people are racist or xenophobic. I do think, however, that my working life may not be as rich as it is were it not for the particular environment that academia cultivates.

I have enjoyed living in the UK for the most part. The strange thing about living in Cambridge, and then later working at a major London university, is that I sometimes wonder if I have truly lived in “Britain”: both are such multicultural environments, progressive, intellectual, and so forth, and I feel that large parts of Britain are not like that, or are resistant to embracing it.

Perhaps living in this bubble was why Brexit was such a shock: Cambridge, as well as London, was one of the most heavily pro-Remain areas of the UK. When listening to and watching people in other parts of the UK outline their reasons for leaving, it is unfathomable at times, and self-destructive.

Coming from Ireland, where even though people criticise the EU, it is still a majority pro-EU country, the differences in public discourse and debate, levels of understanding, and attitudes can be astounding, and worrying.

I do fear for the future in some ways. I am concerned that Irish citizens appear to be becoming a kind of unicorn – European, while still accorded important rights in Britain – and that that situation surely cannot last.

I am afraid for my Italian husband, whom I met in Cambridge and who now works for the University of Cambridge. He is highly educated, intelligent, and a real Anglophile in a way I am not, and think I can never be. He is the kind of immigrant the UK should be welcoming with open arms, teaching its sons and daughters about a shared European past that includes both cooperation and conflict, that is not all glorious, but still important.

I worry about what will happen to him, due to the incompetence and malice of the “settled status” system, which carries the implication of “unsettled” status in the future, and the potential for revocation at any time.

I am gloomy but not completely pessimistic about the future. I think of Britain as “where I live”, but not necessarily home. I am not fully emotionally invested in this place: in the current climate, it does not allow me to.

I have no plans at the moment to leave, as the academic environment and jobs market is so atrocious that moving is difficult, and I would be afraid about my chances of getting another job.

I fear for British academia and its further provincialisation with Brexit, but I hope it will be resilient and continue to have an important role in the world.