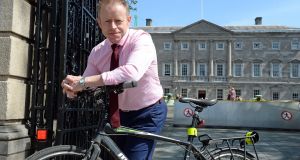 Fine Gael TD Ciarán Cannon has been appointed Minister of State for Diaspora and International Development.

He succeeds Joe McHugh, who was given the role of Chief Whip and Minister of State for Gaeltacht affairs by Taoiseach Leo Varadkar last week.

Mr Cannon is the third person in three years to hold a ministerial position representing the Irish abroad, after Jimmy Deenihan was appointed Ireland’s first Minister of State for Diaspora in 2014.

A former leader of the Progressive Democrats, Cannon joined Fine Gael in 2009 after the PDs dissolved. He was elected to the Dáil for Galway East after time as a councillor and Senator in 2011.

Cannon, whose constituency office is in Loughrea, was appointed Minister of State for Training and Skills when he was elected but found himself returned to the backbenches in the 2014 reshuffle.

He is a father of one and lives in Kiltullagh, Athenry, where he was born. Every two years he cycles 600 miles for the Irish Pilgrimage Trust, a charity for children and young people with disabilities.

Formerly one of Galway’s “people of the year” (in 2002), Cannon has been the chairman of the Carrabane Community Council and scout leader for the local scout unit.

Irish abroad: What issues should Ciarán Cannon prioritise in his new role? Send us an email with your thoughts to abroad@irishtimes.com, with a few lines about you and where you are living. A selection may be published in print. Thank you.