AJ MacGinty up against familiar faces in green 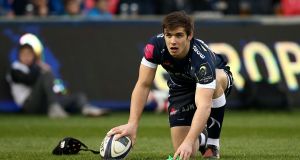 AJ MacGinty: the Sale Sharks outhalf will pull the strings for the US Eagles against Ireland on Saturday. Photograph: Jan Kruger/Getty Images

Nearing the interview’s natural conclusion, Alan MacGinty Jnr starts laughing to himself. The Houston story is too good to let it slip by undocumented.

The conversion veered around every juncture of this 27 year old’s sporting life; brief exposure of his skinny frame to Leinster underage squads, playing AIL for Blackrock, to dominance in New York’s amateur leagues, onto Life University and that magical single season as US Eagles quarterback at a World Cup before guiding Connacht out of Siberia.

Now we’re talking about June 2013 when a bare bones Ireland side squeezed out a 15-12 victory under a sweltering Texas sun. The entire stadium had been tail-gating so everyone was suitably lubricated, with edgy cops and security expecting an American Football crowd.

Joe Schmidt, the incoming Ireland coach, is amongst the players, having quietly slipped into the team environment 24 hours earlier.

MacGinty is not yet an American, not a professional rugby player either, but somehow he’s made his way onto the field.

At under-20s I played against all of these players and I never felt that I was out of my depth. It was just one of those things it just wasn’t the right time for me.

Heavyset stewards are closing in around him . . . Ian Madigan claims brotherhood but when US outhalf Toby L’Estrange simultaneously offers the same excuse MacGinty’s arm is “reefed” up his back and he’s marched into potentially disastrous waters.

“I stormed the field!”

As an Irish or US fan? “I don’t know. The guy I was rooming with in New York [L’Estrange] was playing 10 for the US and Madigan was 10 for Ireland.”

MacGinty and Madigan played together all the way up through school.

“They were chatting to each other so I hugged them both! The stewards came over and they said ‘Ah no, he’s our brother.’ Seemingly you can get arrested for that in America.”

He was escorted out past clueless Irish journalists.

An inglorious exit, but the crossover from J1 to F1 visa status remained intact as he returned to the Pig and Whistle in midtown Manhattan for his next shift behind the bar (Alan Snr wasn’t long bringing down the curtain on that career path).

A different narrative unravels at what should be an equally lubricated Red Bull Arena in Harrison, New Jersey Saturday night. Madigan is away on holidays before his move to Bristol (MacGinty can prepare his friend for life under Pat Lam) but other contemporaries will hound him just as much as Todd Clever’s US Eagles go hunting fresh Joey Carbery meat.

Regret does not linger. He wasn’t ready for the monkish existence that comes with professionalism when Leinster took the Ulster-bound John Cooney into the academy system ahead of him.

“At that stage John was eating weights. I won’t say he was a better player because he would love that but he was ready to go in. At under-20s I played against all of these players and I never felt that I was out of my depth. It was just one of those things it just wasn’t the right time for me.

Instead he “breezed” through accountancy exams before realising that life could not protect his sanity. New York City took him and through rugby kept hold of him for a time.

The chance to earn a living from this game only came about because men like former US Eagles coach Mike Tolkin saw him shoot the lights coupled with his parents liking the idea of continued education coinciding with rugby.

Rugby in America is campus life.

The Sale Sharks are now reaping the benefits. Nor does he regret Connacht’s inability to keep him, as they were locked into the ill-fated signing of Marnitz Boshoff.

“Everything about that place just brings back such good memories,” he says of Connacht’s Pro 12 winning campaign. “Everything about it was class. When we won and we got back to Galway we had a big night out together but then I was gone on the Monday afternoon, I had to get into camp up here. I didn’t even get proper goodbyes.

“I only seen a few of them after that. It will good to see them again, playing on opposite sides.”

It stands alone, almost like it was all a dream.

“Dave [Gannon], who is my cousin, I remember watching him playing for Connacht. They would pick up the odd win here and there but he loves the place.”

Gannon captained Ireland to the under-21 World Cup final in 2004 before a nomadic pro career saw him end up alongside his younger cousin at Life University, where he still coaches.

It’s Thursday and we are sitting pretty in a leafy suburb of New Jersey at the summer silent Drew University – the locals are unhappy about the army of Secret Service agents and wagging media invading the neighbouring township of Bedmister. Our friendly, and seemingly affluent Uber driver, reliably informs us that in 2002 President Donald Trump purchased the mansion from John DeLorean (think Back to the Future) to create his “northern estate” where he was able to watch the James Comey hearings in seclusion.

(Our Uber driver’s father also did business with Vincent ‘The Chin’ Gigante in Cuba before “Castro ran them all out in ’ 57”.).

Anyway, AJ MacGinty is proving he can spin a yarn with the best of them. All doused in truth, mind.

He has serious pedigree in this regard and as a rugby player.

MacGinty’s maternal grandfather was George Norton, who gathered 11 caps for Ireland and a Triple Crown in 1949 before travelling to New Zealand and Australia with Karl Mullen’s 1950 Lions.

On the other side was Tom MacGinty, the distinguished Irish Independent racing correspondent, having left The Irish Times in 1961 to succeed Micheal O’Hehir. Uncle Karl was Indo sports editor then golf corr while Alan senior, well, anyone anywhere near Leinster schools rugby these past 30 years will know all about the mathematics teacher.

Many a player – Brian O’Driscoll, Leo Cullen, Luke Fitzgerald – would have learned the game’s fundamentals under the current Blackrock College principal.

“Yeah, you come into the school in second year and he is the under-14s coach now. He gives them a bit of tough love.

“My problem was I was so small [86kgs or 13 and a half stone]. I remember when I first went from scrumhalf to outhalf it was against Clontarf under-20s. Madigan was on the bench and he came on in the 60th minute and closed out the game.

“I remember Dad saying to me ‘Madigan’s pass is a lot whippier than yours.’ That always stuck with me. I passed a lot with my arms. After that, I was like, ‘Guess I’ll change that so.’”

Fast forward to Saturday, and there’s a real chance for the US, if MacGinty kicks his goals and Carbery falters, for the US coached by former All Black supremo John Mitchell to catch Ireland cold.

“We are just going to push the tempo of this game. That’s what Mitch wants us to do. Regardless of the opposition. There is definitely an opportunity to turn Ireland over but we just got our preparation right.”

Galgorm Castle resort could rescue 2020 Irish Open 11:25
Iain Henderson out for up to 10 weeks after hip surgery 10:26
Leeds sign teenager Charlie Allen from Linfield 10:08
Celtic launch investigation into player’s secret trip to Spain 09:29
Relieved Solskjær says he’s prepared for either Sevilla or Wolves 07:50
Crossword Get access to over 6,000 interactive crosswords