From Leitrim to New Zealand to the Western Front: An Irishman’s Diary on Sir Alexander Godley 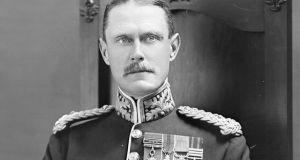 The best views of the Messines Ridge battlefield are from the lips of the giant Spanbroekmolen mine torn from the earth 100 years ago.

The largest of the 19 underground mines blown on the morning of June 7th, 1917, is known with some irony as the Pool of Peace. Frog spawn, and water lilies propagate. It is hard to believe something so beautiful could come from something so ugly.

From here you can see the low hills sweep gently upwards to the adjacent villages of Messines (Mesen) and Wijtschate (Wytschaete).

From this vantage point, the dome of the church at Mesen and the familiar spire of Wijtschate mark the objectives of the men who went over the top before dawn on that hot June morning. To the right of the church at Mesen, on the edge of the hill, one can make out the round tower that marks the site of the Island of Ireland Peace Park.

The peace park is an impressive feat of remembrance, but strictly speaking it is not in the right place. The village of Messines (it went by its French name then and by its Flemish name now) was taken not by the two Irish divisions who fought together at Messines Ridge, but by the New Zealand Division in II Anzac Corps.

There is, however, an Irish connection in the person of the colourful commander of II Anzac Corps, Gen Sir Alexander Godley.

Godley was a member of the same family who have owned Killegar outside Carrigallen, Co Leitrim, for more than 200 years. He was the grandson of John Godley who built the present house in 1813.

Alexander Godley was born in 1867 and named after a member of the family who was killed at the siege of Alexandria in 1801. When he was 10 his father died, leaving the family in penurious circumstances. Godley’s mother had to take him out of his English public school and send him to the United Services College in the splendidly named Westward Ho! on the Devon coast. The USC was a finishing school for those boys of modest means seeking a commission in the British armed forces.

Here he shared a dormitory with another aspiring soldier of modest means, one Rudyard Kipling. Godley remembered Kipling as “too clever for us and rather different to us boys”.

Godley joined the Royal Dublin Fusiliers at the age of 19, the start of a lifetime in the service of the British Empire. In 1910 he was offered the appointment of general officer commanding the New Zealand forces. Godley was initially reluctant. New Zealand, then a sleepy, underpopulated British Dominion, was at the ends of the Earth. It was unlikely to ever be the subject of a foreign invasion, save perhaps from the penguins in the Antarctic.

He was not to know that he would find himself four years hence at the head of an expeditionary force from that nascent nation destined for Europe.

He ought to have been sacked after a notorious incident during the doomed Gallipoli campaign. Godley, as the Anzac general commanding the Australian 3rd Light Horse Brigade, ordered an attack on a heavily fortified Turkish position known as the Nek. More than 150 men were killed in an attack, which was the subject of Peter Weir’s film Gallipoli.

Godley survived and was promoted. The Anzacs moved to the Western Front, and it was here Godley found himself in charge of II Anzac Corps at the Battle of Messines Ridge.

His men were positioned to the right of the two Irish divisions, the 16th (Irish) Division and 36th (Ulster) Division. Godley had under his command two Australian divisions, a New Zealand division and the 25th Division of the British army, a combined force, he would recall later, as equal to twice that under the command of the Duke of Wellington at Waterloo.

The New Zealand Division held the centre of the line. After the massive underground mines were blown, the men swarmed forward and captured the village and the defence lines beyond it in less than two hours.

Godley arrived on the scene shortly afterwards. He remembered: “There is not one single foot of ground which is not a shell-hole. The ruins of the building are extraordinary to see – nothing left but just heaps of bricks and mortar.”

The New Zealanders were victims of their own success. They had advanced so far that they left themselves exposed to enemy artillery fire. For two days the German batteries rained down shells on the attackers.

By the time the New Zealand Division was relieved two days later, it had sustained 3,700 casualties, with 700 dead. But even those terrible numbers were eclipsed under Godley’s watch at the Battle of Passchendaele. On October 12th, 1917, New Zealand suffered the worst day in its military history. Some 846 men were killed.

After the war Godley secured a number of administrative positions in the dwindling British Empire. Like many of the Anglo-Irish, he was incredulous at the country Ireland became after the war. In his autobiography, Life of an Irish Soldier, he recalled the ignominy of arriving in the country he called home to be told to wear civilian clothes and carry a pistol.

The memorial to the New Zealanders who died at Messines Ridge is also visible from the lips of Spanbroekmolen. Beneath the familiar fern are the words “From the uttermost ends of the earth”.

1 Thirteen further deaths and 1,269 new cases of Covid-19 recorded in the Republic
2 Level 5: Fines for house parties and breaching 5km rule, while permitted funeral attendance up to 25
3 Government planned to extend sweeping pandemic powers with 45-minute debate
4 Life under Level 5: What will the next six weeks look like for the State?
5 Support bubbles: Everything you need to know
Real news has value SUBSCRIBE