The arrest of John Cunningham, a Donegal man living illegally in Boston has sent a shock wave of anxiety through the city's Irish community. He appeared on an RTE Prime Time programme in March on the undocumented Irish. Video: RTE /Prime Time 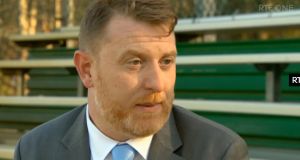 John Cunningham: his arrest comes amid a wide-ranging crackdown on undocumented immigrants by US president Donald Trump’s administration.

The arrest and impending deportation of a prominent Donegal man living illegally in the Boston area has sent a shock wave of anxiety through the Irish community in the city.

John Cunningham (38), a former chairman of the Boston Northeast GAA, was arrested by immigration and customs enforcement officers at a residence in Boston last Friday.

His detention has sparked fears of further arrests of undocumented Irish living in Massachusetts under the Trump administration.

The native of Glencolmcille, Co Donegal, had been living in the United States since 1999 and had not returned to Ireland in 16 years. He featured in a RTÉ Prime Time programme broadcast in March in which he talked about living as an undocumented individual in the country.

Mr Cunningham was arrested for “immigration violations,” a spokesman for ICE, Khaalid Walls told The Irish Times. The Donegal man “entered the country lawfully under the visa waiver programme but failed to depart in compliance with the terms of his visit,” he said.

“Cunningham is currently in ICE custody pending removal from the United States. Visa waiver programme participants waive their rights to a hearing before an immigration judge and are subject to mandatory detention,” said the spokesman.

The Donegal man is being held at the South Bay House of Correction, part of the Suffolk County jail system in Boston.

The visa waiver programme permits visitors to travel to the US for tourism, business or while in transit for up to 90 days without having to obtain a visa. Overstaying the term of the programme is one of the most common ways that undocumented Irish enter the country.

Locals within the Irish community in Boston fear that Mr Cunningham’s arrest and detention marks an increase in enforcement activity by US immigrants officers acting under the Trump administration’s direction to increase detentions of undocumented immigrants.

Ronnie Millar, executive director of the Irish International Immigration Centre in Boston said that his phone had not stopped ringing since Mr Cunningham’s arrest.

“People are lying low, trying to keep under the radar screen. They are preparing family readiness plans in case the mother or father gets picked up. This has caused widespread concern.”

Mr Cunningham’s arrest comes amid a wide-ranging crackdown on undocumented immigrants by US president Donald Trump’s administration as part of an expansion of those who can be targeted for deportation.

The Boston Globe reported on the day of Mr Cunningham’s arrest that the number of federal arrests in Boston of unauthorised immigrants more than doubled to 444 compared with the same period last year under president Barack Obama.

The US federal agency has said that the tactics are not new but reflect an order by US attorney general Jeff Sessions that allows agents to target an expanded pool of illegal immigrants.

Explaining why he continued living undocumented in the US for so long, Mr Cunnnigham told RTÉ’s Prime Time in its March programme that time passes quickly and the illegal Irish find themselves married and with a job and that eventually the US becomes “your home”.

He expressed hope that the immigration laws would eventually change under one of the US political parties allowing the undocumented to obtain legal status to live openly in the country.

“You have to keep hoping that something will change and I think eventually something will have to because sooner or later some party is going to have to look at immigration and say we’ve got to figure out an avenue to make this work,” he said.

Mr Millar said his advice to undocumented Irish in the US was to make sure that they have plans in place should they be detained, to speak with immigration attorneys, and not to open their door to ICE officials unless the agents have a signed warrant.

Irish Times Abroad is seeking reaction from Irish people living in the US. Email abroad@irishtimes.com, including a few lines about you and what you are doing in the US. A photograph is optional. If you are undocumented or would prefer to stay anonymous for other reasons, please indicate this in your response.