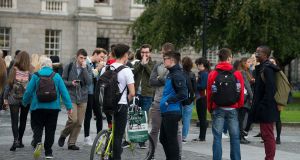 International fees for ‘non-EU’ students at Irish universities range from €8,000 to over €20,000 per academic year. Photograph: Dave Meehan/The Irish Times

Almost 60 per cent of Irish expat parents in Asia are not interested in sending their children to attend university in Ireland as they do not feel Irish higher education institutions offer value for money, a new survey has shown.

Britain and the US are the top destinations of choice.

Children of Irish nationals in Asia are discriminated against, according to the Irish Chamber of Commerce Singapore, which conducted the survey, as they are generally seen as non-EU international students, even when holding Irish passports.

According to Irish law, students are liable for international fees if they have lived outside the EU for more than two of the past five academic years.

This compares to the current €3,000 annual student contribution to academic fees paid by undergraduates from Ireland and other EU countries.

“The study is the first of its kind and we hope it will encourage a debate among the Irish public, the diaspora, policymakers and Irish universities about the opportunities and benefits of attracting Irish diaspora children to attend Irish universities as international students,” said Conor McCoole, president of the Irish Chamber of Commerce Singapore.

The treatment of the children of Irish expats is inconsistent with the treatment offered to Irish nationals and UK expatriates when making applications to British higher education institutions.

When parents do send their children to college in Ireland, it is primarily for reasons of family and links to “home” based on a personal knowledge of the Irish education system, the survey found.

Cost is not the most significant consideration, but value for money is important and this is perceived as an issue in the Irish university system for survey respondents.

The report points out how the state contributes less on a per student per annum basis for higher education than it does for a secondary school students, and that in terms of resources per student, Ireland is now at the bottom of the OECD rankings.

“Irish universities need to ensure that quality is maintained and the decline in the international rankings is halted. This will begin with addressing the staff-student ratios and ensuring that the Brexit event is taken as an opportunity to relocate talent from the UK to Ireland given the continued access Ireland will have to EU funding programmes. Quality, as found in our survey, drives a large part of the decision-making processes of parents,” the survey said.

The Government should ensure a special status for first generation diaspora children within the Irish higher education system, by either putting them in the same category as EU Citizens, or in a newly created special category, the report recommends.

Universities should also do more to develop relationships with expatriates and recruit students in major Asian cities such as Hong Kong and Singapore, and the Government should introduce measures such as expanding academic staff numbers and reducing staff-student ratios, which are currently undermining Ireland’s international rankings.

The survey was compiled by the Trinity College Dublin economist Charles Larkin and University of Toronto economic geographer Qiantao Zhang. It received 172 responses from 11 countries, of which 111 responses were from Singapore.