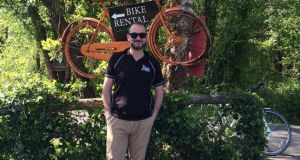 Today’s generation of emigrants are often seen as going on journeys from which there might be no return to their native land. Over the past decade, in times of austerity, Irish parents have watched their sons and daughters leave the country, often bound for places that are paradoxically hot and cool at the same time.

Social media posts about Sundays spent on Sydney’s beaches let everyone know what it’s like to be living the dream, far from home. But there are others within Generation Emigration who live out those dreams for a while, and then come back home to put down roots and build a different set of dreams, whether on the family farm or in a brand new business.

Up and down the country, from Donegal to Kerry, there are countless examples of this, and often such stories go untold. It is probably not as sexy to come back home, for personal or family reasons, as it is to keep exploring new and exotic parts of the world.

But there is something heroic in deciding to return home; capturing a slightly different sense of the pioneering spirit that Irish immigrants, the world over, have always been renowned for.

Often too, such returns involve huge financial and personal sacrifices. It’s not a new phenomenon – coming home after being away – but there is a sense of freshness in the ideas that our immigrants are bringing back with them.

One such example of this comes in the case of Castlebar man Fergus Walsh, and the way in which his own journey has echoed that of his home town. Born and reared in Breaffy, Fergus left Ireland in 2003 for South Korea, a place that for all its many differences, has a lot of similarities to Ireland. Koreans have a strong sense of community, love the outdoor life, and are sociable people.

Like many young people from all over the English speaking world, Walsh found a natural affinity with this most Irish of Asian countries. Starting off as an English language teacher, he progressed to a lucrative career working for an international sales company, and spent a decade far away from home.

However, throughout this time abroad, Walsh says that he always “set a target to be back in Ireland by the age of 35”, and he realised this ambition, even though he left a good job in Asia to come home to start from scratch.

This was in 2013, when Ireland remained firmly in the grip of austerity. Opportunities were few and far between, so he took up basic office work that left him wondering if he’d made the right decision to come back. After a year and a half of being back and going nowhere in career terms, he decided to set off on the emigrant trail once more, and this time headed to San Francisco.

Ready to leave a second time, with probably no going back, he then experienced what he calls “a sliding doors” moment, getting a phone call from a friend with a business proposal to open up a Bikes & Boards business.

Attracted by the idea, and after considering it, Walsh turned his back on the emigrant trail. Instead, he started out on a new journey in tandem with a couple of business partners in his home town. Some months later, they formally opened their business within the Lough Lannagh Holiday Village, in 2015, the same year that a new 8km Greenway came into being, linking Castlebar to Turlough, and the National Museum of Country Life. Around this time too, Walsh says that he began to see “a noticeable difference in tourism, with more Irish people holidaying in the west of Ireland”.

Castlebar, he says, began to acquire a feelgood factor, both economically and socially, as the green shoots of recovery became more evident. The town, which had been “devastated by recession began to get back on its feet and started going in the right direction”.

Nowadays, those green shoots of recovery are becoming increasingly evident. In recent times, six restaurants and three new pubs have opened in the town, as well as its main hotel reopening at the weekends. Added to this, a new leisure centre and gym is in the process of being developed, as part of an outdoor exercise hub.

It is noticeable, too, on a visit to Castlebar, that it is not just tourists and returning emigrants who are drawn to the town. Local colleges have become an attractive destination for overseas students and on a recent visit there I almost literally bumped into Austrian, Czech and American students cycling on the Greenway and singing the praises of Castlebar. And best of all, speaking in traces of the distinctive and lyrical Mayo accent.

There are others, too, in the town who emigrated there during the good times and have stayed through the tougher parts of recent history. One such example is businessman Mans Geerinck from the Netherlands, who has been running holiday cottages in the town’s Derryhick lake area since coming to Ireland in 2000. He talks about “the beautiful variety in nature” that attracted him here in the first place.

Though the recession has hit Castlebar quite hard, it is this kind of tourism that will hopefully serve to regenerate the west of Ireland and bring it back to the level of trade that was evident in those “busy and lively” days when Geerinck first arrived. The west of Ireland needs this type of business to keep its culture, economy, and communities together.

It needs tourism too, and help from the rest of Ireland by people actively using its cycle shops and holiday cottages, so as to finance and support its blossoming tourist infrastructure.

Historically, the word emigration has had negative connotations in Mayo. On the main street in Swinford, for example, there is a sculpture dedicated to the mass emigration of the 1950s, when a generation of men, young and old, made a gradual exodus to England and places further afield.

The times, though, may be changing for the better, with towns such as Castlebar able to attract students, tourists, and business people from across Europe and the wider world.

Fittingly though, in this story, the most striking journey has been made by one of their own. Like many of today’s returning emigrants, Fergus Walsh has brought ideas and ambitions back from the other side of the world. Hopefully, through such stories, Ireland can write a better future for its present and future generations, and towns such as Castlebar can take pride of place in a narrative of Irish emigration that isn’t always about one-way journeys.

Paul Breen is the author of works of fiction relating to Irish immigration such as The Charlton Men (amazon.co.uk/Charlton-Men-Paul-Breen-ebook/dp/B01M8O7GE8/) and tweets @CharltonMen

For further information about Bikes and Boards in Castlebar see facebook.com/Bikes-boards