Revealed: Best and worst cities to live and work in 2020 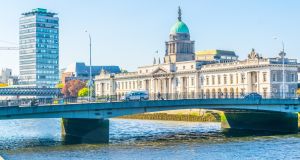 The Custom House next to the River LIffey in Dublin. Photograph: iStock

Dublin has been ranked the worst city in the world to find a place to live for expats in a new study published on Tuesday.

Ireland’s capital was in last place of the 82 cities surveyed in the Expat City Ranking 2019 by Internations, which is mainly a social community for expats, with San Francisco and Munich second and third worst.

A total of 86 per cent of people surveyed from overseas living in Dublin said they found it difficult to get housing, compared to an average of 32 per cent globally.

More than 20,000 people living and working abroad from their home countries took part in the survey. They were asked how satisfied they were with the affordability of housing and how easy it was to find housing, but not if they were renting or buying a house. This is the second year Dublin has topped the survey for having the least access to affordable housing.

“The cost of living is a turn off, it’s a nightmare to find an apartment to rent and equally so to find good childcare options,” one Brazilian respondent said. Another survey participant from Portugal said the rental market was so bad it was causing them to consider leaving the city.

Overall, Dublin ranked 72nd out of cities surveyed, with quality of urban living, ease of settling in, finance and housing and urban work life all taken into account.

Dublin also ranked 76th out of 82 for cost of living, but this figure was not included in the overall ranking calculations to avoid over-representing financial aspects.

Dublin’s overall ranking was two points worse than London (in 70th place), but scored better in the "urban work life" category for job security and work-life balance. However, London fared better in the quality of life, and finance and housing categories.

Kathrin Chudoba, head of studies with Internation, said the poor performance of Dublin is mostly due to expats' struggle with housing and finance.

“A total of 88 per cent do not find housing in Dublin affordable, and a similar share of survey participants think it’s difficult for expats to find a place to live in. Additionally, about three in four survey participants rate the local cost of living negatively,” she said.

However, the good news is international expats considered Dublin to be good for career opportunities. Dublin is ranked as the third best city in the world for job and career, behind Ho Chi Minh City (first) and Prague.

“Dublin performs better than in previous years in the Urban Work Life Index, landing in the top 10 in this category, with 75 per cent of expats happy with their local career opportunities. Friendly locals are another reason why expats like Dublin: the clear majority of expats considers the locals to be generally friendly as well as friendly towards foreign residents.”

A total of 66 of people surveyed said they were happy living in Dublin and the city scored in 16th place for “local friendliness”.