From Roscommon to Hollywood - The story of Maureen O’Sullivan 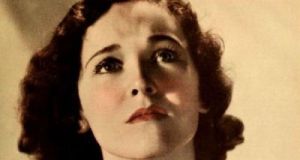 Maureen O’Sullivan in Photoplay by Clarence Bull in 1832. Photograph: Wikimedia

Maureen O’Sullivan, bright Hollywood star of the 1930s and 1940s, was born in 1911 on Main Street, Boyle, Co Roscommon. Her family were well-off enough to give O’Sullivan a good education in a convent school in Dublin, followed by a finishing school in Roehampton, England.

Socially conscious Catholics, the family encouraged O’Sullivan to work with the poor in Dublin upon returning from finishing school, but a full social calendar meant she was soon spotted by director Frank Borzage at the Dublin Horse show. In 1929, she and her mother left for New York, and a contract with Fox.

Her first film, Song O’ My Heart (1930) had her appearing as Count John McCormack’s daughter and although her performance is subdued due to inexperience, the movie was a success.

Her days at Fox were not happy ones, however, with the studio pitting her against their star actress, Janet Gaynor, who was pushing for better pay. As soon as the rift with Gaynor was healed, O’Sullivan was dropped by the studio, despite the success of her pairing with Will Rogers in The Princess and the Plumber (1930).

I have lived in a great many places but the best part of me I owe to Boyle. Its influence, Lough Key, the countryside, has given me whatever poetry is in my soul

The loss of her contract left her feeling “lonely, forsaken and unwanted”. However, during the year of 1932 she signed with MGM and the beginning of a series which would come to define her career - her pairing with Olympic swimmer Johnny Weissmuller as Tarzan and Jane in a series of films spanning a decade from 1932-42.

The first two instalments of the series are perhaps of most interest to viewers now: Tarzan the Ape Man (1932) and Tarzan and His Mate (1934). These two films were released before the introduction of the “Hays Code” - a set of guidelines on propriety in Hollywood Films, which was implemented from 1934.

The costumes in the first films are scantier and the sexual chemistry more pronounced. O’Sullivan recalled the scandal that followed a swimming scene in Tarzan and His Mate where her breast became partially exposed: “It started such a furore, with thousands of women objecting to my costume”.

In the later Tarzan films, adherence to the Hays Code led to increasingly silly plot devices. In 1939’s Tarzan Finds a Son (the hint is in the title), the couple adopt a child because of course as they were unmarried, there was no chance of biological children. By this time O’Sullivan’s career had expanded beyond the horizons of the Tarzan films, with successful movies such as The Thin Man (1934), Anna Karenina (as Kitty in 1935 ), the Marx Brothers’ A Day at the Races (1937), and the 1938 film A Yank in Oxford, where she played rival to school friend Vivien Leigh.

However, when word got out about the plan to kill off the character of Jane at the end of Tarzan Finds a Son, there was a public outcry, and O’Sullivan was given a pay rise. Tired as she was of the series, she appreciated the artistry and effort that went in to creating them: “Everyone cared about the Tarzan pictures and we all gave of our best. They weren’t quickies - it often took a year to make one.” Despite the series ending with the silly escapade Tarzan in New York in 1942, O’Sullivan will forever be associated with the quote “Tarzan . . . Jane,” almost always misquoted.

O’Sullivan had met her husband, director John Farrow, while working on his reshoots of Tarzan Escapes in 1934 and the two settled down together to raise a family in 1942. Among her seven children was the actor Mia Farrow, who O’Sullivan nursed through polio in the 1950s.

When Frank Sinatra proposed to Mia, O’Sullivan’s response was, “At his age, he should marry me!” And although she was engaged to play Mia’s mother in Woody Allen’s Hannah and Her Sisters (1986), she, and later Mia, were unhappy at the way the script dramatised their family life. After her break up with Allen, Mia would recall: “It was my mother’s stunned, chill reaction to the script that enabled me to see how he had taken many of the personal circumstances and themes of our lives, and, it seemed, had distorted them into cartoonish characterisations. At the same time he was my partner. I loved him. I could trust him with my life. And he was a writer: this is what writers do. All grist for the mill. Relatives have always grumbled. He had taken the ordinary stuff of our lives and lifted it into art. We were honoured and outraged.”

Allen fired O’Sullivan from the movie, but her credit remains. O’Sullivan returned to acting in later life, starring in a number of stage plays, and in 1988 she revisited Boyle at the invitation of a local committee, remarking “I have lived in a great many places but the best part of me I owe to Boyle. Its influence, Lough Key, the countryside, has given me whatever poetry is in my soul, whatever love I have of God. Whatever it is, it comes from here.”

O’Sullivan passed away after a heart operation some 10 years later in 1998. Her legacy was an extraordinary career spanning from pre-code Hollywood to Woody Allen films and Broadway, and the beginning of an artistic dynasty including Mia Farrow, sculptor and environmentalist Patrick Villiers Farrow, and journalist Ronan Farrow.

This Extraordinary Emigrants article was written by Jessica Traynor, deputy museum director at EPIC The Irish Emigration Museum, an interactive museum that tells the story of how the Irish shaped and influenced the world.