Welcome to my place... Buenos Aires

‘I love my life here, there is never a dull moment politically’ 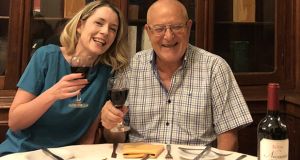 Louise Molloy and her father in law Antonio Pintor enjoying a meal in family restarant Los Pinos “which sums up what I love about Buenos Aires - family food and good wine!”

Louise Molloy went to Buenos Aires in 2011 after graduating as a pharmacist. She met her now husband in Sligo and when he decided to go back to Buenos Aires to help run his family’s restaurant business, she decided join him and try “to get my head around their particular brand of Spanish or Casitillano”.

After nine years, she is still there working for a pharmaceutical company. “I love my life here, there is never a dull moment politically, but the creativity and laid-back attitude of the Argentine people never ceases to amaze me.” She has one daughter and says her fair skin is the only thing that belies her fiery Argentina heritage.

What do you like about living in Buenos Aires?
The warmth of the people is what really attracted me to Buenos Aires. Learning the language certainly helped me adapt, but even when I couldn´t string two words together in Spanish I never felt like an outsider and that is really what sums up the culture here – open and welcoming.

And the food! I have to mention the food, although simple from a culinary point of view, what they do, they do like no other. The most emblematic dish of Argentina is the Asado. Roughly translated as a BBQ it is basically a dish with mountains of meat piled high and typically shared between three or more people. And sharing is the key here, many a friendship has been sealed for years over a hearty Asado doused in spicy chimichuri.

Where is the first place you bring people to when they visit Buenos Aires?
I love books and the theatre so one of the most amazing places for me to bring people here is to El Ateneo, named by National Geographic as one of the most beautiful bookshops in the world . Originally a theatre, then a cinema, it showed the first sound motion pictures in Argentina.

Go for a walk, stroll, bike ride through the woods of Palermo, a veritable oasis that makes you forget you are in the middle of a bustling city

It is now a stunning bookshop, which still has the architecture of the old theatre (light fixtures and intact theatre boxes). It invites you to you sip on a cortado (Argentine espresso) in the homey café at the back while you read about what the great Latin writer Borges thought about our own James Joyce’s Ulysses.

The top three things to do there, that don’t cost money, are ...
Go for a walk, stroll, bike ride through the woods of Palermo, a veritable oasis that makes you forget you are in the middle of a bustling city. I love running through the grounds, around the many lakes and the rose garden. It reminds me of Dublin’s Phoenix Park and lets you recharge after a busy working week.

The excellent free Buenos Aires walking tour gives you a flavour of the city and has an amazing tour of Recoleta, one of the most up market neighbourhoods that led many to dub it the Paris of the south due the distinctive architecture and preponderance of quaint cafes on every corner.

Recoleta cemetery is also open to free visits and you can see the famous tomb of Eva Peron as well as a monument to Admiral William Brown who is considered the father of the Argentine navy and hailed from Co Mayo no less.

Where do you recommend for a great meal that gives a flavour of Buenos Aires?
Of course I have to recommend the local parilla (grill) restaurant Los Pinos in Recoleta which has been run by my husband´s family for nearly 20 years. Conserving décor from an old pharmacy, it has an otherworldly charm and you will find the best steak (ojo de bife) this side of the Rio de la plata without it costing you your holiday budget. Be sure to order with a good Malbec and you won´t leave disappointed.

Where is the best place to get a sense of Buenos Aires’s role in history?
For me it would be the remarkable, Plaza del Mayo. It has been the site of so many pivotal moments in Argentina’s history; from the first declarations of independence from Spain, to the famous political speeches from Peron from the balcony of Casa Rosada, that are immortalised in the film Evita.

Later on, during the darker periods of the military dictatorship it continued to be a symbol of resistance as a small group of mothers took a stand, marching in silence as the names of their disappeared children embroidered in headscarfs screamed louder than any protest ever could.

For me it symbolises the resoluteness of the Argentine people, that no matter what they face, their sense of identity never falters and they always return to the cradle of their independence to remind themselves of who they are.

What should visitors save room in their suitcase for after a visit to Buenos Aires?
Firstly Dulce de Leche, which is as Argentine as tango itself although the Uruguayans may dispute that claim. It is a delicious syrupy concoction that the word caramel just doesn´t do it justice. Single handedly responsible for the extra 3kgs I gained during my first few months in BA, but so worth it!

The second item would be Yerba, to make a drink known as Mate. Go to any park anywhere in Buenos Aires and you will see people sipping on this suspicious looking metal straw with a flask under their arm. Sharing Mate with friends and family is quite a ritual and people are as fiercely loyal to their type of Yerba as Irish are to their brands of tea. Be sure to buy a Mate set to take back home before you leave.