‘I am not a huge fan of Britain...It’s a silly and frustrating country’ 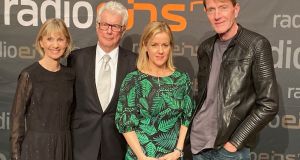 Best-selling thriller author Lee Child, creator of the Jack Reacher series, is to apply for an Irish passport to sidestep the risk of post-Brexit travel restrictions in Europe.

Child is the pen name of Coventry-born James Grant, who divides his time between the UK and US and whose Belfast-born father entitles him to Irish citizenship under the Belfast Agreement.

He was in Berlin on Saturday evening as part of a European ‘Friendship Tour’, speaking out against Brexit alongside fellow best-selling British authors Kate Mosse, Jojo Moyes and Ken Follett.

“I haven’t got the passport yet but I will do very soon, it feels like I’m cheating to be honest as I will get in the back door,” Mr Child told The Irish Times. “I am not a huge fan of Britain, even though I was born there. It’s a silly and frustrating country, which is why I moved to America.”

On a four-city tour of Berlin, Madrid, Rome and, on Monday evening, Paris - the four authors, with total sales of over 300 million books, appealed to their European readers not to turn their back on the millions of UK citizens mortified by Brexit.

Mr Child was critical of British prime minister Boris Johnson, whom he portrayed as the product of an elitist, sexist system.

“If he had gone to my school he would not now be prime minister,” said Mr Child. “He would be in a wheelchair.”

Asked how they would feature Mr Johnson in their work, Ms Moyles suggested he would be “the terrible first marriage you had to escape”. Mr Follett saw Mr Johnson in one of his historical epics as “the stupid bishop”. Kate Mosse envisioned him as “the third son who did nothing but eat, was entirely incapable of doing anything on his own and, when called to save the castle, he runs away”.

Ms Moyes said their European tour is about “reaffirming our emotional, cultural and spiritual links to the rest of Europe, a way of feeling less powerless against the politicians making a terrible mess”.

One of the under-reported Brexit risks, Ms Mosse warned, is a draining away of European cultural exchange and the departure of European creatives who have enriched the British arts scene.

“We will survive but what about flourishing?” she asked. “We should be flying and singing, not just bobbing along.”

“The fact that fewer young people will move to work in the rest of Europe will mean they will be less cosmopolitan, know less about our neighbours,” he said. “It is a complete disaster.”

Asked by the Irish Times what would happen to the British prime minister if locked up for a weekend in a remote Cornwall farmhouse with Jack Reacher, the six foot five ex-military policeman hero of his thrillers, Lee Child suggested: “Only one of them would come out of it alive, and it wouldn’t be Boris.”