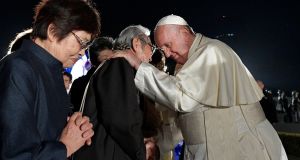 Pope Francis travelled to Hiroshima and Nagasaki to demand that world powers renounce their nuclear arsenals, declaring the use and possession of atomic bombs an “immoral” crime and a dangerous waste.

Standing before survivors of the 1945 US atomic bombings, the pope denounced the steady erosion of arms control agreements and rejected the Cold War-era doctrine of deterrence that had been sanctioned by the Catholic Church for nearly three decades.

In the rain of Nagasaki and the silent darkness of Hiroshima, he urged political leaders to accept that true peace and international security cannot be built in a climate of distrust, but rather solidarity.

“The use of atomic energy for purposes of war is immoral,” he declared during a nighttime prayer at Hiroshima’s peace memorial.

He added off-the-cuff: “And the possession of weapons is also immoral.”

Francis visited Hiroshima and Nagasaki during the first full day of his three-day trip to Japan aimed at emphasising his call for a global ban on atomic weapons.

Nagasaki was the perfect place to begin, the birthplace of Christianity in Japan where he could honour innocents killed in war as well as Christian missionaries and martyrs killed for their faith.

The mood there was sombre, darkened by the downpour that drenched the terraced fields and rice paddies and the hundreds of Japanese who came out in plastic raincoats to witness the second pope to pay his respects after St John Paul II in 1981.

The scene was equally restrained in Hiroshima, where a brief round of applause when the pope arrived.

After a gong signalled a moment of silence and the pope lit a candle of peace, two survivors offered their evidence about the “demonic” atom bomb.

“No one in this world can imagine such a scene of hell,” said Yoshiko Kajimoto, who was 14 at the time and was working in a factory 1.4 miles north of ground zero when the blue light of the bomb tore through the windows, collapsing the building on top of her.

Standing solemnly before the pope, she described what she saw along the evacuation route, saying: “There were more and more people coming by. Their bodies were so burned and totally red.

“Their faces swollen to double size, their lips hanging loose, with both hands held out with burnt skin hanging from them. They no longer looked human.”

Ms Kajimoto had two-thirds of her stomach removed in 1999 because of cancer, and now suffers from leukaemia.

“I work hard to bear witness that we must not use such demonic atomic bombs again, nor let anyone in the world endure such suffering,” she said.

‘The fruit of war’

Her evidence clearly had an impact on the pope, whose own emotional reaction to images of the Nagasaki aftermath prompted him last year to print up thousands of pocket-sized copies of a photograph of a young Nagasaki boy carrying his dead brother on his back that was taken by American military photographer Joe O’Donnel.

The pope had the words “the fruit of war” printed on the image, and a poster-sized copy was on display in Nagasaki, where Francis met with the photographer’s son, Tyge, an invited guest.

The Holy See was among the first countries to sign and ratify the new UN nuclear prohibition treaty, and Francis went further than any pope before him in saying in 2017 that not only the use, but the mere possession of atomic weapons is “to be condemned”.

Up until Francis’ 2017 condemnation, the Catholic Church had held that nuclear deterrence could be morally acceptable in the interim as long as it was used toward mutual, verifiable nuclear disarmament.

The Holy See, however, has seen that the deterrence doctrine has essentially resulted in a nuclear status quo, with arms control treaties collapsing.

“Many liberals applauded and conservatives criticised the 2017 statement because they saw it as abandoning the prior teaching that deterrence can be morally acceptable if used as a step toward disarmament,” said Gerard Powers, director of the Catholic Peacebuilding Network at the University of Notre Dame’s Kroc Institute.

Tomohide Hirayama, a former Nagasaki resident who travelled from another prefecture to see the pope, said his religious faith was different but he fully supported Francis’ call for a nuclear-free world.

“There were atomic attacks twice in history, and there should never be a third time,” he said. “I feel that strongly, and isn’t that what the pope is saying?”

The second one dropped three days later on Nagasaki and killed another 74,000 by the end of the same year.

Many of the survivors have suffered the lasting impact of radiation and developed various forms of cancer.

“In a world where millions of children and families live in inhumane conditions, the money that is squandered and the fortunes made through the manufacture, upgrading, maintenance and sale of ever more destructive weapons are an affront crying out to heaven,” Francis said.

He lamented the “climate of distrust” that is eating away at nonproliferation efforts and the arms control framework, a reference to a series of violated treaties and the demise this year of the Intermediate-range Nuclear Forces treaty, a landmark Cold War-era arms control agreement.

The US formally withdrew from the treaty in August, after accusing Moscow of developing a Russian missile system prohibited under it.

The mass was celebrated in Nagasaki’s baseball stadium before a crowd of some 35,000 and the remains of a wooden statue of the Virgin Mary rescued from a cathedral destroyed in the bombing.

The statue, which was remarkably well preserved despite the blast, was featured on the altar.

Francis’ visit to Nagasaki also gave him the chance to honour Christian missionaries and martyrs centuries after St Francis Xavier first brought Christianity to the Japanese archipelago in 1549.

He laid a second wreath of flowers at the memorial of 26 Nagasaki Martyrs, who were crucified in 1597 at the start of the two-century wave of anti-Christian persecution by Japanese rulers.

The example of the missionaries and martyrs, and the Hidden Christians who kept their faith alive underground for generations, helped inspire a young priest named Jorge Mario Bergoglio to be a missionary in Japan.

“May we never forget their heroic sacrifice,” Francis said at the memorial.