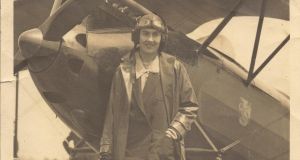 Six Irish women from around the world, all of whom achieved the extraordinary during their lives but were largely unknown, will be celebrated in Herstory, a six-part documentary that starts on RTÉ One next Monday. These women changed lives and many, the course of history.

Dr James Barry was a pioneering surgeon from Cork whose achievements include performing the first successful caesarean section in the British Empire in which both mother and baby survived. But possibly the most startling and intriguing thing about Dr Barry is that she was a woman who lived as a man to have a medical career. In 1809, the young Irishwoman set out on a course of deception, which would fool the brightest and highest in the British Empire; dreading the confined life of a woman, she had decided to transform herself into a man. Even if they had suspected something, they wouldn’t have believed it. According to the values of the day, it was inconceivable that a woman could master the intellectual challenges of medicine and surgery, let alone the physical ones; this was a time without anaesthetics, when surgical patients had to be held down, and amputation was a common treatment for fractures and infections. But Margaret Bulkley had mastered it all and excelled. Read her full story here.

Another Corkonian, activist and union leader Mother Jones, was dubbed “the most dangerous woman in America”. She founded the Social Democratic Party and helped establish the Industrial Workers of the World. She was a force of nature. One district attorney called her the most dangerous woman in the United States. The writer Upton Sinclair called her the walking wrath of God. But the left-wing firebrand remembered by history as Mother Jones was born simply Mary Harris, in Cork city, in 1837. Harris was well acquainted with hardship from an early age. During the Great Famine she witnessed cartloads of emaciated skeletons being wheeled through the streets of Shandon for burial. Read her full story here.

The record-setting, daredevil aviator Lady Mary Heath. She was born Sophie Peirce-Evans from Knockaderry in Co Limerick, near Newcastle West, was one of the best known women in the world in the 1920s. Getting over a troubled childhood (her father murdered her mother), Peirce-Evans took a top-class degree in science, was a dispatch rider during the first World War, a champion athlete and the first woman to hold a commercial flying licence. She was also the first recorded woman to do a parachute jump. Known as Lady Heath, following her second of three marriages, she flew an open-cockpit plane from Cape Town to London. It took three months. Making front-page news on both sides of the Atlantic, she was, for a while, one of the most famous women in the world.She later became the first female mechanic in the US.

Groundbreaking computer programmer Kay McNulty, a Donegal Gaeilgeoir, was one of the six original programmers of the ENIAC (Electronic Numerical Integrator and Computer), the first general-purpose electronic digital computer. While raising seven children, she continued, uncredited, to programme computers her husband developed. McNulty’s passion for mathematics pre-dated her marriage to an eminent scientist in 1948, but social norms obliged her to continue her pioneering programming work unpaid, in the confines of the family home. At the time, Irish women were more likely to emigrate than Irish men, and early in life McNulty enjoyed the opportunities that emigration presented. Kay graduated from Chestnut Hill in Philadelphia in 1942 with outstanding grades in maths, one of just three students to major in the subject. She longed for a job that would allow her to use maths, but dreaded teaching. Read her full story here.

Dubliner Oonah Keogh, trader and entrepreneur, became the world’s first female member of a Stock Exchange. The Irish woman moved to London in 1924 following the end of her Mediterranean tour, where she briefly studied and developed a deep interest in politics. However, in 1925 she returned to the fledgling Irish state and made history when on May 4th, 1925 she lodged an application to become a full member of the Dublin Stock Exchange, the first woman ever to do so. Her application was a cause for heated debate among the existing members and in some respects these discussions mirrored many others taking place at the time regarding the role women should play within Irish society. The barriers to entry were formidable. Not only did you have to pay an application fee of over five hundred pounds, hold securities of over two thousand pounds and cover a hefty annual subscription but you also needed references from other wealthy and influential individuals. Keogh’s included then Minister of Agriculture Patrick Hogan and her father Joseph. Read her full story here.

Wicklow-born Ninette de Valois was choreographer, director and founder of the Royal Ballet. Dame de Valois began life as Edris Stannus on June 6th 1898, at Baltiboys near Blessington, Co Wicklow. The family moved to Kent when Edris was seven but, as was noted in the introduction to her Selected Poems, “Ireland, its countryside and its people ... remained intrinsic to her whole being”. She went to the Lila Field Academy for Children, whose alumni included playwrights and actors such as Noël Coward and Micheál MacLiammóir. In 1923 she joined Russian ballet impresario Sergei Diaghilev’s Ballets Russes, which was at the forefront of theatrical dance, music and design. De Valois was determined to have a permanent company with its own base, not a touring one. But the idea of an English ballet struck many people as ludicrous. Ballet, at that point, meant the Russian ballet in all its glamour. Read her full story here.

They’re all Herstories, of Irish women who broke boundaries but whose achievements generally didn’t make the history books.

Their lives features in Herstory, a six-part documentary series starting on RTÉ One from Monday about pioneers in business, politics, science, the arts, aviation and technology

An exhibition called Blazing a Trail: Lives and Legacies of Irish Diaspora Women, an exhibition celebrating the lives and legacies of 21 pioneering Irish diaspora women of the 19th and 20th centuries, at EPIC The Irish Emigration Museum in Dublin.

In an attempt to re-angle history, the multi-pronged project, running from St Brigid’s Day, February 1st to International Women’s Day on March 8th, draws attention to the neglected lives and achievements of compelling women who broke new ground, and whose work changed the lives of others, and sometimes history.

RTÉ Young People’s Programmes has also commissioned six original Irish animations, each telling the story of one inspiring Irish woman. They were nominated by Irish schoolchildren as part of RTÉ’s “Who’s Your Heroine?” campaign last autumn.

The animations remember the lives of Laura Geraldine Lennox, an Irish suffragette from Durrus who was nominated by her grand-niece; scientist and astronaut Dr Norah Patten; daredevil aviator Lilian Bland from Antrim; the founder of modern-day camogie Máire Ní Chinnéide; Mary Elmes, the Cork woman who saved the lives of hundreds of Jewish children during the second World War; and an ode to The Irish Granny.

Kicking off the season, the annual International Herstory Light Festival will light up buildings in towns and cities (in Ireland, Northern Ireland and the world) with portraits of women, including six illustrations commissioned as part of RTÉ’s “Who’s Your Heroine?” project, across Brigid’s weekend (January 31st- February 3rd).

The documentaries were made by Underground Films, partnered with EPIC The Irish Emigration Museum, RTÉ, The BAI and Herstory.