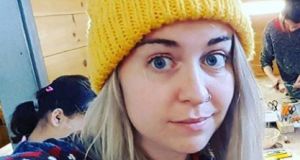 This week, Heather Steacy, originally from Gorey, Co Wexford,  lives in Berlin, where she works as an assistant manager and volunteer coordinator in a refugee centre.

I left Ireland in 2011 after completing my degree in International Development and Food Policy in University College Cork (UCC). I moved to Munich, where I stayed for four years working as an English as a second language (ESL) teacher, and then I moved to Berlin for better job opportunities in the field I had studied. While in Munich I did a distance learning MA with the United Nations University in Sustainable Peace in a Contemporary World.

Living in Berlin is great. It’s generally cheap, however rent is going up all the time and finding an apartment can be very difficult. However, in comparison to Ireland, everything is much cheaper. Generally, Berlin is very open, multicultural and friendly. Summer is a wonderful time of swimming in lakes and beers at the späti (late night shops), however winter can be grey and miserable.

You work with refugees in Berlin. What do you do?

I'm the assistant manager and volunteer coordinator of a refugee centre. That means I'm responsible for supporting the manager in the daily running of the centre, and ensuring that the wellbeing of our residents is being taken care of and the building is being kept in a liveable condition. As volunteer coordinator, I find new volunteers and assist our current volunteers and cooperation partners in the projects that they are facilitating in our centre such as yoga for children, sport for the ladies, grinds or helping with homework or working as mentors for specific families, among many others.

Usually the kids pick up the language very fast, however mothers tend to be left behind as as they have the role of taking care of the children

Where do the refugees in Berlin come from?

The majority come from Syria, Afghanistan, and Iraq, however  many also come from Eritrea, Turkey, Vietnam and Moldova.

Is there a language barrier?

Sometimes there is a language barrier, but speaking both German and English helps. Some of our residents are new in Germany and speak no German or English, but quite often someone in our team speaks the language required.

What challenges are there in Berlin for refugees?

Challenges include the difficulty learning a new language. Usually the kids pick up the language very fast, however mothers tend to be left behind as as they have the role of taking care of the children, and there are not enough German classes for women that include childcare. There is also a lack of kindergarten places in Berlin. Finding a kindergarten place for the children is difficult, meaning some children don’t come in contact with hearing and speaking German regularly until they are five or six years old, which is a disadvantage when starting school. Finding an apartment can be very tricky, due to the current situation in Berlin and at times, due to bigger family sizes. Racism and discrimination are an issue, which I found more obvious in the part of Berlin my previous centre was in.

You have worked with child refugees. What did you do?

I worked in a different centre up until October 2019, where I worked with children of school age. In that centre, all children were with family. I did homework with them every evening, as well as creative activities or games and reading, while also checking in to see how the children were getting on at home and in school. When they had school holidays, I arranged a programme for them with an activity each day - a museum visit, swimming, human rights workshops amd anti-bullying workshops. I worked closely with the parent, schools and social workers if there was an issue with a child.

Is looking after the hearts as well as the minds of refugees important?

Of course. We have a psychologist on site in our centre should anyone need extra support. Otherwise, we try to bring some joy into the centre by offering different activities to bring people inside the centre together and also people from outside the centre. We like to celebrate many different events, be they Christian, Muslim, Yazidin, pagan and more. Food is also a very important way of bringing people together and they can then share an experience together.

The only thing I really miss is friends and family who are in Ireland. Then, food would be a close second - chicken fillet rolls, carvery, sausages, pudding - all the good stuff.

What has working with refugees in Berlin taught you?

I wouldn’t say taught, more so reaffirmed. It has reaffirmed for me that we are all basically the same, no matter where we are from or what culture we are brought up in. The parents of the children in the centre worry, nag and love just like my parents. It also reaffirms that you should treat people how you would want to be treated should you find yourself in a similar situation.

Nigella Lawson: ‘I feel insecure if I don’t know what I’m going to eat’
Real news has value SUBSCRIBE