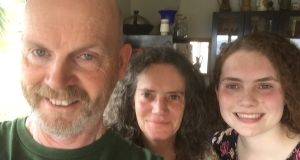 Philip Lynch with his wife Jane and daughter Molly in their home in Tasmania.

I’d hoped that last time would be our last time, and yet, here we are about to break bread with them again. Some friendships seem to age well, while others, are scarcely worth the price of the ticket.

We are waiting at the wait to be seated sign. Nothing untoward will surely happen. We would never row in public. At home, it’s a different story, things can go a little sideways. Often, my wife, daughter and I simply retreat to the comfort of our small screens.

To think that for most of my childhood in Ireland, we did not even have a TV. We existed cheek by jowl. Some of us would even eat our dinner with an open book perched on our laps. Library books, comics and dog-eared paperbacks littered the house.

In this rural part of Tasmania, going out for a meal is a rare event. Hardly anywhere is open after dark. Going out is a reprieve from the domestic humdrum. As we continue to wait, I stare around. A little boy and a girl, they could be siblings, are darting around, enjoying the luxury of the open space. Likely a game of chasey. Just kids being kids. But they aren’t boisterous, there’s no shrieking, and one of the parents is keeping watch, so it should be okay.

This place was once a cannery, during the glory decades of Tasmania’s apple industry. Mainland Australia had its mighty wool clip but Tasmania’s apple production and logging formed the back bone of its economy. Whole families would take to the orchards to help with the harvest. But that world’s long gone now.

For the last few decades, this vast building lay deserted and derelict. Its rotting weatherboards and sagging rusting galvanised roof a pale relic of its former status. But then it was sold, and tradies began arriving in their utes ( utility vehicles) and trailers, and their music; and they have toiled away for the last few years to bring about this stunning transformation.

Ceiling boards have been added but the original trusses and joists have been retained and extra bolts and bracing added, presumably to meet modern building regulations. Floor to ceiling windows are enabling the sunlight to stream in all over the polished Tassie oak floorboards.

After we have been taken to our table, I keep glancing towards the entrance. There has been no last-minute text, so there’s no reason why they won’t turn up. And, sure enough, here they are now, being led in single file directly to our table.

“Oh, it so hot in here,” Esther wails, by way of a greeting, and Noel slides into the seat opposite me. “Why on earth would they have a fire going in this weather?” She scans the room, and stares at a half-open sliding glass door. “And that door’s letting in the hot air. Oh, Noel, what’ll we do?” Noel smiles weakly, but he doesn’t say anything.

I haven’t seen Noel for ages, so we shake hands in a kind of tangible gesture. I will listen to him talk about his work in the city. A senior bureaucrat, he’s always frustrated by the office politics and having to respond to his line manager’s demands. But he’s approaching retirement with a healthy pension to boot, and we will have to find something else to discuss.

“It’s for the pizzas, the fire,” I say, swivelling towards to Esther, trying not to sound prim, trying to summon some humour into my words.

“That doesn’t mean it’s not hot,” Esther snaps. “Can’t they have fans or something?” She is not expecting a reply, and I know that anything I say will be of little or no interest to her. I glance over at my wife but she isn’t interested in any eye contact. That conversation will have to keep for the journey home.

A dozen or so staff, all clad in black, are attending to their tasks in the space between the bar and the wood-fired pizza oven. One of their number, a diminutive smiling woman of about 50, her hair shorn, makes a beeline for our table. She is smiling and her over-sized earrings swing as she strides purposefully. She brings menus and a bottle of water in an old vodka bottle.

“It’s so expensive,” Esther says, as she studies the wine list. “Fifteen bucks for a glass of wine. C’mon, they’ve gotta be kidding.” She doesn’t seem to care that the waitress is within earshot. “We’re using local Tassie wines,’ the waitress says cheerfully, seemingly unabashed as if to explain the pricing, and then she walks away.

“How was Christmas?” my wife asks.

“Oh. Okay, I suppose”, Esther says, as if Christmas is already an afterthought. “We don’t really celebrate it, anyway. It’s all a little pointless. Don’t you think? We were going to go kayaking but it was so windy and it started raining.”

“Sorry to be the bearer of bad news”, my wife says, “but apparently the pizzas aren’t gluten free.”

“Roasted vegetables,” my wife says, slipping in her role of mollifier.

“I guess they’ll have to do. Shall we share a serve, Noel?”

I sit back and reach for my glass of beer. I’ll drink deep, of that I’m sure. The running kids have disappeared but it’s getting hotter, and more people are arriving. There is loud laughter, and the sound of clinking glasses. A trio of musicians is setting up their instruments on a small stage in the corner. So much joie de vie. I stay silent and will our pizzas to materialise.

The musicians start playing and I’m wondering if it’s time we got ourselves a campervan and took off somewhere.

We can take our screens and seek out new places. We could go almost anywhere.

Philip Lynch, a regular contributor to Irish Abroad, is originally from just outside Catlepollard in Co Westmeath and emigrated to Melbourne in 1983. He moved to Cygnet, Tasmania in 2011 where he lives on a bush block with Australian wife Jane and daughter Molly.