A dozen ways to ditch the football 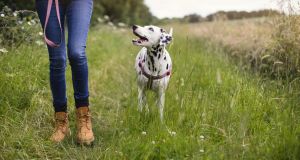 Stroll: Whether you mosey around your local area or tackle a designated route, a walk is a wonderful way to make use of the long summer evening

Households around the country will be on World Cup lockdown at 7pm tonight, as England takes on Croatia in the semi-finals. However for those who don’t know (and don’t want to know) the difference between half time and extra time, the last few weeks have likely been an ordeal. You arrive home filled with the joys of summer to find your kitchen bare, friends unavailable and television out of bounds; work is no better, with multiple sweepstakes and newly crowned pundits making predictions. But suffer no more; we have a list activities to last the length of tonight’s match – even if it goes to extra time or penalties.

The excuse often used for avoiding literary classics is “I just don’t have time”. Well, now you do, and luckily many famous works can be devoured in 90 minutes or less. The Strange Case of Dr Jekyll and Mr Hyde by Robert Louis Stevenson, The Pearl by John Steinbeck and A Christmas Carol by Charles Dickens can all be tackled in under 90 minutes. If you’re seeking something more contemporary, Annie Proulx’s exquisite Brokeback Mountain can also be read before the final whistle.

The World Cup kicks off at 7pm tonight, just as many of us are ready to sit down to our evening meal. Let the football fans chow down on fast food while you dig into some gourmet grub.

Carmel Somers’ Moroccan lamb with almonds and raisins is comfort food with a kick, and easily done before full-time. If it’s a sweet treat you’re craving, Vanessa Greenwood’s Queen of Puddings can be put together in 70 minutes so you’ll have time to polish half of it off before the match ends. If the game goes to extra time and you are still twiddling your thumbs, beat your boredom with Trish Deseine’s 35 minute raspberry sorbet.

Watch a movie or binge on Netflix

With the TV being held hostage by sports fans, now is an ideal time to break out the laptop. Many movies can be watched in around the 90 minutes. For a touch of romance try Richard Linklater’s Before Sunset (80 minutes), to please younger members of the audience Wes Anderson’s Fantastic Mr Fox is a crowd pleaser at 88 minutes, and for horror lovers, Robin Hardy’s The Wicker Man is a classic (we’d opt for the 1973 version and avoid the Nicolas Cage remake if possible). At 100 minutes you’ll finish before the football, taking the half time break into consideration.

On Netflix, cult female wrestling drama Glow has just released its second season. Episodes tend to be between 30-40 minutes, with 10 episodes a season. If England v Croatia goes to extra time, you’ll watch half a series before the action finishes on the pitch. Other favourites to binge on Netflix currently include Brooklyn Nine Nine (you’ll get three episodes in during the match), and Orange is the New Black is a little longer at about 50 minutes an episode, but if the match goes to penalties, you can cram in three episodes.

Go for a walk or a cycle

Whether you mosey around your local area or tackle a designated route, a walk is a wonderful way to make use of the long summer evening, especially as temperatures have cooled today. A scenic route for Dublin city dwellers who want to escape World Cup fever is the walk from Howth Dart station to the station in Sutton. It’ll take you around 2 hours. Just enough time to ignore everything happening on the TV.

If you are lucky enough to live near a greenway cycle path, wipe those cobwebs from your saddle and take to the road. The route from Westport to Mulranny in Co Mayo is beautiful and should take you the length of the match (90 minutes).

Blown blubs, doggy door knobs and peeling paint – there is always something to be fixed around the house. Most DIY jobs can be done in jig time so stop avoiding the film of grease inside your oven and get to work. Some simple DIY ideas include oiling squeaky door hinges, replacing the stuffing in your couch cushions or clearing out your fridge. To make proper use of those 90 minutes, grab some warm water and dishwashing liquid and give it a quick clean. For stubborn stains, have some baking soda to hand.

In a recent Irish Times article, sleep consultant Lucy Wolfe said that the perfect nap should last “probably no more than 90 minutes” which in this instance is ideal. Wolfe also stated that a prime time to start a snooze is between 5pm and 7pm making kick-off the perfect time to start catching up on your beauty sleep.

Although you may be avoiding the World Cup like the plague, you’ve probably had to endure friends and family lamenting their place in the office sweep. So take this 90 (hopefully 140) minute window to pamper yourself. Light some candles, put on a facemask, break out the bath salts and soak in the tub until prune-like.

Listen to an album

When is the last time you listened to an entire album from start to finish? Top picks to drown out the sound of screaming football fans include To Pimp a Butterfly by Kendrick Lamar (78 minutes), Led Zeppelin’s Physical Graffiti (remastered) at around 80 minutes or the Hamilton soundtrack which, at 140 minutes, allows for all match outcomes. Or listen to both Purple Rain by Prince and Taylor Swift’s 1989 album in just over 92 minutes.

After all the fine weather, our gardens are feeling a little sorry for themselves, so take this opportunity to rediscover your green thumb. Plant some herbs for your summer dishes, weed that flower bed, remove dead plants, wash your patio or do some pest management. Just make sure to avoid that garden hose.

If things run into extra time, you could build your own compost bin. You will find step by step guides online, and with a bit of pre-match prep, you should be able to construct your bin before the final whistle.

With the unexpected summer weather, most wardrobes are looking like war zones, as mornings are filled with the frantic panic to find office wear that won’t make you sweat. This neat gap in your schedule gives you ample time to rearrange your wardrobe, fix up a bag for the charity shop and prepare some heat-friendly outfits for the days ahead as the warm temperatures look set to remain past the weekend.

If you’re feeling brave during over time, try tackling the back seat of your car.

Football fans may be couch potatoes tonight, but you don’t have to join them. You could do a hot yoga class – at 90 minutes it’s often hard to find the time to fit one in. Or if you’re at home, the internet is filled with free, easy exercise tutorials, so utilise this time to stretch out those tired limbs. Do a yoga or pilates tutorial, or, considering they tend to last around half an hour why not do both?

Nothing compares to receiving a handwritten note. Whether a thank you card, a complaint to your local county council or a love letter, this activity is both therapeutic and thoughtful. To burn some extra time, try your hand at calligraphy or making a homemade wax seal for the envelope.

What will €200k buy in Dublin and Co Roscommon?
Real news has value SUBSCRIBE