With another Matrix film, maybe we really are living in a simulation

Humans approach much of life in a deluded trance. Hence the jubilation about sequels to mediocre films 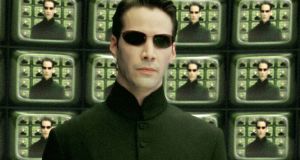 Somewhere out there a scientist is visiting a cruel experiment on blameless baboons. Every time the ape sticks his finger in the hole on the left he gets an electric shock. Biffo may eat his own faeces, but, after a few blasts, even he knows to try a different hole. He may get himself a banana.

I made this up. I haven’t made up the excitement that greeted news that Lana Wachowski and Keanu Reeves are reuniting for a fourth Matrix film. There was near-universal jubilation on social media. Trestle tables were set up beneath bunting on virtual streets and cake was eaten with orange squash. It was like VE Day all over again.

Mention of that celebration calls up a key scene from David Hare’s play Plenty. In the film version, Meryl Streep, a hero of the resistance, looks hopefully over emerald French fields as the war comes to a close. “There will be days and days and days like this,” she says. She ends the film shagging a clapped-out old pal in a seedy boarding house. History should have warned her that the British establishment would reassert its corrupt dominance.

Where was I? Oh, yes. Hope over experience. Has everybody forgotten that 66.6 per cent of The Matrix franchise is terrible? The opening film, released 20 (gulp) years ago, was a sleek masterpiece of dystopian confusion. The intermittent showers of undergraduate metaphysics did nothing to undermine the movie’s perky confidence in its own Kung Fu exuberance. Few fans bother to argue for the two sequels. Spending endless hours rotating up their exhaust pipes, The Matrix Reloaded and The Matrix Revolutions demonstrate the dangers of too-deep immersion in your own fictional universe. Like many sequels to come in new century, they played like high-end exercises in fan fiction.

We have become used to increasingly irrefutable complaints about sequels taking over the multiplex. Yet legions of fans continue to express enthusiasm for new episodes in franchises that are largely dreadful. There follow some figures that I have had verified by several independent watchdogs (my friend Derek and the cat).

Only 40 per cent of the Terminator series is worth coming downstairs to watch. We shouldn’t need to say that the good ones are The Terminator and Terminator 2: Judgement Day. Terminator 3: Rise of the Machines is workmanlike. Terminator Salvation is directed by McG. Terminator Genisys was so unremittingly appalling that one ended up praying for the mechanical annihilation that Sarah Connor strived so hard to avoid. Terminator is largely a bad thing. Yet the upcoming Terminator: Dark Fate has got fans of the paltry good bits hoping for an early Christmas present.

Everyone gets excited when a new Alien film is released. Right? Yet Alien is also a bad thing. Add in the Predator match-ups and the prequel series and you get a Watchability Index of just 25 per cent. Great efforts were made to enjoy Prometheus, but, seven years later, most confess they fared better when seeking sympathetic characteristics in the drunk white-slaver who married their youngest daughter (or something a little less specific). The only thing to say in favour of the Alien Vs Predator diptych is that it compares favourably with the episode that replaced the alien with a Roger Corman swamp-creature in the last reel. Thanks a bunch, Jean-Pierre Jeunet.

Remember the hysteria when a new Star Wars was announced in 2012? The response suggested that half of the episodes had been wiped from collective consciousness. Fifty per cent watchability is a better record than the franchises listed above, but it didn’t bode well for a sunny future (debate rages as to whether that has been achieved).

It should be acknowledged that franchises can be turned around late in the day. Following decades of largely dreadful films, the Rocky series picked up with Rocky Balboa in 2006 and picked up further with Creed in 2015 and Creed II in 2018. Who knows? Maybe Stallone can pull off a similar reinvention when Rambo: Last Blood arrives next month.

Yet there is, in online discussion, little sense that these franchises are largely moribund. The jolly tone suggests that the series – rather than the original film – is something that deserves to be treated with respect.

Unlike the electrocuted baboon, human beings approach much of life in this deluded trance. The human condition – like the Alien franchise – is so grim that we feel compelled to favour hope over experience. To employ an analogy plucked from nowhere in particular, we live in merry delusion as our pale, wasted bodies lie immobile in some colossal machine-driven brain farm. Do you want the red pill or the blue pill? I can’t remember which way round that was, but I’ll take the one that allows me to remember the full direness of The Phantom Menace.

Ben Affleck: ‘It took me a long time to admit that I am an alcoholic’
6