All hail Stan Lee, master of the Marvel Universe 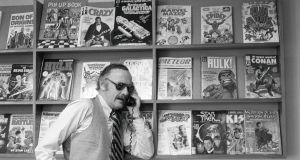 If we have to die then best to do so when – despite your reaching a very great age – the world is dancing to your tune. Stan Lee died in the manner of Charlemagne. The Marvel Cinematic Universe now exerts a hold over popular culture to compare with the Holy Roman Empire’s dominance of Europe in the ninth century. Charlemagne died at 72. Stan Lee made it to 95. So, in one sense, the emperor of comicdom passed away even more successfully than the Frankish giant.

Supreme triumph took a while. Living as a disciple of Marvel in its golden years – the early 1960s to the mid-1970s – was like being part of a subculture that had lost control and leaked into the mainstream. The sense of cult membership was more pronounced if you lived on this side of the Atlantic. Marvel did make sporadic efforts to republish in the United Kingdom. (In 1976, it even launched an initially misconceived title named Captain Britain.) Some versions were reprinted in black and white. Some stories were chopped into smaller bites to accommodate those raised on the three-pagers in Tiger and the Beano. But the real juice was found in the hard-to-find American originals.

Writing in an age when all popular culture of all eras flows in a constant stream from endless conduits, it is difficult to communicate how precious those comics seemed. They appeared erratically and inexplicably as if some mystical cabal controlled their distribution. One stubborn rumour argues that American comics were shipped as ballast in ocean-going vessels. All we knew was that every now and then, with no warning, a stack would appear in the darker reaches of the newsagent. This Spider-Man might date from a whole year earlier. This Luke Cage might have made it here in just a few months. Smell the Americana.

The cultural distance between the United States and western Europe was immeasurably greater than it is today. We revelled at the scarcely believable (borderline fraudulent, it now seems) advertisements for tastes and technologies that belonged on other planets. We gaped at the sheer scale of the Marvel Universe. And we warmed to the cartoon version of Stan Lee, by then publisher of Marvel, that appeared sporadically in his organs.

Reading the American comics in erratic, piecemeal fashion, it was hard to follow the ongoing soap operas

Like Alfred Hitchcock, he developed a persona that helped flog the art. The moustache bushy, the hair extravagant, he spouted an informal patois that you didn’t then get from middle-aged men east of Martha’s Vineyard. The publisher had catchphrases. “’Nuff said” ended any argument. His columns closed with “Excelsior!” We genuflected like liberated civilians accepting “candy bars” and “nylons” from loud-mouthed GIs. Some of the references were lost on us. It took many years for me to understand why Spiro Agnew, the vice-president whose unrelated disgrace preceded that of Richard Nixon, was such a figure of derision to Stan. That obscurity only added to the attraction.

We were also on board with the two innovations that characterised Marvel’s triumph in the 1960s: an embrace of everyday frailty and the creation of a wider universe that accommodated all titles. Reading the American comics in erratic, piecemeal fashion, it was hard to follow the ongoing soap operas, but it remained clear that Peter Parker, alter ego to Spider-Man, had an inner-life not accorded Alf Tupper (working-glass runner in the Victor) or Union Jack Jackson (a British marine in the Hotspur). He had a frail aunt. He had several girlfriends. He was bullied at school and then at the Daily Bugle. “Monsieur Parker, c’est moi,” as Flaubert didn’t quite say.

It was the second innovation that was most useful in gaining Marvel its current dominance. The publishing house accommodated “Team-Ups” in which, say, Spider-Man and Namor the Sub-Mariner would avert that month’s looming Armageddon. Dr Doom was most often an antagonist of The Fantastic Four, but he also had cracks at Black Panther and Iron Man. The heroes gathered together as The Avengers and The Defenders.

It is surprising that Marvel took so long to take over the box office. The two great ambassadors of the competing DC Empire – Batman and Superman – triumphed in earlier franchises, but it was not until 2002 that Sam Raimi’s Spider-Man cracked it for Marvel. Six years later, Jon Favreau’s Iron Man launched the Marvel Cinematic Universe. Episodes of Captain America, Thor and The Avengers followed. Having hauled in more than $15 billion, the series is now the most successful franchise of all time. It helps that the characters are strong. It helps more that – in an era dominated by sequels and spin-offs – they inhabit a fictional universe that looks destined to expand for as long as the actual universe. There will soon be little else but MCU films to see at your local cinema. Even Charlemagne couldn’t have imagined that.