Review: If you love ultraviolent Gerard Butler movies you will probably love this film 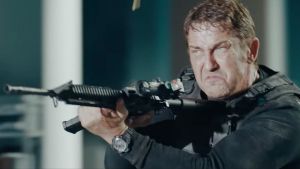 Despite many poor notices, xenophobic underpinnings, and outrageous fear-mongering, the Has Fallen sequence has, to date, grossed more than $376 million worldwide, killing off many way-too-good-for-this-trash character actors (Angela Bassett! Noooo!) along the way.

Following on from the eye-watering Islamophobia of London Has Fallen – which clunked insensitively into multiplexes within months of the 2015 Paris terror attacks – the third film in this unlovely sequence concerns the enemy within rather than pesky armed foreigners. That’s some cause to be cheerful. So too is the appearance of Nick Nolte as a Unabomber-styled hermit. And that, alas, is where the fun ends.

If you haven’t been keeping up to date with the franchise, never fear, expository dialogue befitting a lesser episode of Skippy the Bush Kangaroo will soon get you up to speed.

Bechdel Test? You must be joking, Skip.

The phrase “Never bring a knife to a gunfight” is radically undermined by a sequence that goes from machine gun fight, to pistol duel, to knife fight, to fisticuffs, to homoerotic frenemy moment.

Late 90s John Woo might have been able to make something balletic from a workaday script co-written by the director. Instead we get scrappy post-Bourne framing and often unintelligible shoot-em-ups.