‘It isn’t a cut’: Madigan insists arts funding is on track to double by 2025 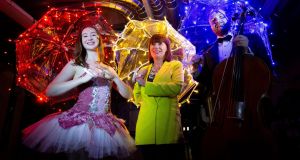 Reasons to celebrate?: Minister for Culture Josepha Madigan launches this year’s Culture Night; the Arts Council is taking on responsibility for the event. Photograph: Tom Honan

Minister for Culture Josepha Madigan is adamant that the Arts Council received an extra €5 million in Budget 2020 this week, despite claims that, as €3.75 million of that is reallocated spending, the real increase is €1.25 million.

She was upbeat at a budget briefing at Government Buildings. “As the Taoiseach said in the Dáil, it is regrettable that we weren’t able to increase it further, but it is an increase. It isn’t a cut. We’re on a good trajectory; we’ve a good road map ahead in terms of doubling the funding by 2025, and we’re committed to doing that.”

When Minister for Finance Paschal Donohoe unveiled the budget, on Tuesday, he allotted €80 million to the Arts Council, the agency that directly funds artists and cultural organisations, up from €75 million last year. Of the €5 million increase, €1.25 million is “to enhance the work of the Arts Council to support performing artists, arts festivals, street arts, family events etc”; the €3.75 million “reallocated” from the department’s spending is for additional responsibilities the council will take on, for Culture Night, for the council’s Creative Schools project and for traditional arts.

When we take into account Brexit, and the difficulties in relation to biodiversity and climate action, the fact that we were able to increase the Arts Council budget is significant

The National Campaign for the Arts was dismayed, saying the €3.75 million had “simply been moved to the Arts Council to be administered to the same organisations”, leaving only the €1.25 million in actual additional funding. The campaign’s chairwoman, Angela Dorgan, wondered how much of it would “make its way directly to artists, musicians, writers, dancers, poets, theatre makers, arts workers and the arts community in general”.

The Minister took issue with its analysis. The Arts Council “is the primary channel of funding artists”, she said at the budget briefing, “but it’s incorrect to say it’s €1.25 million. It is €5 million in new funding going towards the Arts Council, and it will strengthen and expand their breadth and their scope, and will add gravitas to what they’re already doing. They’re very pleased at the fact that they’re receiving, actually... a 7 per cent increase. And when we take into account Brexit, and the difficulties in relation to biodiversity and climate action, the fact that we were able to increase the Arts Council [budget] is significant in itself.” She pointed out that €80 million is the council’s biggest budget “in over a decade”.

The reallocation “actually beefs them up to a certain extent”, the Minister said. The €3.75 million comes with those additional responsibilities, Madigan agreed, but “they’re best placed. At the end of the day they’re going to be supporting artists, and it’s the people on the ground they’re going to be looking after, everything that leads to the work.”

There has also been speculation since the budget that Comhaltas Ceoltóirí Éireann, the nationwide traditional-arts organisation, and its budget were going to be “reallocated” to the Arts Council. If that was the plan, it no longer is. “We don’t envisage at this stage that CCÉ would be transferred to the Arts Council,” the Minister said at the briefing.

On the other hand, she mentioned Culture Night and Creative Schools moving to the council, which she said she thought would be a good fit. The department was still in discussion about details of the reallocations, she said. CCÉ would not get a decrease in funding, but “the precise composition of that reallocation would be in the revised estimates in December”.

The department later confirmed that Comhaltas Ceoltóirí Éireann’s funding for 2019 is €1.6 million. Other traditional arts currently funded by the department receive much smaller amounts, including Siamsa Tíre and the National Folk Theatre of Ireland (€310,000 for 2019), and modest support for traditional arts across various funding streams, such as Scéim na nEalaíon Dúchasacha don Óige, a scheme for young people run by Ealaín na Gaeltachta (€113,000 in 2018).

Research this year by Theatre Forum, the national organisation representing performing arts, into pay and conditions for performing artists showed that a third earn less than the minimum wage – currently €9.80 an hour – and that, besides low pay, working in the performing arts is characterised by poor conditions and precarious employment.

Asked how Budget 2020 would improve things for those working in the arts, given that the council is their main State funder, the Minister stressed the Arts Council’s additional €5 million and said, “If you think about Galway 2020, it’s a significant spend going to that this year. That will also be of assistance to artists. There’s the Percent for Art scheme, and also the social-welfare scheme, which have gone a long way to serve artists.”

There’s no doubt from the Taoiseach’s perspective that we will be in a position, once Brexit has been to some degree solved, by 2025 to double arts funding

Madigan disagreed with the suggestion that the Government was already behind on its target of doubling funding by 2025. (In 2017 Taoiseach Leo Varadkar pledged to double arts funding in seven years, which is, in fact, to say by 2024.)

“There was an assumption it would be front-loaded this year. Because of Brexit, because of all the details we’ve outlined, in terms of climate action, and peatlands restoration, biodiversity, we weren’t in a position to increase the culture sector more. But we still found a way, within our own department, to increase the funding by €5 million.” She pointed out that the Arts Council and many other organisations had welcomed the department’s budget.

“There is an overall increase of €4 million for 2020 in the culture budget; that’s a 2 per cent increase. There’s also the €1.2 million capital plan which is being rolled out, and €460 million for national cultural institutions, so all of it is very positive. And there’s no doubt from the Taoiseach’s perspective, and the Government’s perspective, that we will be in a position, once Brexit has been to some degree solved, by 2025 to double arts funding.”

The National Campaign for the Arts looked for an extra €1.5 million for Culture Ireland to at least maintain and, ideally, increase employment opportunities for Irish artists abroad; this week it lamented that the organisation’s funding was “reduced from €4.6 million to €4.1 million”.

Madigan said that “there’s still substantial funding going to Culture Ireland, and it is extremely important, because it’s a way of showcasing Irish artists around the world. The funding is being maintained – that’s very important – so it’s on an equal footing to what it was last year, and there’s no cuts in relation to any of this. Culture Ireland do a huge amount of good work, and we’re in a position to facilitate many Irish artists going abroad.”

Total funding for arts and culture in 2020 will increase by more than 2 per cent, she said, from €189 million in 2019 to almost €193 million. This will comprise €153 million in current expenditure and €39.7 million in capital investment.