‘We’ll never see a pandemic in our lifetime, or my name isn’t Lord Clarence Imminent-Comeuppance’ 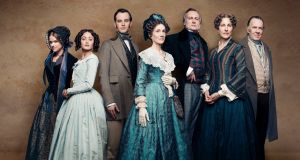 When a woman in the 19th century, which is in the olden days, paraphrases a line written by LP Hartley in the 1950s, which is also the olden days, you know you’re in safe hands historically speaking. “The past, as we have been told many times, is a strange country,” says the woman, contemplating the whole olden-days-ness of it all.

These words are uttered in the opening scene of Belgravia, a new show by Julian Fellowes, the creator of Downton Abbey. (It’s on ITV, which isn’t available to a lot of you, but I still thought it was my duty to tell you about it anyway.) Belgravia contains many common Fellopian tropes. At the heart of it all is an upwardly-mobile merchant family, headed by Mr Trenchard (Philip Glenister) and his wife (the excellent Tamsin Greig), who are mates with the duke of Wellington and are hanging around in Brussels on the eve of Waterloo.

The battle is not, sadly, soundtracked by Abba song Waterloo, though you just know that Fellowes considered doing this, given that the band are also from the olden days

That battle is not, sadly, soundtracked by the song of the same name by Abba, though you just know that Fellowes considered doing this, given that Abba are also from the olden days, thus making their potential presence historically accurate.

Anyway, Fellowes finds the sight of a dowager countess being snooty about forks far more exciting than a mere battle, so the fighting happens offscreen while instead we go to a ball and watch Philip Glenister being mocked for his uncouth, unsophisticated ways while an across-the-class-divides romance simmers between his daughter and a posh aristocrat. The posh aristocrat is wearing the sort of red-coated soldier’s uniform that you just know Boris Johnson wears around the house.

The battle happens. The posh aristocrat dies and up on the screen come the words “26 years later”, at which point we catch up with Glenister and Greig, who look exactly the same. Neither age nor make-up department can wither them. This fact just sits there, unexplained, but I fancy I can hear Fellowes whisper “Imagine they’re older!” so I just go with it.

We visit a fancy tea party at which toffs are impressed by Greig’s middle-class wisdom and a melodramatic plot-driving secret slowly emerges, while a character literally says, “What is this newfangled ‘tea’?”

This is the type of thing people are always saying in Julian Fellowes programmes. His characters are always being confounded by modernity while foreshadowing future events ironically. If it’s 1939, for example, they’ll say, “Well I think that’s certainly the last we’ve heard from this ‘Mr Hitler!’” and if it’s New Year’s Day 2020 they’ll say, “I’ve fired the epidemiologists! We’ll never see a pandemic in our lifetime, or my name isn’t Lord Clarence Imminent-Comeuppance. ‘Cough cough.’”

In the other Fellowes-penned period drama to launch this week, The English Game (Netflix), we witness the tale of a scrappy team of footballing mill workers. Yes, who better to explore the plight of 19th-century factory workers than the peer of the realm Baron Fellowes of West Stafford? (This is his real title.)

The Darwen football team is up against some old Etonians whose tactic is to bulldoze around the pitch in a huddle while wearing nice slacks, much like you and your mates on a night out

I’m going to be honest. As someone who long fantasised about a programme called Downton Soviet, in which a radicalised Bates wears Lord Grantham’s head as a hat, I do not trust Julian Fellowes’s grasp of working-class history or, in this instance, British geography.

I mean, the hero of The English Game is Fergus Suter (Kevin Guthrie), a Scottish footballer from the very non-English Scotland. He and a pal have been lured to the mill town of Darwen by a kindly mill owner (yes, you read that correctly; the industrialist is kindly) who wants to raise the townsfolks’ spirits with competent football, presumably in lieu of better pay and conditions.

The Darwen football team is up against a team of old Etonians whose tactic is to bulldoze around the pitch in a huddle while wearing nice slacks (much like you and your mates on a night out). Suter, at least in Fellowes’s telling, basically invents “passing” and suggests that instead of charging about in a mass, the mill workers engage in social distancing by spreading out and kicking the ball to each other. The toffs are enraged, although Suter and the main toff do have a few meaningful “We’re not so different you and I” moments.

Sadly, in episode two, it turns out that some of the mill workers aren’t content with just having a good football team. They also want to alleviate the grinding poverty in which they live and therefore go on strike. The mill owners cut their wages and the workers yell and growl and grab literal flaming torches and head up to the meanest mill owner’s house, apparently fashioning and burning an effigy of him as they walk. This bit is great fun. “Burn him out! Seize the means of production! Form a workers’ collective!” I shout until it occurs to me that Fellowes intends us to think of this lot as the baddies.

As for the ambitious turncoat who legs it up the hill to warn the mean old mill owner of the happy mob, and the football obsessives who wish to continue playing in the kindly mill owners’ team (basically, strike-breakers), they’re the goodies. Suter, we’re supposed to think, is the one who really has his priorities in order. “Where is everyone? Don’t they know we’ve a cup match tomorrow?” he whinges, while his coworkers are off fighting for justice and being sent to jail.

Such behaviour was once called “class treachery”, and nowadays I believe it’s called “centrism”, but one thing is clear: in Fellowes’s view the correct way to do social progress is to wait until a warm-hearted toff, possibly him, gives you permission. Societal change has nothing to do with rabble-rousing activists or ground-up social movements. No, it’s all about talented poor people proving that they’re worth giving opportunities to and nice rich people who wake up one day and think, “Hey, why don’t we try being marginally less beastly to the povs?” Based on the first few episodes, The English Game is the story of how the British working class sublimated all its revolutionary fervour into football.

In Babylon Berlin the past feels like contested territory, with heroin-addicted detectives, gender-bending cabaret singers, desperate communists and nationalist thugs all vying to shape their own lives

I’m pretty sure Walter Benjamin wrote about this. That doomed philosopher gets a shout-out in the third series of Babylon Berlin (Sky Atlantic), a stylish German period drama that somehow manages to sample the dark glamour of Weimar Berlin while being unrelentingly grim in its depiction of the city’s poverty and growing nationalist brutality.

Unlike Fellowes’s programmes, in which historical developments are signposted by people in fancy dress shouting entire Wikipedia entries across well-polished cutlery, here the past feels like contested territory, with heroin-addicted detectives, impoverished party girls turned ingenious sleuths, sleepwalking liberal politicians, gender-bending cabaret singers, desperate communists, poverty-stricken maids, bipolar industrialists and nationalist thugs all vying to shape their own lives. The future here feels less like a historical certainty and more like an emergent property of the intertwining plots.

The first swastika we see is a flash on a man’s arm in the last episode of the second season, and the only reference to Hitler for most of the new season is a photo on the wall of a young thug’s flat. “Mr Hitler?,” I find myself saying. “I’m sure that’s the last we’ll see of him!”