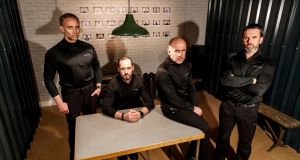 Before writing about Special Forces: Ultimate Hell Week (Monday, RTÉ2), a programme in which regular punters must face the extreme training methods of the Army Ranger wing, let me declare a slight conflict of interest: My dad was actually an officer in the Rangers.

Yes, hereditarily speaking I am a military man, a Ranger by divine right. I know, you can tell just by looking at my byline picture. That’s not a beard on my face but twigs and leaves from an evening spent monitoring my enemies (they know who they are) from a bush in their garden (tidy your garden, you pigs!).

“Why do I not serve?” you ask, because you’re always so patriotic. A fair question. Not to delve too much into my tragic past, but one day in my teens my dad took me aside and suggested that I shouldn’t join the Army, because I was, and I quote, “far too tough. It would be unfair to the other soldiers”.

So it was with a heavy heart I pursued instead the next best thing, a career in arts journalism. And yet, to this day, I have a hankering for the military life and I have even retained an Army nickname because of how tough I am (the nickname is “Daddy’s little soldier”).

Bear that in mind as you read. Picture me watching this programme while being all soldierly, my jaw clenched, one of my muscular arms clutching my blanky, my other muscular arm stopping my cat from scratching the couch while my hand delves into a bag of military-grade Haribo Supermix.

Anyway, I imagine that Special Forces: Ultimate Hell Week originated with a brainstorming session at which an RTÉ exec said, “How can we torment a bunch of millennial snowflakes and get away with it?” and someone else said “Why don’t we make them train for the Army, which, as you know, obeys neither the laws of God nor man?” That’s just how they talk in RTÉ.

And so, 28 large avocado-scented youngsters become embroiled in a sort of extrajudicial rendition which, in the very first episode, involves them being harassed off their bus three kilometres from their destination by grumpy ex-Rangers in Army fatigues.

“Get off the f**king bus,” the grumpy men scream (I think this must also be the training programme they used for Bus Éireann drivers in Kildare when I was a boy).

There’s more. “Get into the f**king river,” the grumpy men scream (which also reminds me of Bus Éireann drivers).

You, patriotic though you are, are the latter kind. The people on this programme are, to a man and woman, the former kind. They all lie face down in a babbling brook. It looks quite pretty, to me, which is exactly the kind of observation that had me pegged as a military man from toddlerhood.

Everything is surprising to these befuddled yet muscly youngsters, even the fact that water is drowny. “We had to stick our heads in the water,” says one recruit. “And I realise, ‘Jesus, I can’t breathe in the water.’”

Yeah, no one said they were looking for biology PhDs. According to one ex-Ranger, what they are actually looking for is “someone who you can put in harm’s way”. This means, I think, that he’s an only child, because isn’t that what siblings are for?

Once they’re all out of the river, the elite commandos get them to take all their clothes off and run up the hill. “Get up the f**king hill,” shouts an Army man. “Stop fluting about here.”

The millennials look shellshocked and confused by all this shouting, though this sort of language was what primary school was like in my day. “Hell week”, my arse. We actually believed in hell. It was a real place you could go to for being slightly informal or for wondering why Yogi Bear wore no trousers. Being told to get up a “f**king hill” and to “stop fluting about” was just called “teaching”.

One ex-Ranger says: “The society we have now, it’s all PC and all that. There’s no PC when you get off that bus.” He’ll be a political candidate by the election in March.

Anyway, the big elite soldiers shout confusing directions. They yell at one recruit for not having cleaning products. They shout at another for having a lavender-scented deodorant. They make them do press-ups or to go on long runs or adopt stress positions. “You’re going to enjoy this run, are you?” shouts one Army man. But the recruit doesn’t enjoy the run at all. It’s a terrible run. It’s nighttime and it’s cold and he has no shoes.

The Army men are assisted in their torture by a Rasputin-like doctor who only intervenes when someone is truly on the threshold of life and death. Classic HSE emergency department, says you.

For a laugh, they get all the recruits in the middle of the night to step from a concrete platform into a dark reservoir 20ft below. Some of these people, understandably enough, are reluctant to do this because of “evolution” and are dispatched back to civilisation where they settle down and have families and work in arts journalism and eat Haribo Supermix.

The others obey and the next day they are rewarded by being awoken at dawn to run down to the sea. “A lovely day beside the seaside isn’t it?” says one of the Army men. But he doesn’t mean that at all. He’s being sarcastic. It’s not a lovely day at the seaside. It’s horrible.

He has the muscular youngsters waterboarded by the freezing tide, then he gets them to run up and down the beach carrying huge logs before rolling down damp sandbanks over and over again. If he’s trying to demonstrate to them that life is but a brutish Sisyphean struggle with no purpose or unifying meaning, he’s succeeding on me and I’m just watching at home. Soon the recruits are vomiting and dazed and at least one of them is hypothermic. The Army men seem to view the latter as a character flaw rather than a medical reality.

“I love what they do, I respect them highly,” says a traumatised young person of his tormentors at one point, in the process evoking the Irish electorate’s co-dependency with centrist politicians. Frankly hypothermia, metaphorical or not, is good enough for them.

Now, I get that all this thoughtless, unquestioning adherence to brutality was necessary in the old-fangled armies of times past, but I feel like we should have moved on. Surely at this stage of the game we should be content with beautiful muscular snowflakes in tailored Army couture who run away crying at the first hint of danger. I know. It’s easy for me to say. I’m very tough.