‘We can’t go back to 1972’: Timely new play explores the personal cost of the Troubles 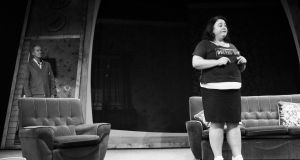 Susan Stanley on stage during Anything Can Happen 1972 at the Playhouse in Derry. Photograph: The Playhouse

At the Playhouse in Derry, the theatre is empty, but the seats are full. On each one is an object – a babygro, a stuffed toy, a photograph – looking up at the stage.

Anything Can Happen 1972: Voices from the Heart of The Troubles opens at the Playhouse on Wednesday night, albeit in a modified form.

The Playhouse had hoped to be the first theatre in the North to welcome back a live audience since the coronavirus pandemic closed venues in March, but that plan had to be cancelled when opening dates were postponed due to rising rates of Covid-19. Social distancing requirements had already reduced capacity at the venue from 150 to 20.

The audience for Anything Can Happen 1972 will now be online instead. But rather than leave the seats empty, writer Damian Gorman and director Kieran Griffiths decided to use them for a complementary performance, Sunlit Absence, inviting people to send items or photographs symbolising their lost loved ones.

Along with the online audience, these objects bear witness to six stories of life during the Troubles in 1972, performed by the people who lived them.

Among them is Susan Stanley from Clara, Co Offaly, whose 16-year-old brother Paddy was one of two teenagers killed when a loyalist bomb exploded in Belturbet, Co Cavan.

Their mother was pregnant with Susan at the time; on stage with her is a simple brown box. “The box is where mammy and daddy put everything belonging to Paddy, all his Mass cards and letters and everything that came in after he died, and it was locked and they used to keep it under their bed . . . my older brothers and sisters came along and picked the lock. That’s how we found out how Paddy was killed.”

The play “means my brother’s name is said aloud. He was forgotten by church and state, which is very sad, so it’s important that whenever I can say his name I say it, proudly.”

On Wednesday night, the performance will be streamed online thanks to the Playhouse’s new “digital theatre”, installed as its response to coronavirus.

“This isn’t just for the length of the pandemic, this is forever,” says Griffiths. “If the National Theatre [in London] can broadcast their work live, why can’t we?”

This may be the future of theatre in the post-Covid world. Although Griffiths describes himself as a positive person, he admits to feeling “scared” about the future, especially if venues remain closed to the public.

High-profile performers including Van Morrison and Snow Patrol have already voiced concerns in this regard, while actor Liam Neeson on Tuesday made his own appeal to the North’s Executive to release £33 million (about €36 million) from the UK government to support those working in the arts.

At the Playhouse, there is a sense much is at stake with the new production. “I feel we have a duty to listen to what happened in our own time,” says Gorman. “There’s a prophetic thing going on . . . they’re teaching us how to listen, not just to them, but to other people who have other stories that don’t come from the same places as our own.”

Stanley agrees. “[The Troubles] didn’t just happen to the North, it happened to our country, and if we don’t sort things now it’s going to happen again.”

The peace process and community relations still have to be “nurtured”, she says. “We can’t go back to 1972, and if we don’t look after everything we’re going to go back there.”

Anything Can Happen 1972: Voices from the Heart of The Troubles runs from September 16th-19th at derryplayhouse.co.uk