Taxi drivers protest in Dublin over lack of financial supports 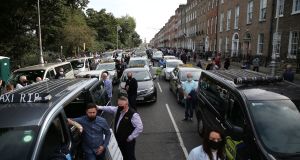 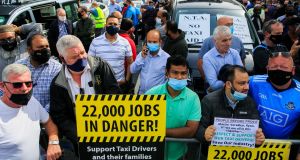 Taxi drivers are seeking a financial package to help them return to work. Photograph: Collins 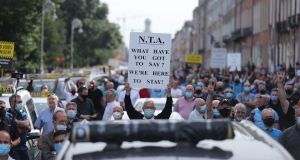 A man holding up a protest sign (centre), amongst taxi drivers, taking part in a protest in Merrion Square, Dublin, calling for greater support for the sector. Photograph: PA

Hundreds of taxi drivers protested in Dublin city centre on Tuesday calling for a range of measures support the industry in response to the Covid-19 pandemic.

Taxi drivers from across the country gathered on Conyngham Road outside the Phoenix Park before travelling in convoy along the quays to Government Buildings.

The protest was organised by the National Private Hire & Taxi Association, the Irish Taxi Drivers Federation, the Taxi Alliance of Ireland and Tiománaí Tacsaí na hÉireann.

Drivers are seeking a financial package to help them return to work, the retention and continued access to bus lanes, a moratorium on the issuing of taxi licences and a two year extension on age limit requirements for vehicles.

Taxi drivers can currently avail of the Government’s Covid-19 Pandemic Unemployment Payment (PUP), which is paid at two rates (€203 per week and €350 per week) depending on a person’s previous income.

They have also said the Taxi Advisory Committee is “not fit for purpose” and want it disbanded and replaced with a national taxi forum.

Joe Herron, president of the Irish Taxi Drivers Federation, said drivers were struggling and financial supports from the Government were urgently needed.

“The amount of work that’s out there for taxi drivers at the moment would be down to about 20 per cent of what they were doing previously.

He said this would fall to around 10 per cent if all of the taxi drivers currently off the road, returned to work.

“ It is an awful situation and it is people, who have in a lot of cases, invested a lot of money in the industry.

“It’s a big blow not having the pubs reopen again [IN DUBLIN]. At the moment with all pubs [which serve food] closing at exactly the same time, it’s not ideal either. It means you might come out for the night and only get one job at 11.30pm and that’s it. By the time you come back there’s nothing left.”

Gerard Macken, chairman of the Taxi Alliance of Ireland, said there had been a number of suicides within the industry in recent months.

“The full extent of what’s happening hasn’t even been recognised yet. The amount of depression within the industry is very bad at the moment. This Government certainly needs to step up. They’ve had five months to do something in relation to it,” he said.

“If nothing is done the industry will be decimated. In a few months, when hopefully the city is vibrant, people will be asking ‘where are the taxis’, ‘how am I going to get home’.”

Jim Waldron, spokesman for the National Private Hire Taxi Association, said a submission was made to the Special Oireachtas Covid-19 Committee in July but that “we have had no positive response”.

Meanwhile, Taoiseach Micheál Martin has told the Dáil that taxi drivers will continue to have access to bus lanes, following the protest by taxi drivers outside Government Buildings.

Mr Martin said both he and Minister for Transport Eamon Ryan had made it clear that “there is no question of taxi drivers not having access to bus lanes” after Mr Ryan initially made the proposal.

The Taoiseach told People Before Profit TD Richard Boyd Barrett and Sinn Féin leader Mary Lou McDonald that the Minister for Transport met taxi representatives last week and will continue to engage with them.

Ms McDonald called on the Government to accept Sinn Féin’s private members motion, which calld for supports including a pause on the issuing of new taxi licenses, reform of the Taxi Advisory Committee, continued access to bus lanes and a temporary two year extension to the rule that requires taxis to be less than 10 years old.

The Taoiseach said the Government was looking at measures to help businesses in particular sectors “in terms of income support above and beyond the pandemic payment”.

‘You feel like you’re trapped in this Leaving Cert . It just keeps going on and on’ 13:41
Woulfe resignation would be unjust and disproportionate, Denham report concludes 13:43
Coronavirus: Derry and Strabane set for further restrictions 13:10
Pharmacist suspended from practising over risk to public health and safety 12:49
Gardaí seize €4 million in cash from organised crime group 12:38