Unthinkable: ‘Effective altruism’ seeks to do the most good with limited resources 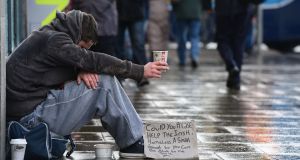 The homelessness crisis creates a moral dilemma for anyone passing through an Irish city each day. When asked for some change, do you give it? Or do you stick to the line that it’s more effective to support organisations than individuals?

There has been a proliferation of informal soup kitchens offering meals on the streets but concerns have been expressed that such direct action deters some rough sleepers from engaging with State services. What’s the best thing to do?

Effective altruism purports to offer a solution. It has been around for some time now – conceived of as part guiding philosophy and part toolbox for maximising the impact of good works. It is commonly associated with utilitarian thinkers – those who judge morality by measurable results – but Seán O’Neill Mcpartlin says effective altruism is compatible with multiple religious and secular views.

A scholar of TCD and final-year philosophy undergrad, O’Neill Mcpartlin is head of Effective Altruism Ireland, what he describes as a “a rather small but highly involved group” that includes traders, economists, philosophers and political scientists.

To further their aim of raising awareness about the concept, they have organised a series of talks at Trinity College Dublin, drawing on the work of philosophers such as Peter Singer, and the practical example of non-profits such as GiveWell, which analyses the impact of different charitable causes to maximise the impact of donors.

What is effective altruism?

“Effective altruism is about doing the most good that we can . . . [It] is the serious concern for the use of evidence and careful reasoning to work out how to maximise how much good can be done with a certain set of resources.

“Effective altruism is not just about charities and donations; many people take the fact that the future might be vast to count in favour of interventions designed to shape the far future . . . Part of how to do the most good, then, might take the form of preventing existential – or extinction – risks.”

How do you measure good works?

“Many charities pride themselves on low overheads, while nevertheless neglecting factors that are arguably more important.

“One fairly obvious factor is the importance of the cause area that a charity seeks to address. I might be extremely effective at making sure everyone has enough hats, but it doesn’t really matter in and of itself how many hats people have.

“Another thing that makes addressing one cause rather than another ‘effective’ is how neglected that cause is. There is no shortage of money going towards decreasing the instance of male-pattern baldness, while many think there is comparative neglect in the funding for, say, our preparedness for an international pandemic. The Spanish flu killed tens of millions of people, and premature balding has not, as far as I am aware, killed anyone.

“Finally, and importantly, is how tractable a problem area is, ie what can be done? If the Ancient Greeks were right, and many of our problems come from vindictive and often spiteful gods, then these problems would not be very tractable.

“Many of the problems that face us may seem intractable, such as global poverty, the possibility of an asteroid impact, or the plight of the billions of factory-farmed animals who suffer daily. The lesson of effective altruism is that, in many ways, these realities can be made better.”

Is effective altruism a comprehensive philosophy?

“No, it does not require any substantive view about questions such as ‘what makes one outcome better than another?’, ‘what makes an action right?’. It is, however, incompatible with some philosophical views – views that do not care about outcomes at all.”

A charge against the effective altruism movement is that it only values what is measurable. How do you respond to that criticism?

“It is, of course, true that many of the most important things in life are not strictly measurable. I do not know how to measure the importance of literature, nevertheless it seems to me important.

“Or even stronger still, some highly respected academics have suggested that we should be concerned with revolution, and to the extent that we are not, we are not ‘doing the most good’.

“It is not true that effective altruists are not involved in what might be called ‘political change’. . . I am rather concerned with the plight of non-human animals, and the scarcity of legal recognition of their interests. This seems to be political . . .

“What effective altruists do is, in a straightforward way, conducive to a utilitarian way of thinking. Nevertheless, to claim either that all people involved are utilitarian, or that in order to be involved you must be a utilitarian, misrepresents the facts.”

A series of free lectures on “Philosophical Issues with Effective Altruism” has been organised with the support of the UK-based Centre for Effective Altruism. The next talk is on Wednesday, February 12th, in Room 5012 Arts Block, TCD, 7pm-8.30pm. Further talks are scheduled for March and April. For more details contact: soneillm@tcd.ie

The UCD Centre for Ethics in Public Life has organised a series of public lectures on moral questions at Newman House, St Stephen’s Green, Dublin. The next talk is by Prof Maeve Cooke on Ethics in the Age of Climate Change on Tuesday, February 11th, at 4pm. More information at ucd.ie