Unthinkable: Roy Baumeister is a long-time critic of the ‘self-esteem movement’ 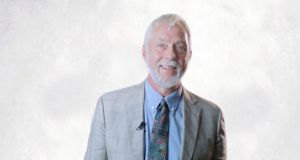 Roy Baumeister: ‘Parents and teachers became reluctant to criticise at all – just praise the child all the time. That’s very poor for learning; it gives you no information’

If you ever have difficulty shaking off a foul mood, Roy Baumeister has some good and bad news for you.

The good news is you’re not alone. For sound evolutionary reasons, humans experience negativity more powerfully than positivity. Brooding for hours over a bit of inconsideration on your partner’s behalf may seem like an overreaction – but it’s part of nature’s way of protecting you from harm in the long run.

The bad news is it takes quite a lot to reverse the effects of a negative episode.

Baumeister and other psychologists have measured it and have identified the Rule of Four: It takes four good things to overcome one bad thing. So you’ll need a clutch of pleasant encounters with strangers to cancel out the impact of a single jerk who cut in front of you in the line.

An American social psychologist best known for his research on self-control, Baumeister has distilled his thinking on negativity into The Power of Bad: And How to Overcome It (Allen Lane). For the new book, he has teamed up again with New York Times science writer John Tierney, with whom he collaborated on their 2011 bestseller Willpower.

As with that publication, which made famous the marshmallow test – an experiment on self-discipline involving children and sweets, The Power of Bad effortlessly synthesises a wealth of academic studies and identifies several practical tools for thinking smarter.

Baumeister has been a harsh critic of the “self-esteem movement”, describing it as “one of the sorrier mistakes in the history of psychology”. While it has been discredited by researchers, he says, many parents and teachers cling to a philosophy of praise and affirmation.

“Failing feels bad but provides more information than success,” he points out. Controversially, he insists that punishments are more effective than rewards. “We’re not suggesting a full restoration of Victorian practices – it’s a very good thing that beatings are no longer routine – but we do advocate less carrot and more stick.”

Why do bad things have a much bigger psychological impact on us than good?

“I think we go back to evolution for this because it is such a universal and basic pattern. In evolution, it’s much more important to avoid negative things. We say, ‘Life has to win every day – death has to win only once.’ So if you miss out on an opportunity for something good, well, that’s unfortunate but you’ll probably have more. But if you miss out a danger – that one mistake could be the death of you.”

You say denying a child a dessert or imposing a time-out “will have a more lasting impact than giving them an extra treat”. How should an educator act on that?

“You learn faster from punishment than from reward, but you learn best if you get both.

“I think because of the self-esteem movement maybe parents and teachers became reluctant to criticise at all – just praise the child all the time. That’s very poor for learning; it gives you no information. Even if you are careful to only praise the good things, the student doesn’t learn as fast as when there is criticism.

“Severe punishments do sometimes produce resentments or other negative reactions. So those can be a problem. But just in terms of learning punishment is very important and helpful.”

But does that contradict other research? You quote clinical psychologist Robert Schwartz who said people achieve “optimal functioning” when they have four positive feelings for every negative one. Creating extra negative feelings will surely tip the scales.

“Well, I don’t think the optimal thing for functioning is to feel good no matter what you do. If you feel good when you succeed and you feel bad when you fail, then, when things are going well, you’ll feel good and that’ll be a sign. But feeling good a lot of the time is a result of doing well – not so much a cause of doing it.

“Feeling good about yourself when you’re not doing well can be counterproductive. Nature gave us bad feelings for a reason. They help us learn. They alert us to dangers and problems.”

In the book, you also highlight our negativity bias, which is prominent in public discourse. Granted, data shows societies have made material progress, but how does that reduce anxiety about potentially catastrophic events like nuclear war or climate breakdown? One of these bad things can’t be undone with four good things.

“Yes, but the danger of nuclear war has really reduced substantially. I spent the first half of my life thinking the world’s going to end in a nuclear war . . . and yet now I do not think so.

“[Climate change] is a legitimate concern. I think John, my co-author, is more optimistic about the climate than I am. But I notice the media are always emphasising the worst-case scenarios. There was something in the newspapers just last week reprinting a prediction from 2004 that by this year, 2020, several major European cities would be underwater, and that there would be global shortages of resources, leading to wars starting up in all parts of the world. Well, if that’s going to happen this year there’s no sign of it yet.

“I think it’s unfortunate the environmental movement has lost credibility by predicting disaster over and over again, which has never yet materialised.”

Finally, just to ask you about the famed marshmallow test and research you’ve promoted linking a child’s willpower to their success in later life. Do we need to re-evaluate this correlation after a 2018 study failed to replicate the findings?

“It’s always unfortunate when a replication is done and it doesn’t work out with the same result as the original, but I don’t think we should overestimate those . . . It wasn’t just in one laboratory it [the link] was found. It was found in multiple places with different researchers.

“We have plenty of evidence from other kinds of sources confirming the importance of self-control and self-discipline. In psychology I think we get most confidence when different methods converge and produce the same conclusion.”

Does technology result in progress?
Stanislaw Jerzy Lec replies: “Is it progress if a cannibal uses a knife and fork?”