Weekend TV guide: 7 of the best shows to watch

Blindboy and The Script on Late Late, plus Vogue and Spencer tell all on Ray D’Arcy, return of The Team on More4, and Philip Pullman’s epic His Dark Materials on BBC1 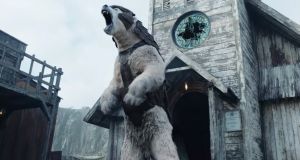 Iorek Byrnison, the armored bear, in His Dark Materials, Sunday on BBC1 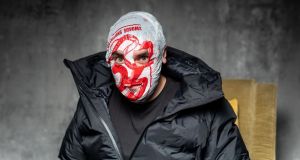 The Late Late Show
Friday, RTÉ One, 9.35pm
Danny O’Donoghue, Mark Sheehan and Glen Power of The Script will join Ryan Tubridy to describe a turbulent year, their upcoming album, and the secret to the band’s longevity in the music industry. The Script will also be performi their latest single, The Last Time. Also: Blindboy Boatclub, voice of a generation, comedian, satirist and popular podcaster will discuss, among other things, why we should fear technology and modern-day addictions to consumerism. Blindboy will also chat about the thinking and inspirations behind his forthcoming short story collection, Boulevard Wren & Other Stories. Plus: veteran Dublin-born Hollywood star Fionnula Flanagan on her prolific career; Irish hospitality stalwart Francis Brennan on not slowing down after reaching retirement age; three Irish women battling cancer on their unique experiences since being diagnosed, the importance of regular health checks, and the challenges of motherhood while seriously ill; and music from The Three Amigos, who will perform Hand Me Down My Bible, written by Phil Coulter and made famous by The Dubliners.

In the 1960s Julie Andrews became an international superstar thanks to Mary Poppins and The Sound of Music, and has spent decades in front of (and behind) the camera with credits ranging from 10 to Victor/Victoria and Shrek 2. Now the Oscar winner is taking stock of her life in Home Work: A Memoir of My Hollywood Years, a follow-up to her critically acclaimed memoir, Home. Also appearing are Reese Witherspoon and Jennifer Aniston, both starring in Apple’s new streaming series The Morning Show; Ian McKellen, who is playing a conman opposite Helen Mirren in The Good Liar; and music from Dua Lipa.

The return of the European crime thriller (a coproduction involving Switzerland, Austria, Germany, Belgium and Denmark) about an international team of detectives. Seven people are murdered during a shootout at a Danish B&B, and the only survivor is a young Syrian woman who escapes into the surrounding marshland. The victims include illegal migrants who had gone into hiding there. Inspector Nelly Winther from Denmark, Hamburg investigator Gregor Weiss, and Belgian secret service officer Paula Liekens all spring into action after the killings. Could the B&B’s German owner be responsible for the bloodbath?

Vogue Williams and Spencer Matthews join Ray to talk about their recent wedding party, son Theodore, trips to Ireland, those pregnancy rumours and the new series of their reality TV show, Spencer, Vogue and Wedding Two. Also: Iconic 1980s TV presenter Anneka Rice talks about finding fame on Treasure Hunt and Challenge Anneka and how she found herself back in the limelight on this season’s Strictly Come Dancing. Plus: Cork entrepreneur Pat Phelan on turning himself around after his battle with alcoholism and his new venture into the world of cosmetic clinics; and Alopecia sufferer Michela Moloney on her goal to raise money for the charities that helped her after she lost her baby girl Poppy at birth. Moloney wants to shave her head for these charities live on air.

Scott & Shackleton’s Antarctic Adventure: The Discovery
Saturday, Channel 5, 8.30pm
Rob Bell looks at the RRS Discovery, a barque-rigged auxiliary steamship that was the last traditional wooden three-masted ship built in the UK. Designed specifically for Antarctic research and launched in 1901, the Discovery was ordered to the British National Antarctic Expedition, carrying Robert Falcon Scott and Ernest Shackleton on their highly successful journey to the Antarctic.

His Dark Materials
Sunday, BBC One, 8pm
Philip Pullman’s acclaimed fantasy trilogy faltered on its big screen outing, but maybe, just maybe, it will fare better in this small-screen adaptation, written by Jack Thorne, who already has form with Skins, This Is England and National Treasure. The 2007 film, The Golden Compass, an adaptation of Northern Lights, was hit by poor box office and a backlash from religious groups. Pullman writes from an atheist perspective, so showing this series on a Sunday might get some people’s backs up, but for fans of epic fantasy, this should be just the job. His Dark Materials is set in a world where everyone’s soul takes the form of an animal, known as a daemon, and the mysterious Magisterium rules all. A young girl, Lyra (Dafne Keen), is sent to Oxford by her uncle, Lord Asriel (James McEvoy) to study among the scholars, but when she falls in with the charismatic Mrs Coulter (Ruth Wilson) she embarks on a perilous quest, and is soon taken under the wing of aeronaut Lee Scoresby (Lin-Manuel Miranda). Is Lyra the chosen one to break the power of the Magisterium? That would be an ecumenical matter. (Following at 9pm on BBC4 is Philip Pullman – Imagine, in which Alan Yentob spends time with the author in Oxford.)

TV might be overrun with cooking shows, but this is one of the best on the box. What John Torode doesn’t know about rustling up tasty treats isn’t worth knowing, while Lisa Faulkner is also bursting with ideas for mouthwatering creations. Series three kicks off with tastes of Thailand, Japan and India in the form of dishes perfect for breakfast, lunch and dinner. The duo create recipes that pack a punch, including traditional kedgeree, veggie katsu curry, spiced lamb cutlets with potatoes, and a coconut and mango rice pudding.

Fairy forts: Why these ‘sacred places’ deserve our respect
10