How Europe Stole My Mum: ‘You racist, chardonnay-sozzled old witch’

Review: Inside the divided livingrooms of Britain, the stark choice to Leave or Remain seems to extend to family members 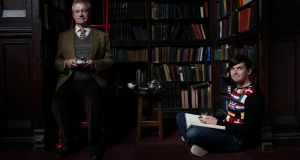 Harry Enfield and Kieran Hodgson in How Europe Stole My Mum. Photograph: Channel 4

In a quick recap of his young life so far, the comedian Kieran Hodgson recalls an early talent for mimicry, his frictionless coming out story, and bringing his future husband home to visit, all under the approving eye of his warm, encouraging mum. So when he discovers that they have voted differently in the 2016 Brexit referendum, it shouldn’t change anything in their relationship, should it?

“You piece of sh*t, mum,” he seethes at his Leaver progenitor. “You racist, chardonnay-sozzled old witch!”

His mother (gamely played by Liza Tarbuck) doesn’t bat an eye. “Well, I should have expected this from a nasty, snobbish, stuck up, traitorous, IPA-guzzling disappointment of a son like you!”

Welcome to How Europe Stole My Mum (Channel 4, Thursday, 11.05pm) and the divided livingrooms of Britain, where the stark choice to Leave or Remain seems to extend even to family members, muddling along for the sake of old alignments or rashly considering going it alone.

Hodgson’s show, rather sweetly, is gently hell-bent on personal reunification, revisiting the UK’s history with Europe from a variety of political perspectives in the hope that both sides of the debate might be represented as something other than demonic cartoons.

Developed from his Edinburgh Fringe stage show ’75, which revisited Britain’s earlier divisive European referendum by having Hodgson impersonate politicians of the day, it leaves a curious impression itself. Hodgson spends most of the time in his library, where a musty Harry Enfield patrols as a borderline-sleazy librarian, heavy-breathing introductions to Harold McMillan and Charles de Gaulle, Barbara Castle and Tony Benn, and the epic story of Britain’s journey into the EU, or “Brentry”, often ensconced in film and TV parodies.

If you begin to find this all fatiguing, you are not alone. “I think I’m going to have to take a break from this whole British-European politico-diplomatic history investigation mother-son-reconciliation quest thing,” Hodgson sighs, roused from a dream.

But with the show broadcast on the most recent blown deadline of Britain’s departure, that tortuous history is not taking a break from him, or anybody, anytime soon. In the end, Hodgson is forced to be glib, advising his audience to “just imagine living with someone who thinks differently to us”. With the UK now poised for the third general election in five years, and the exhausting endgame of Brexit looks to its dismal aftermath, it’s hard to imagine when the healing will begin.