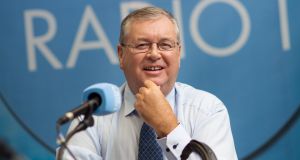 As Halloween looms, scary stuff is everywhere, from horror movies and fright masks to the dental apocalypse of sugary trick-or-treat hauls. But for those looking to be really terrified, it’s hard to beat Liveline (RTÉ Radio 1, weekdays). Not a show for the fainthearted at the best of times, Joe Duffy’s programme carries a particularly chilling item on Tuesday, all the more unsettling for its everyday setting.

Duffy initially hears from south inner-city Dublin resident Mohammed, who recounts seeing two men on his street point a gun at a passing tourist and steal the contents of her handbag, all in broad daylight. The woman wasn’t held up on some deserted alleyway – there were other people around, with two others robbed at the same time. Despite the many witnesses, the armed man made no attempt to hide his face, before walking off calmly with his accomplice.

Duffy corroborates and expands on these details, referring to a video of the incident going viral while he’s on air. But while the presenter plays an audio clip of the unfortunate woman screaming in terror, he voices frustration that he can’t share the video on the Liveline’s online platforms. “We’re not allowed to identify him, because it might upset him,” Duffy sarcastically remarks, adding archly, “It might violate his rights.”

It soon becomes clear this isn’t an isolated incident. Veteran homelessness campaigner Alice Leahy, who lives in the area, isn’t surprised. She lists the societal ills she encounters, from verbal abuse and lack of respect for age or authority to “kids with guns”. “I’m not an alarmist, but society has completely broken down,” she says, alarmingly. Independent Dublin city councillor Mannix Flynn concurs. “That’s a regular occurrence on our streets,” he says, ascribing the situation to a single factor: “There’s no consequences for these individuals.”

Perhaps it’s the brazenness of this particular crime, its casual cruelty or the simple fact that it’s caught on video, but for whatever reason, it strikes a chord. Over the next two days, Duffy is inundated with similar tales. Alex recalls having a gun pulled on him by a passing youth with “an evil smirk”. Others recount the less lethal but still hazardous seasonal pastime of youths randomly throwing bangers at passersby.

Some callers attempt to place the hold-up in a wider context, with local resident Joy pointing to the social deprivation in inner city Dublin. Duffy, however, is having none of it: “My patience isn’t available today.” When Joy tries to reiterate her point, the presenter cuts her off. “Poverty doesn’t justify crime,” Duffy says angrily, stunning his caller into silence. It’s rare to hear Duffy so aggrieved, but it’s a revealing moment, underlining the impact of gun incident on the presenter as well as his audience.

The whole affair shows off the strengths and weaknesses of Liveline. Without Duffy’s intervention, the nightmarish incident might have gone unnoticed by the wider public. Leahy, for one, applauds Duffy for highlighting the blight of urban crime. But while many callers testify the dire state of some areas in Dublin, there’s little consensus or even discussion about possible solutions. Instead, the atmosphere is one of helpless disenchantment in the face of urban dystopia.

Still, some black comedy can be found amidst the grimness. Marian tells Duffy about “tall smelly fella” putting a gun to her head during an attempted post office robbery, only for the postmistress to claim the gun was fake. “She didn’t give a sugar if I was shot,” says Marian, in perverse admiration. Duffy is more interested about what a gun to the temple feels like. “It would frighten the s*** out of you,” comes the unvarnished reply. With scary stories like that, who needs Halloween?

Further harbingers of the collapse of civilisation as we know it can be heard on the Ryan Tubridy Show (RTÉ Radio 1, weekdays), as social media star Kim Kardashian is held up as the exemplary role model of our time. On Monday, Tubridy interviews author and “celebrity branding” expert Jeetendr Sehdev, who claims that figures such as Kardashian “aren’t just celebrity flotsam” (as Tubridy puts it), but rather “redefine what it means to be talented”.

This might seem like a generous description of a woman whose fame mainly rests on Twitter posts and reality shows. But Sehdev insists that Kardashian and YouTube stars like PewDiePie have trailblazed “a new way of living”, showing how “we can commoditise ourselves”. “Before you could only be talented if you played the violin or went to drama school,” he says. “Now, guess what, taking a selfie is a talent.” Tubridy laughs ruefully at this, thus saving listeners the bother of having to do so themselves.

Given Tubridy’s oft-professed wariness toward the Hobbesian world of social media, it seems odd to hear him hosting views so antithetical to his own. But while the presenter is occasionally wont to voice exasperation at modern mores, he is open to hearing other voices. (When he talks elsewhere about talking to homeless people he encounters, it seems less humblebrag than genuine curiosity.) Moreover, he appears to take other views on board: he makes far fewer mocking asides about “snowflakes” than before, for example.

That’s not to say Tubridy sets aside his scepticism. He wonders whether social media fame is “vacuous” and sounds dubious about the skillset required for selfies: “Is it depressing to think that’s a talent?” But he allows his guest the space to air his thesis, and while Tubridy doesn’t sound entirely convinced by the arguments, he follows his natural instinct for common ground by sharing Sehdev’s faith in the “savvy” of the younger generation.

In the end, despite differing opinions, it’s a friendly, intriguing and ultimately optimistic encounter. Maybe things haven’t totally gone to hell in a handcart just yet.

The controversy over Fianna Fáil TDs getting other deputies to vote in their absence is teacup-sized compared to the country’s other problems, but it led to some arresting radio. Amidst the hypnotic mantra about “pressing the buttons” running through reports on the story, the trademark tenacity of Mary Wilson on Drivetime (RTÉ Radio 1, weekdays) stands out.

Wilson’s interview with Fianna Fáil TD Stephen Donnelly moves from the troubled construction of the children’s hospital to a comprehensive grilling on whether he has asked others to vote in his place. He has, he says, though only when he is already in the Dáil chamber but not beside the by-now famous voting button. That Wilson spends as much time on this matter is entertaining, but it’s buttons compared to the genuine scandal of the hospital’s multi-billion overspend.