A new TV adaptation of the classic novel stars Olivia Cooke as one of fiction’s greatest female characters, Becky Sharp, and the production strives to be as daring as its protagonist 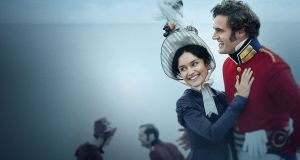 We’ve had excellent female characters since the days of Chaucer, but these days it’s on the up. There’s the good (Jodie Whittaker as Doctor Who), the bad (Seána Kerslake’s Aisling in Can’t Cope Won’t Cope) and a bit of both (Kristen Bell as Eleanor in The Good Place), and new to our screens is Becky Sharp in Vanity Fair, possibly one of the boldest anti-heroes in classic literature.

Based on the 1847 serialised novel from William Makepeace Thackeray, the Amazon and ITV period drama tells the story of a group of well-to-do young adults in the midst of the Napoleonic Wars, where “everyone is striving for what is not worth having”, as the characterised version of its author, played by Michael Palin, reminds us at the start of each episode. It centres around poor but savvy Becky Sharp (Olivia Cooke), whose naked ambition for wealth defines her relationship with her friend Amelia (Claudie Jessie) and her many admirers.

Curiously, as much time elapsed in the 19th century between Jane Austen’s release of Pride and Prejudice and the publishing of Vanity Fair, as between the former’s 1995 BBC adaptation – arguably the definitive period drama – and this Amazon/ITV one. If we thought Elizabeth Bennett’s wilfulness made for some gripping plot twists, Becky Sharp took it to another level back in the 19th century, and she does so again now.

Those who caught its first episode on Sunday night (the second is on Monday night) can attest to Becky’s cunning. At a recent launch event, 24-year-old actor Olivia Cooke, also known for Bates Motel and Me, Earl and the Dying Girl, explains her character’s appeal.

“The show is not stuffy, it doesn’t hold the audience at arm’s length,” she says. “And Becky is not wallowing over a lost love. She goes completely above her station, class and gender, and at that time it was completely unheard-of.

“She’s weaponised all her talents, and uses them just to survive. Because she’s only got herself to rely on, she doesn’t have the option to fade into the background or to marry poor. She has to strive for the best and there’s no other way.

“I had the most amazing time playing her. She was so imperfect and she exaggerates her flaws. She’s not a heroine, she’s the opposite of that, and she doesn’t try to be anything else. She’s blinkered in her quest to be comfortable, but it’s never enough – all the characters in Thackeray’s work are deeply unsatisfied.”

Manchester-born Cooke took on the role shortly before her current Hollywood fame took off. You might also recognise her as Art3mis in Steven Spielberg’s Ready Player One, one of the biggest hits of the year both at home and abroad.

“As an actor you want to have as diverse roles as possible, and the challenge is I’ve never played anyone like Becky before,” she says. “I had the most amazing time playing her – she’s mischievous, she’s naughty, she’s cheeky. It’s funny how, as an actor, I turned certain dials up within myself to live in this mode of debauchery for six months.”

She’s joined by an ensemble cast in this adaptation, who take both major and minor roles: Michael Palin, Martin Clunes, Suranne Jones, Claire Skinner and Johnny Flynn. In what could be a dense adaptation of a weighty tome – a likely outcome when a 318,000-word book is crammed into seven one-hour episodes – each character is given space to become nuanced and show both positive and negative sides of their personality. It’s almost a period drama version of Arrested Development, with each character the centre of their own world pursuing what it is they think will make them happy, though often at the expense of empathy.

With such true-to-life characters, it’s only right that the tone of the show follows suit. The creative team have replaced the stiff-upper-lip nature of period dramas with something a little more casual. “News from a friend who is flourishing? Always so annoying,” needles Martha Crawley (played by a scene-stealing Sian Clifford), as Becky reads a letter. There are knowing glances to the camera, and the theme tune is a lusty, late-night version of All Along the Watchtower – only with the lyric “There must be some kinda way outta here” fittingly brought to the fore.

These small but significant details were at the behest of series director James Strong, best known for Broadchurch and Doctor Who.

“Becky is a maverick and she breaks the rules,” he says. “I like idea that breaking the fourth wall every now and then makes you more on Becky’s side. For the whole thing, we were trying to bring a modernity to this version and make it feel like a period drama for people who don’t like period dramas. We were trying to do that in all aspects of the production, from the performances to the way we shot it. It felt like a place where we could put in music that felt contemporary and expressed the attitude we wanted to get across. From the start we wanted to grab them and say, no, it’s totally different.”

When it comes to modernising historical stories, most producers have a hard time grappling with the race issue (notable exceptions include the film Victoria & Abdul, and William Oldroyd’s Lady Macbeth). And it’s true here. In the first episode, viewers may have spotted the awkward scene in which Amelia’s father Mr Sedley comments on the prospect of Becky marrying his son: “This little friend of Amelia’s is a white face at any rate. Better than sending him back to India, into the arms of some dusky maharani. Better than a dozen mahogany grandchildren.” he says to his wife – in earshot of their black servant.

But writer Gwyneth Hughes is quick to explain that it was key to leave these jarring words to foreshadow Mr Sedley’s old-fashioned views, which become his downfall. The key was to reframe the words from a private thought to his wife to one made in front of their black servant, whose reaction highlights the ugliness of his opinion.

“I wanted to show we were in the middle of a white-dominated costume drama and to invite the audience to step into the black guy’s shoes,” she says. “I am really proud of that scene – to take it out would have been cowardly.”

“Thackeray was a man of his time,” adds Michael Palin. “It’s an attitude of the time, which does shock.”

For his own part, Michael Palin’s brief cameos in each episode – recapping the previous episode and foretelling that instalment’s action – was a plum role. Almost 40 years ago, he picked the book as his favourite on Desert Island Discs.

“It’s such a wonderful book on so many levels. I felt enormously pleased to be invited,” he says. “I thought it was interesting that I was asked to play Thackeray. He very much sees the characters as his puppets. I’m not going to tell you what happens, but he has a proprietal view of the characters, yet lets them do exactly what they want to do, so it’s an interesting combination.”

The next five weeks will unravel whether they fail, succeed or should have been more careful what they wished for. But, as the great Michael Palin suggests, for those who haven’t read the book, we’ll keep schtum.

Vanity Fair continues on UTV on Monday night at 9pm