Tommy Tiernan: ‘I love going to Mass. It’s all about the losers’ 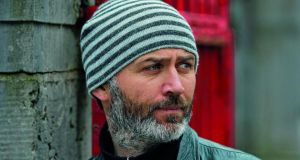 Tommy Tiernan: “I wouldn’t be surprised if I came to consciousness in three minutes’ time in a carpet factory in Navan, with some foreman shouting ‘Cop on Tiernan! Stop daydreaming!’”

If you were wondering how Tommy Tiernan prepares for gigs – a spot of shadow-boxing, perhaps; maybe screaming into a bag for half an hour, or listening to speed-metal at full volume – you may be a little disappointed by the reality. The comedian wanders into the dressing room at Vicar Street , pre-packed salad in hand and heads straight for the kettle.

“I’ll tell you what it is,” he says, brandishing a much-needed cup of tea after a long drive from his home in Galway. “I was listening to Anthony Hopkins, and he was talking about Muhammad Ali and Marlon Brando – and what made them both so effective was that when they were on camera, or fighting, they were entirely relaxed. So it’s trying to achieve that complete physical relaxation, but keeping a mental sharpness; sometimes it’s meditation; sometimes it’s being surrounded by people. And my soundman gave me some great advice – he said ‘All you can do is prepare, and then abandon any expectation’.”

Tiernan has forged his reputation as one of Ireland’s best-known comedians via his high-energy, off-the-cuff, ‘anything goes’ approach to the art form, so this philosophical outlook is a little unexpected. On the other hand, anyone who has seen his chat show will be aware that he is capable of more than just making people laugh. The first series of The Tommy Tiernan Show – which saw him interview guests who were unknown to him until they walked onto the set – debuted on RTÉ in January. Its varied remit, which saw him straddle jockey AP McCoy and conduct an illuminating, frank discussion on mental health with Prof Brendan Kelly – proved such a hit with audiences that it’ll return for a second season next year.

The show also unearthed a new facet of Tiernan and his skills as an interviewer; after over 25 years in the business, he says, it can become easy to be trapped by “your notion of what other people think of you. Because people don’t really think of you– they’ve other things to be doing,” he laughs. “I remember when Lenny Henry started doing serious theatre, and he did Othello; I was upset that he’d done that, thinking ‘No! Just tell jokes!’ There was a danger that I would transfer that prejudice onto myself, but I’m too . . .” He trails off. “Comedy is hard. Sometimes it takes less effort to be serious.”

In that case, what keeps his passion for comedy alive after over half of his life making a living from being professionally funny?

“I was talking to Ed Sheeran about it – clang,” he jokes, recalling his cameo with pal Hector Ó hEochagáin in Sheeran’s Galway Girl video. ‘We were there in a bar, and we got chatting about performing. And he said to me ‘I just really love making people happy. I love seeing people have a good time.’ I would never phrase it like that, but . . . it’s the adrenalin of it. It’s the attention. It’s the glamour – not of the life, of the spotlight – and yeah. It’s an extraordinary thing to have in your life. Now, I don’t always feel like that – it sometimes turns to pressure, and the pressure outweighs the enjoyment, but you get through those phases. I still love it.”

It helps, he says, that there are new experiences on the horizon. Alongside his ‘Tommy the Comedian’ and ‘Tommy the Chat Show Host’ guises, the newest chapter of his career will see Tiernan return to acting after a long gap. The last prominent role he had was of Fr Kevin, the depressed priest, in Father Ted, but landing parts in Channel 4’s new Troubles-set sitcom Derry Girls, Dave Allen biopic Dave Allen at Peace and the film adaptation of Kevin Barry’s Dark Lies the Island have reignited his passion for the craft.

“I acted for a little while 25 years ago – then I realised that I was useless,” he laughs. “I thought ‘I’m not able to do this’, and then I was kind of swept away by stand-up – but in the past I would have always been looking at actors, thinking ‘How do they do that?’ So about two years ago, I said ‘I’m ready to try acting again’. I was in London and my agent said ‘They’re casting for this thing in Derry’ and I said ‘Okay’ and I got the part. I love being on set, I love the long hours, the early mornings, the camaraderie. I always think that the adventures actors get to go on are fantastic. Just to dress up and hang out in a forest, brilliant. Even though it’s really silly, I feel like it’s a meaningful way to pass the time. I don’t know how it’s meaningful – I’m not working for Médecins Sans Frontières – but it feels like the act of acting has meaning.”

I think Catholicism is actually so counter-cultural to capitalism

With such a busy schedule – and the fact he is touring his stand-up show Under the Influence countrywide until December 23rd – you might think it all leaves little time to get into the Christmas spirit, despite his six children.

“Not really, because I’ll be performing in hotels that’ll be covered in Christmas stuff – so I’ll be having turkey and ham from November until the start of January, don’t worry,” he laughs. “But Christmas is a weird one. We have to be careful that it doesn’t turn into a list of stuff to do. And there is stuff to do – but you just need to be aware of not letting that agenda dominate the event.”

Tiernan is open about his strong faith and speaks about going to Mass regularly – so you would imagine that Mass will factor into his Christmas experience, too.

“I’d probably love to go to Mass every day if I could, actually,” he nods. “It’s funny where you end up. I would consider myself pro-choice and Catholic – so that’s a constant negotiation, between the independence of your mind, the realities of your heart and a man-made organisation [that is]the church. But the experience of being at Mass . . . I don’t know what it is. I don’t know all the prayers, but I love it. It’s a community thing, I think. Probably the Christmas Eve Mass is the one to aim for, where there’s more perfume than incense,” he smiles. “I think Catholicism is actually so counter-cultural to capitalism that it’s great to get relief from that economic narrative. It’s great to go to a place where it’s all about the losers,” he says, laughing loudly. “Capitalism is all about winning and ‘be the best that you can be’. That’s a tiresome mantra. ‘I am legend’ is appropriate if you’re a superhero, but not if you’re a human.”

A household name in his home country, a successful comedian, chat show host and now actor; is he where he thought he’d be in life? Tommy the Philosopher makes a reappearance before he heads off to make 1,000 people laugh for the next hour or two.

“A line came to me just before a show last week, which was ‘We all have fantasy lives’,” he muses, pausing thoughtfully. “We’re all thinking ‘It’d be better if I was doing this, it’d better if I was doing that’ – but I have a feeling that the one I’m living is one of mine. I wouldn’t be surprised if I came to consciousness in three minutes’ time in a carpet factory in Navan, with some foreman shouting ‘Cop on Tiernan! Stop daydreaming!’”

Tommy Tiernan tours Under the Influence countrywide until December 22nd, including Vicar Street, Dublin, on December 1st, 2nd and 3rd