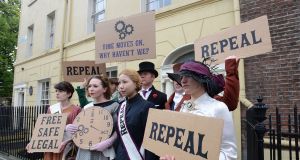 The Abortion Rights Campaign after a press conference in Dublin. Photograph: Dave Meehan

We can expect to see a lot of international television crews reporting from Ireland over the next few months as the country moves towards holding a referendum on the future of the Eighth Amendment.

One of the first of those programmes will be broadcast at 7.30pm on Friday on Channel 4. Unreported World: Ireland’s Big Decision follows Irish-born reporter Shaunagh Connaire as she travels from Waterford to Longford to Dublin to examine the tensions between the two opposing sides as they start preparing for the campaign.

Connaire also talks to medical professionals and patients in the Rotunda Hospital, Dublin about the impact of current laws on their own personal lives and decisions.

It’s a solid, balanced piece of work that gives voice to a range of views on the subject. Connaire meets an old schoolmate, Thomas Reilly, and his wife, Lisa, both of whom are vehemently opposed to repealing the Eighth Amendment because they believe children such as their own daughter, who has a significant disability, would not be born in its absence.

Another parent, Claire Cullen, talks movingly about her experience of being forced to continue her pregnancy – although the foetus’s severe abnormality meant there was no chance of survival – because she could not afford to travel to the UK for a termination. As a result of her experience, Cullen is now a pro-choice activist.

There is footage of tense scenes between protesters and counter-protesters as they face off across a park in Waterford city. And a young teacher canvassing on behalf of Youth Defence explains why she is so strongly opposed to abortion. In fact, the impression the average viewer would get is of a country bitterly divided into two opposing and mutually uncomprehending camps – there is little sense of the shades of grey and complexity that most recent opinion polls indicate exist among voters.

In the Rotunda, foetal medicine midwife Jane Dalrymple counsels parents who have found out their foetus has a condition that means they won’t survive outside the womb. She talks about the traumatic choices they face after a termination in the UK: “Taking their baby home and placing it in their kitchen fridge and ringing the next day and saying ‘What will I do with my baby?’ ”

At less than half an hour long, Ireland’s Big Decision is a solid piece of reportage that lays out for its UK audience some of what is at stake in the upcoming campaign. Irish viewers may be startled by its no-nonsense style – Irish programmes on this subject often feel over-timid in comparison. But they can expect to see a lot more such programmes in the months ahead.

John Boyne: Why I support trans rights but reject the word ‘cis’
4

Normal People nominated for four Emmy Awards in US
8