Ciara Kelly is an assured on-air presence, a GP whose radio career is blossoming 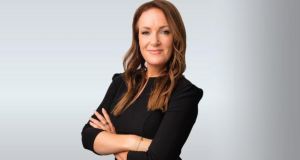 With George Hook gone from his weekday lunchtime slot, there’s a new sheriff in town on High Noon (Newstalk, weekdays) in the form of Ciara Kelly. Not so much a gunslinger as a sawbones, Kelly is also a GP whose erstwhile role as Hook’s resident medical expert has blossomed into a broader radio career.

It’s not hard to hear why. Kelly is an assured on-air presence; she’s well able to handle topics far removed from her original area of expertise and unafraid to leave her personal stamp on items, although without the bluster of her predecessor.

Her discussion on the controversial referendum on Catalan independence with historian Caoimhín De Barra lucidly lays out the issues raised by Spain’s crackdown on the vote while comparing the situation with Ireland’s independence struggles. The host also brings her own experience to bear. She draws on a recent visit to Catalonia to suggest that there is wide support for secession. It’s nicely engaging, the only failing being Kelly’s difficulty in pronouncing “secede”.

When an item falls within Kelly’s medical bailiwick, things get more interesting. Michael Nugent of Atheist Ireland appears on the show advocating the right to die for the terminally ill. He explains how his late wife made preparations to take her life should her suffering become too great, adding that “her quality of life soared” afterwards. “It’s not about the act of dying, it’s about the peace of mind while you’re alive,” Nugent says, while stressing that those who wish to live should receive the best medical care.

But Kelly is dubious, worrying that “the right to die can become the duty to die”. She cites studies to suggest that ill people feel pressured to end their lives prematurely, and frets about the implications of assisted dying on doctors’ oath to “do no harm”.

Her strong feelings on the issue are obvious – she makes her points at such length that Nugent almost seems forgotten – but equally she is alive to the various arguments and sensitive about her guest’s experience. It’s early days, but so far Kelly has proved she can hook listeners.

In the 1970s and 1980s, in an Ireland blighted by recession and the troubles, Mike Murphy offered a rare opportunity to smile. Whether presenting Morning Call on radio or hosting The Live Mike on television, his breezy confidence, smooth delivery and ever-so-slightly racy humour represented both welcome distraction from national woes and aspirational sophistication of the avocado bathroom and acrylic argyle jumper variety. When he gave up his media career in 2001, Irish broadcasting lost one of its most accomplished (and underrated) practitioners, even if his second act as a property investor seemed fitting for a man of his can-do optimism.

So an unexpected cameo by Murphy on the airwaves should be a cause for celebration, or at least nostalgia. Instead, his appearance on Monday’s edition of Liveline (RTÉ Radio 1, weekdays) is oddly jarring. That’s not to say his contribution isn’t compelling, however.

Having published an article in The Irish Times about Israel’s “degrading” treatment of Palestinians in the West Bank, Murphy sounds uncharacteristically outraged as he tells Joe Duffy about his recent visit there. Most of the incidents Murphy describes are also in his piece, but it’s discombobulating to hear these deeply-felt stories of injustice recounted in that honeyed voice, normally so jocular. The jolting effect is akin to Gay Byrne reciting a manifesto for Marxist-Leninist revolution.

That said, Murphy is no firebrand propagandist. Rather, his vignettes portray the low-level humiliations suffered daily by Palestinians, as when his multi-lingual guide is forbidden by Israeli soldiers to walk down a street with Murphy and his son. When Murphy talks about his own minor dramas, such as being questioned by Israeli security officials on arrival, he adopts a mildly self-deprecating tone. He recalls his warning to interrogators that he would react negatively to aggressive behaviour, but adds that “I didn’t mean I would leap across the table and give a karate chop”. Taking his cue, Duffy suggests that his guest could instead “write a letter to The Irish Times”. Ouch, Joe.

Murphy’s criticism of Israel draws a predictably hostile response. Apparently told about Murphy’s appearance by an Irish friend, Tomer phones from Tel Aviv to explain that the Palestinians are “suffering” – his term – “because Israel has to protect itself from their terrorism”. Helga, another Tel Aviv resident who previously lived in Ireland, admits things are “very hard” for Palestinians, but “that’s their own doing”.

Meanwhile, Murphy’s natural tendency towards good humour sometimes undercuts him. He chuckles lightly as he recalls Palestinian youths throwing stones at a barracks, but recoils at the memory of the tear gas fired to disperse them. Tomer, who is noticeably well-informed about matters such as the other travellers in Murphy’s party, interjects that “stones are dangerous”. Murphy shows his emotions: “If my house had been bulldozed, I could see myself throwing a few rocks at the wall.”

It’s fascinating if depressing. Murphy’s memorable return to radio ensures discussion of the issue continues the following day. But Duffy sounds slightly frazzled by the exchanges, in particular with the strident Tomer. So it’s no surprise that soon he is back dealing with more comfortable gripes, such as the online sale of shoddy mattresses. Murphy, for his part, stands his ground in the face of accusations of bias. “I’m afraid it’s what I saw,” he says firmly. He remains a magnetic broadcaster, even in unfamiliar territory. Murphy’s Middle East? There have been worse programme ideas.

Ryan Tubridy (RTÉ Radio 1, weekdays) travels to the “undiscovered country” of Northern Ireland, an odd way to describe an area 100 miles up the road where 1.8 million people live. Tubridy discovers the Titanic museum and talks to Rory Golden, an Irish diver who explored the sunken ship’s resting place. Discussing the Titanic’s fate, Tubridy asks about those souls who drowned: “Physically, what’s it like to die at sea?” Presumably realising his guest is very much alive, he hurriedly adds, “that’s a strange question.” Indeed it is. At least listeners now know what it’s like to die on air.