The new RTÉ Player: How does it measure up in the Netflix era?

Relaunched for the streaming age, it carries new Player-only shows, but the pre-roll ads remain 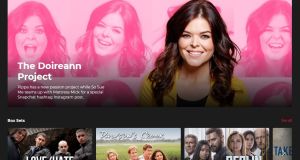 ‘Originals’ aimed at 15-34-year-olds include ‘The Doireann Project’

It’s been in the pipeline for about three years, but a new iteration of the RTÉ Player is finally here – sort of. The new RTÉ Player (beta version) is online now and will be rolled out to mobile and tablet app versions as well as to a range of other connected devices within days.

Described by RTÉ head of online Aoife Byrne as “a massively ambitious project to get over the line”, the new Player is RTÉ’s greatest recognition yet that viewers no longer turn to video-on-demand merely to “catch up” on shows they missed on a linear television channel.

For those younger viewers who may neither own a traditional television set nor subscribe to a pay-TV package, Player apps can be the main port-of-call and perhaps even the only interaction they have with a broadcaster’s brand.

As well as the capacity to stream programmes live (hopefully with less buffering from now on) and on catch-up (alas, no downloads are possible), the new RTÉ Player boasts a modest bunch of boxsets.

These revolve around the catalogue of RTÉ-commissioned drama and comedy from the past decade – Hardy Bucks, Striking Out, Charlie, Can’t Cope Won’t Cope, Acceptable Risk, Clean Break – and some older fare like Bachelors Walk.

All five seasons of Raw (the show Derry Girls creator Lisa McGee did for RTÉ) and Love/Hate are there, plus every episode of Room to Improve.

There’s also an eclectic smattering of international series, from Clique to Swedish Dicks to Berlin Station, while anyone who fancies reliving the Pacey-Joey-Dawson love triangle from the turn of the millennium can do so via all six seasons of US teen drama Dawson’s Creek.

The Player also “resurfaces” archive content – such as the “throwback to 2010” for the “most ridiculous moments” on reality show Fade Street – and has a much greater focus on “original” short-form content.

“Originals” on the RTÉ Player, mostly aimed at 15-34-year-olds, include The Doireann Project, Aoife Dooley’s “pure gas animation” Your One Nikito and a direct attempt to tap into the Instagram demographic with Capsule, a fashion series in which six Irish bloggers talk about clothes.

What can viewers expect in future?

More of the same. RTÉ’s “digital lab” for commissioning short-form content specifically for the Player – part of its five-year strategy plan – will be in operation from January.

The lab, which Byrne says is “not about RTÉ trying to do a ‘dad dance’”, is an effort to woo back the younger viewers who could once be relied upon to watch RTÉ2.

Shorter content is favoured because the average amount of time spent on the Player is 20 minutes. A 10-minute episode (or what used to be called a “webisode”) is often more than enough of a diversion for a dull bus journey.

Last year marked the first time RTÉ put an entire series – mockumentary The School – online before it was broadcast on a linear channel (RTÉ2). It may do more of this kind of thing, or it may adopt the “watch the next episode online now” approach recently tried by Virgin Media Television with its drama series Blood.

What about the ads?

RTÉ Player users may notice some improvements in functionality and the interface, but their old foe – the ads – remain.

For shorter content, expect a “pre-roll” ad of 20 or 30 seconds. For a 50-minute drama episode, expect one-and-a-half minutes at the start, plus a couple of “mid-roll” ad breaks. And if your connection cuts out during the ads, you’re likely to have to go through the whole process again.

Advertising group Core has consistently called on advertisers to stop “regurgitating” their television ads on on-demand platforms, where ads should be shorter to avoid counter-productive frustration.

RTÉ has also said it wants to work with advertisers to introduce “less intrusive” advertising formats within the Player. This might include more branded content along the lines of Jen’s Weekend: London, a travel “original” presented by Jennifer Zamparelli and paid for by Aer Lingus.

No. This is one difference between the RTÉ Player and many broadcasters’ on-demand services. In the UK, users of the BBC’s iPlayer have been required to sign in since last year, which gives the BBC data on the age, gender and location of users and crucially allows it to share that information with the television licence enforcement body.

A key departure between the UK and Irish public service broadcasting law is that UK viewers who only watch the iPlayer are still required to buy a licence, while in this State, the licence fee is tied only to ownership of a television set.

So although not necessary to do so, it is possible to sign into the RTÉ Player and viewers may wish to do so to access features such as the “kids mode” and parental PIN set-up, plus the ability to sync favourites across devices.

Why is RTÉ upgrading its Player now?

Almost two-thirds of the current Player’s audience is under the age of 45. Lured by Netflix, that group is increasingly prioritising on-demand consumption and is being encouraged to do so.

Take, for example, Sky’s latest box, Sky Q: it gives much greater prominence to on-demand options than previous set-top boxes. With Sky the biggest pay-TV provider in the State, it’s hard not to see this change hurting viewers’ affinity for linear channels.

The new RTÉ Player isn’t about competing with Netflix, which has billions at its disposal. It is more about keeping the RTÉ brand alive in a media landscape that has been changed by Netflix. While linear viewing has held up well, the thinking is that in future more viewers will go straight to the row of apps lined up on their connected TVs.

If RTÉ hasn’t got something to offer them, in the right place, with the ease of use they have come to expect, then those viewers will simply click on the next app on the menu.