The housing crisis is ‘even beginning to piss off rich people’ 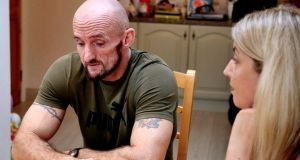 Wayne Kirwin and Charlene Davis: Their situation is far beyond their control

There’s no easy way for RTÉ Investigates: Land of Hope and Homeless (RTÉ One, Wednesday, 9.35pm) to break it to us, but the housing crisis is somehow even worse than we imagined.

Such is the combination of financial squeeze and Irish shame, that a family can discover themselves part of the “hidden homeless”, earning too little to rent or buy, but too much to qualify for assistance.

That translates, roughly, as moving back in with the parents. This frighteningly common predicament is not recorded among the official estimate of 9,700 homeless, nor registered on the waiting list for social housing that now stretches to 87,000 households, according to one report. But they’re all in something like the same boat.

“We’re homeless,” says Charlene Davis, more in disbelief than sorrow, sitting in a home built for one family that now accommodates three. (In addition to her husband and their two children, Charlene’s sister and her child were also forced to retreat here.) The Davises all bear heart-breaking expressions, somewhere between exasperation and unceasing worry. One partner in a couple with two steady incomes, Charlene sits up in her parents’ attic at night, wondering, “Where did I go wrong?”

The horror of her dilemma, as this diligently researched and admirably clear report illustrates, is that the situation is far beyond her control.

Reporter Oonagh Smyth is understandably sensitive in putting faces to the problem. We also meet Eileen Kinch, a woman with two grown children, who can’t find a home to rent within HAP limits; Eva Leahy and her son Sean, who has Aspergers Syndrome, stuck in an intolerable situation in Cork recently exacerbated by a distressing and unnecessary referral to Tusla (“I don’t want to be taken away from my mom,” Sean weeps); and Ray Glover, a single security guard with mental-health issues, who has resorted to sleeping in a tent.

But another face to watch belongs to Eoghan Murphy, the Minister for Housing. Murphy, facing an intractable problem worsened by sluggish bureaucracy, has perfected the technique of readily agreeing with criticism. “Of course it’s not happening fast enough,” he tells Smyth of the interminable delays to the 2016 Rebuilding Ireland strategy, which promised the completion of 50,000 social houses by 2021.

Murphy’s expression – serious, attentive but with the impassive glaze of someone wondering how the hell Health turned out to be the less toxic portfolio – insists that the rate of development will take off in the next couple of years and even exceed target.

But as Smyth outlines the figures, you’d feel slightly more reassured if he just took out a pocket book and started taking notes. “Effectively you’ve got almost 35,000 [more] to do in the remaining three years,” she says of the timeframe. “That’s a massive leap in what you’ve been averaging.”

The examples of actual developments, lucidly outlined, are beyond damning. Places prioritised for development, such as Kilcarbery in Clondalkin and Cherrywood, are either significantly delayed or not even begun.

Yet the epidemic in homelessness is spreading quicker than anyone can contain: in two years, the number of homeless families has doubled to 1,753. Something has got to give.

“Quick fixes leads to quick breaks,” Murphy says in his defence, but in policy terms, that may explain all the breaks. Incentives for commercial development, for instance, have seen a boom in private student accommodation and hoovered up the builders.

Changes in planning guidelines, affecting the height of apartment blocks and thus their potential value, have simply stalled development while investors wait to learn how high they can go.

The new vacant site levy, intended to push such speculators into action, is widely deemed all but inoperable.

By the time Brendan Kenny, deputy chief executive of housing for Dublin City Council, says, “The private sector have to [be] the ones to solve the crisis,” you appreciate just how desperate we have become.

Still, one glum civil servant – shunted from flat to flat, and interviewed, with touching sense of tragicomedy, among a wilderness of drying laundry – is hard to contradict when he says: “It’s at the point now where it’s even beginning to piss off rich people.”

That argument may not have immensely stable foundations, but nor, still, does Cherrywood.

Save us, rich people. You’re our only hope.

Science and the humanities in the time of pandemic: better together
7 `First, they'll try to kill me, then it'll be your turn,' warned the mobster turncoat
8

The Saturday Poem: On the Fifth Day
9

‘Take your clothes off’: Poets reveal their favourite love poems
10