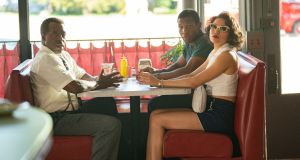 On the evening of March 10th, 1921, the esteemed members of the Boston Hub Club literary and journalistic society gathered around a fireside for a tale of mystery and imagination. St Patrick’s Day was approaching and to honour the occasion a local horror writer had been commissioned to pen a creepy story with an Irish setting. Taking their seats, the gentleman of the club listened, rapt, to the very first reading of HP Lovecraft’s The Moon-Bog.

“Somewhere, to what remote and fearsome region I know not, Denys Barry has gone,” begins Lovecraft in his familiar anachronistic style. “I was with him the last night he lived among men, and heard his screams when the thing came to him; but all the peasants and police in County Meath could never find him, or the others.”

At the time of the recital, Lovecraft was utterly obscure. Today he is a titan of the horror genre. His vision of a vast uncaring universe, brimming with madness, chaos and cruelty (and tentacles) has influenced everyone from Stephen King to John Carpenter, to say nothing of HR Giger’s Alien and generations of video and tabletop games. “Lovecraftian” is a widely deployed synonym for unfathomable terror; the author’s signature creation of Cthulhu has come into his kingdom as geekdom’s very own Mickey Mouse – an octopoid mascot familiar the world over.

Yet if Lovecraft is an icon he is an increasingly problematic one. This scion of a once wealthy Providence, Rhode Island family fallen on hard times was a bug-eyed racist who appeared to live in genuine fear of the Anglo-Saxon bloodline becoming tainted with corrupting influences. He admired Hitler and recoiled from anything foreign or exotic. A brief sojourn in New York installed in him a dread of migrants, those “squat, swarthy strangers with hardened faces and narrow eyes”. He approved of lynchings.

Such prejudices weren’t simply background colour. They are front and centre of many of his most iconic tales. Consider The Shadow Over Innsmouth (1931), whose half-human “Deep Ones”, with their “queer narrow heads with flat noses and bulgy, stary eyes”, serve as a warning against what Lovecraft would no doubt have characterised as “miscegenation”.

The Shadow Over Innsmouth is, in many ways, a masterpiece. A young man is compelled to visit a remote New England fishing town for reasons he cannot entirely comprehend. As he rambles its streets in the listless heat, the slow-rising dread becomes suffocating. The story captures a creepiness specific to fishing villages and seaside towns fallen on hard times. But, much like DW Griffith’s glorification of the Ku Klux Klan in Birth of a Nation, its arguments for racial purity are hard to surmount today.

Lovecraft’s racism is satisfyingly subverted in HBO’s new big-budget series, Lovecraft Country, debuting on Sky Atlantic on Monday. Adapted from the 2016 Matt Ruff novel, and produced by Get Out’s Jordan Peele, it chronicles the adventures of an African-American family in the 1950s as they are pitched into a battle with Lovecraftian cosmic foes.

The point it cleverly makes is that supernatural entities are nothing compared with the ancient wickedness of racial oppression in America. Monsters can be outfought and out-thought. Racism, by contrast, is impossible to banish. Lovecraft would have hated it, which merely adds to the appeal.

Lovecraft believed himself the direct descendent of pure-blooded Anglo-Saxons (though he would briefly marry a Jewish woman and before his death in 1937 at age 46 appeared to have softened in his prejudices somewhat). That the Irish were among the “inferior” races struck him as perfectly obvious.

“If the Irish had the ‘right’ to independence they would possess it,” he wrote to a friend in 1921, the same year he presented The Moon-Bog to his patrons in Boston. “If they ever gain it, they will possess it – until they lose it again. England has the right to rule because she does … It is not chance, but racial superiority, which has made the Briton supreme.”

The Moon-Bog is the only story Lovecraft set in Ireland (though Irish characters appear elsewhere). It paints the natives as a superstitious and subservient rabble. Yet Lovecraft’s Hibernophobia isn’t so flagrant as to obscure the pulpier charms of a yarn that plays out like a cosmic horror take on John B Keane’s The Field.

In ancient (and fictional) Kilderry in Co Meath, writes Lovecraft, stretches a bog beneath which is rumoured to lurk a stone city guarded by an ancient spirit. It has lain undisturbed for millennia. But then in swoops a crass Irish-American, the aforementioned Denys Berry. He restores the local castle and announces his intention to drain the bog. Townsfolk are aghast but Barry is not for turning, not even when the strain of haunting pipes wafts in from the mists.

Barry pushes on with his scheme, drafting in labourers from the north. After three nights of troubling dreams, our nameless narrator – an American friend vacationing with Barry – awakens to see a ruin on the bog pulsating with red light. In its glow the labourers dance with ghostly wraiths. Together they parade into the bog and slip beneath its waters.

Later, as he flees, the narrator notes that the bog is now overrun by huge frogs (the labourers transformed into vile amphibians, it is hinted). In the red mist, meanwhile, he sees the outline of a figure held by wraiths: his old friend Barry. Our hero is discovered the next day wandering and mindless.

The Moon-Bog could really be set anywhere rural and swampy, though Lovecraft does reference the Book of Invasions, a prose and poetry cycle chronicling the arrival to Ireland of several waves of conquering tribes. He explains that the “children of Partholan” came to Ireland from ancient Greece and were buried at Tallaght. There is just one exception: the restless spirit beneath Kilderry bog.

“What… [sticks] out for me is the racism,” says Brian Showers, founder of Swan River Press, an independent Irish publishing company dedicated to gothic, supernatural, and fantastic literature. “The Moon-Bog … stands as one of his inferior stories – as opposed to something like Shadow Over Innsmouth, which is also drenched in racism, but works better as a weird tale.”

“The Irish natives merely appear as an inarticulate mass of unease,” writes Rob Brown in his essay Hybrids and Hyphenates: HP Lovecraft and the Irish. “Or [they] are reduced to ‘a throng of lurching labourers who followed dog-like with blind, brainless, floundering steps as if dragged by a clumsy but resistless daemon-will’.”

Lovecraft would make his disdain for the Irish even more explicit. When, at the conclusion of The Rats in the Walls (1923), unfortunate anti-hero Delapore descends into a condition of savagery, Lovecraft illustrates his downfall by having him regress from speaking Middle English and Latin to degenerate Irish. “Magna Mater! Magna Mater! . . . Atys . . . Dia ad aghaidh ‘s ad aodann . . . agus bas dunach ort! Dhonas ‘s dholas ort, agus leat-sa! . . . Ungl . . . ungl . . . rrrlh . . . chchch … ” Irish is just one rung above Neanderthal gibberish.

The irony is that for all his disdain of the Irish, Lovecraft, early in his career especially, was hugely influenced by Co Meath fantasy writer Edward Plunkett (there are parallels between the plot of The Moon-Bog and Plunkett’s The Curse of the Wise Woman). Of course, as the 18th baron Dunsany Plunkett would have struck Lovecraft as the “correct” sort of Irishman: titled, Anglo-Irish, educated in Britain.

“The majority of men who have brought eminence to Ireland are nearly or wholly Anglo-Saxon by blood,” he wrote. “Lord Dunsany is frankly an Englishman, with not one drop of the Celt – a Cheam School, Eton, and Sandhurst man whose voice and accent are as Londonese as any I have ever heard, and whose sympathies are ardently with the Empire.”

An exception is likewise made for the Irish protagonist of The Horror at Red Hook (1925), set in Brooklyn and described by science-fiction publisher Tor as “his most bigoted tale”. Detective Thomas Malone is “a Dublin University man born in a Georgian villa near Phoenix Park”. Irishness imbues in Malone “a Celt’s far vision of weird and hidden things”, Lovecraft explains, though it is implied that these whimsical tendencies are countered by his rational British education.

“Given Lovecraft’s reverence for Dunsany, I’d say that Lovecraft subscribed to the notion of the ‘right kind of Irishman’, where some Irish received a pass, while others simply did not,” says Showers. “This isn’t uncommon at all, of course. I’m reminded of William Hope Hodgson’s The House on the Borderland, which also features native Irish speakers portrayed as furtive and gibbering.”

Curiously, his racism has had little negative impact on his popularity. Far from consigning him to obscurity, Lovecraft Country, if anything, looks set to introduce Lovecraft to a new generation of readers. Meanwhile, publishers and game and toy companies proceed with pumping out paraphernalia related to his “mythos” of eldritch gods and tentacled entities.

The unravelling of Lovecraft’s reputation as an author and a person continues to gather momentum. But Cthulhu will live for ever.