TV review: The RTÉ host is like the Ghost of Holiday Plans Past in No Place Like Home 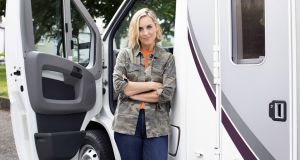 RTÉ One’s new Sunday-evening show, No Place Like Home, begins with a quotation: “So long for air to brighten, time to be dazzled and the heart to lighten.” It is, of course, H from Steps, or possibly Seamus Heaney. All I know, really, is that this programme sees Kathryn Thomas in a van, navigating the byways of Ireland. I rub my hands in anticipation.

It turns out that she’ll actually be driving a camper van – and that this is a gentle Ireland-focused travel show unfortunately timed to coincide with some new travel restrictions.

So No Place Like Home features both lovely prerecorded travel segments and live bits in which Thomas sits in the gardens of the Museum of Literature Ireland, on St Stephen’s Green in Dublin, talking with the travel journalist Eoghan Corry about what’s still allowed.

A nifty house band, The Homebirds, play country music. This is presumably to warn Dublin-based viewers that they’ll hear nothing else on the radio once they get beyond Bray

For these segments Thomas wears a flowing white dress to indicate, I think, that she’s the Ghost of Holiday Plans Past. And there’s also a nifty house band, The Homebirds, who play country music. This is presumably to warn Dublin-based viewers that they’ll hear nothing else on the radio once they get beyond Bray. To quote an anonymous source in Montrose: “It was this or a clip from Deliverance.”

The first segment is great. It features Thomas on the road to Wexford in her camper van with a new reporter named Ellie. Ellie is a contrarian, there to disagree with Thomas and provide what RTÉ typically calls “balance”. She sits beside Thomas as she drives, strapped to a special car seat like the one Marty Morrissey uses, making blunt pronouncements of the kind beloved by Newstalk presenters. “That’s the sea!” she declares – and, frankly, it’s refreshing to hear someone just telling it like it is.

Thomas seems a bit scared of Ellie. On a visit Johnstown Castle they get into an argument about whether a large colourful bird is a peacock or a chicken. Ellie’s salt-of-the-earth conviction is far more compelling than Thomas’s MSM groupthink. “It’s a chicken!” Ellie insists, and there’s no doubt in my mind that it is in fact a beautiful chicken with that bird’s customary multicoloured plumage. Take that, liberal media.

Now, since writing the previous paragraph it has come to my attention that Ellie is Kathryn Thomas’s two-year-old daughter, which puts things in a different light and speaks again to nepotism in the State broadcaster. Suffice it to say, as someone who regularly gets into heated arguments with children – children are regularly wrong about things, I find – I have newfound sympathy for Thomas. But it was clearly a chicken.

There are some further shenanigans: kayaking, a barbecue (at which Thomas says she’ll feel better once she finds the bottle opener, a light-hearted nod to the nation’s alcoholism) and a conversation with a famous rugby man who looks like a scale model of a human hand.

Then we join Jake Carter and Karen Byrne on a road trip around Connemara. RTÉ has clearly cheated here and done all of this with CGI. I refuse to believe anywhere is this beautiful. Carter and Byrne ride horses (presumably locals in pantomime garb), eat fine food in a beautiful old railway carriage from the set of Murder on the Orient Express (I well believe that someone was killed there) and then go on a boat to see the awesome Fjord of Killary (fjords aren’t even a real thing).

Carter and Byrne first found love on RTÉ’s Dancing with the Stars, a show in which love is apparently left lying all over the place, and they are pretty good company. I am particularly struck by Byrne’s evolving relationship with horses in the horse-riding segment. It begins with the sentence “Why is he staring at us?” (good question) and ends with her noting approvingly that her steed, Dougal, doesn’t “talk back”. For context, Carter spends some of his horse ride bellowing lyrics from You’ll Never Walk Alone despite (a) being on a horse and (b) the aforementioned hint that he may soon walk alone.

You’d miss Ellie from part one, though. I want her to tell them that Dougal is a chicken and see what happens.