In 2014 I wrote that the legal drama was the best show around – the news of its demise, and a few dodgy seasons since, haven’t changed my mind 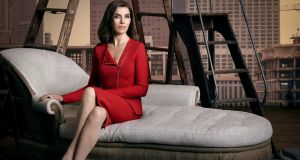 The Good Wife: a stylish period drama about now

The Good Wife is, seven long seasons in, not quite what it once was. It’s lost some of its power-interrogating momentum as key characters departed (we miss your smirk Will Gardner) and the show became a bit self-parodyingly repetitive. And yet . . . it’s the programme that proved there was still life in episodic network drama and it’s still consistently sharp, witty, morally ambiguous and entertaining.

All in all, I still stand by everything I wrote in 2014 when I explained why it was the best thing on television (see below).

The Good Wife: the best-made, most nuanced show on television

Alicia Florrick stands apart from most of the middle-aged television protagonists to be found angrily meth-dealing and politicking their way across our television screens. She’s impassive, not prone to emotional outbursts. She’s law-abiding and works for a high end law-firm. She’s morally complex but not quite an anti-hero. And she’s a woman, which (to paraphrase Ginger Rogers) means doing everything Bryan Cranston does backwards and in heels.

The Good Wife, the programme in which the character features, is different from the more hyped US dramas in other ways. It doesn’t come from the subscription TV channels such as HBO, but CBS, a network station where swear words are forbidden, ultra-violence is restricted and nudity is banned. Furthermore, while it features lengthy, complex story arcs, it conceals these in an episodic structure that wouldn’t be unfamiliar to fans of CSI or Magnum PI.

The show takes as a starting point that recurring US political ritual, the public apology, and takes as a protagonist the impassive wife standing dutifully beside the disgraced, adulterous politician. But then it does something interesting – it pushes this to the background. Unlike other dramas, such as Homeland or 24, which pummel viewers with their high concepts until all logic collapses, creators Robert and Michelle King have made this political scandal the mere backdrop for a seemingly straightforward legal procedural.

You see, when Alicia Florrick’s (Julianna Margulies) prostitute-frequenting governor husband (Chris Noth) is jailed for corruption, she returns to work as a lawyer, working at Lockhart/Gardner, the firm of her former boyfriend, Will Gardner, played by Josh Charles (nobody told her about the Walter White option – learning to cook crystal meth). She is, of course, very good at being a lawyer.

Now it’s easy to dismiss The Good Wife as yet another frothy legal drama filled with pretty people having love triangles (I did just that in a review back in 2010) but it’s actually the best-made, most carefully calibrated, morally nuanced programme on television.

On the surface, The Good Wife does for the sleek legal workplaces of 21st-century Chicago what Mad Men does for the advertising firms of 1960s New York. Furthermore, the case-of-the-week storylines are culled from very recent news pages, just as Mad Men’s plots are pulled from social- history books. There are stories about the virtual currency Bitcoin, internet privacy, drone-warfare, the hacking activities of Anonymous, fraternity hazing and the civil war in Syria.

Then there are the principal characters. They’re all charming, verbally dextrous and attractive, but they are also deeply flawed. Will Gardner, who initially seems like a kind, functional alternative to Alicia’s faithless jail-bird spouse, is ruthless and amoral. His partner, Diane Lockhart (Christine Baranski), a powerful older woman with no regrets (a rare thing on TV), an attraction to moustachioed libertarians and a picture of Hillary Clinton on her desk, puts her liberal values aside when convenient. Fan favourite, the Machiavellian campaign manager Eli Gold (Alan Cumming), is a scenery-chewing heel who has no problem intimidating teenagers, smearing opponents or vote-fixing. And while Alicia is a highly skilled lawyer and mother, her status is bequeathed to her by powerful men, and she is regularly compromised.

Yes, the irony of The Good Wife is that its title character isn’t very “good”. Her goodness is only relative to the more explicitly debauched characters that pass through. The lawyers at the firm are very effective – so much so they become suspected of judicial bribery – and we always want them to win. But they are as likely to work for amoral corporations, murderers and drug dealers as they are to help rape victims or victims of workplace bullying.

So between the show’s twin poles of law and politics, and within its case-of-the-week structure, the writers tease out troubling issues of race, gender, class and privilege. They consistently demonstrate how American institutions are biased in favour of those with wealth, and how high ideals are undermined by self-interest. In an episode in which Alicia helps an abused worker start a union, Lockhart-Gardner crushes the union-building activities of their own overworked secretaries. In another episode, Alicia betrays a colleague in return for a promotion.

And as the world of The Good Wife grows, populated by complex subplots and an expanding cast of quirky legal types, politicians and criminals, it becomes clear that this is a programme all about power – political, professional and personal power – who wields it and how it is best manipulated.

Someone once referred to The Good Wife as “The Wire lite” but it’s really “The Wire de luxe”. While David Simon’s show explored the crumbling American dream from the bottom up, The Good Wife analyses it from the top down. It presents a view of institutional decay from the seductively well-appointed offices of the 1 per cent. It has a grand scope. But unlike say, Breaking Bad, which was gung-ho about breaking new ground, The Good Wife wears its considerable ambition lightly. On the surface it’s just a legal procedural, but like Alicia Florrick herself, you underestimate it at your peril.