Illustrator Adam Ellis says he’s being haunted by a child ghost. Twitter is lapping it up. 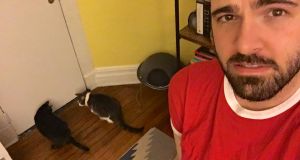 Since the inception of Twitter, the microblogging platform has mainly been used for instantaneous coverage of current events and pithy commentary that relies on punch ahead of depth. That’s not to say more expansive uses for the format haven’t been deployed, but up until recently, its potential for deep, longform narrative writing hasn’t been its killer selling point. In the past week, however, a particularly ingenious ghost story has shown some of what Twitter could be capable of as a storytelling media.

It all began when Adam Ellis began telling the story of Dear David, a stirring and occasionally heart-stopping tale, in a series of tweeted plotpoints spanning the past three weeks. Like all gripping yarns, it’s best read in its uncut form – with some judiciously selected mood lighting perhaps – but for the unitiated, a précis runs as follows.

10 Kathy Sheridan: What was the purpose of Brian Stanley’s tweet glorifying mass killings?

11 Michael McDowell: Time to wake up and smell the coffee over Sinn Féin

12 ‘It has to stop’: Republican Georgia election official lashes out at Trump

13 Kia’s spacious Sorento is like a sittingroom on wheels

14 Pfizer/BioNTech vaccine: what you need to know about UK approval

22 Lab-grown meat is approved for sale in world first

26 Unemployment soars to 21% on foot of tougher Covid restrictions

36 Róisín Ingle: How are you? Three little words that hold more weight than ever

37 Will income taxes have to rise to pay for Covid-19 crisis?